Ospreys (Pandion haliaetus) are experiencing resurgence in Oakland County.  The comeback story of these amazing raptors – they dive into shallow water to catch fish – is perhaps nature’s finest salute to the Wilder Side of Oakland County, and the habitat protection efforts of the Michigan Department of Natural Resources (MDNR). 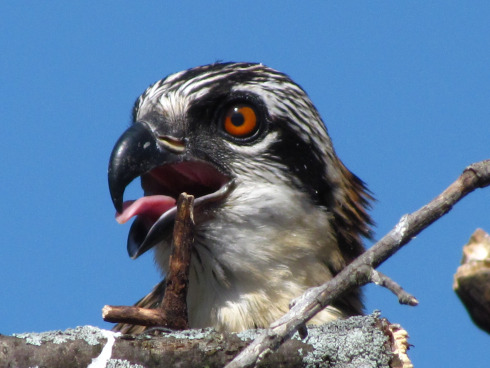 A juvenile osprey peers out of the nest.

Back in 1988, the MDNR instituted a hacking program at Kensington Metropark.  Hacking involves placing male osprey chicks (removed from active nests in northern Michigan) in special elevated structures above a water source. The young birds are then fed through a partition and cared for by volunteers. As they grow, the osprey imprint on the area and after a seasonal migration, the males find mates and returned to the same area where the hacking took place.

The hacking program was quite successful, and ended in 2008. Prior to its start, there were no ospreys nesting in Oakland County. Wildlife biologist Julie Oakes of the MDNR confirms that as of July 2014, Oakland County has nine active osprey nests; all but one are located high up on cell towers.  One of those cell tower nesting sites is a few seconds flight from Highland Oaks County Park, an Oakland County Park offering ideal osprey fishing grounds at the glacially created Spring Lake. 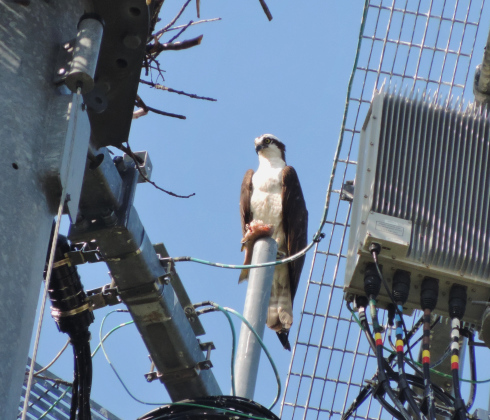 Osprey feeding on a freshly caught bass high up in cell tower.

The increased presences of osprey are a tribute to the efforts of park managers throughout Oakland County and a new sense of responsibility to protect wild lands and lakes.

Ospreys are not able to dive more than three feet beneath the surface of the water and tend to gravitate towards shallow, quiet lakes for their hunting expeditions.  Oakland County is rich with these types of lakes, and sightings of these beautiful birds are no longer rare occurrences at Addison Oaks, Highland Oaks, Independence Oaks and Rose Oaks County Parks. These magnificent birds of prey, with their five- foot wing spans, search for fish by circling over relatively shallow water. When a fish is visible, one of the greatest dramas of the Wilder Side of Oakland County unfolds in lightning-fast fashion. 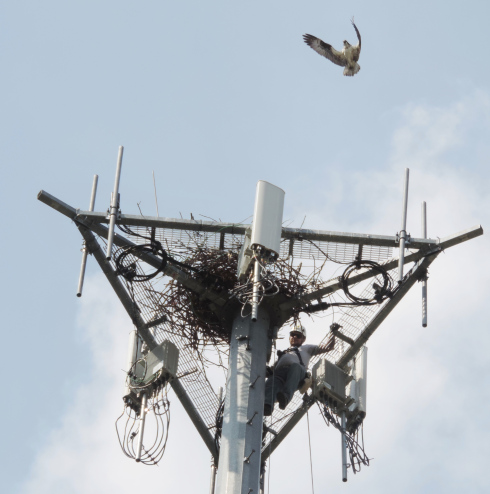 A professional cell tower climber at work with the Michigan DNR, as an adult osprey hovers above the nest.

SPECIAL NOTE:  All photos were shot at different sites in Oakland County, while the author worked with officials from the Michigan DNR on various osprey banding projects.