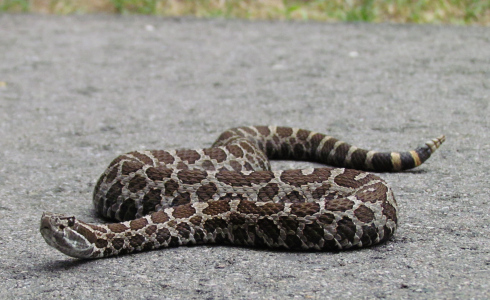 The Eastern Massasauga Rattlesnake is a true pit-viper; the only venomous snake found in Oakland County. They are well camouflaged, docile and secretive and would rather escape than strike when threatened and that may explain a fact noted by emergency medical professionals:  on the rare occasion when a rattlesnake strikes it almost always occurs on the dominated hand of an intoxicated male.  “Hey Joe, Watch at this!” may just summarize the foolish bravado behavior that precedes most encounters between two species, homo sapiens and Sistrurus catenatus catenatus.   Humans are not on the menu, but these highly skilled ambush hunters use their heat -seeking pits to target small rodents and frogs.

Winter was not a problem for the rattlers that live in our midst.  Late last fall they slithered off to moist crayfish burrows in wetlands and small mammal burrows in marshlands for their season of hibernation. Unlike other rattlesnake species research shows they usually hibernate alone.  But now that snow has been gone for more than six weeks they are on the move in their usual slow-slither pace.  During early spring their homeland hunting range was mostly meadows and wetlands with time out to bask in sunlight. Sometimes, especially in late afternoon, that basking occurs on warm paved trails. 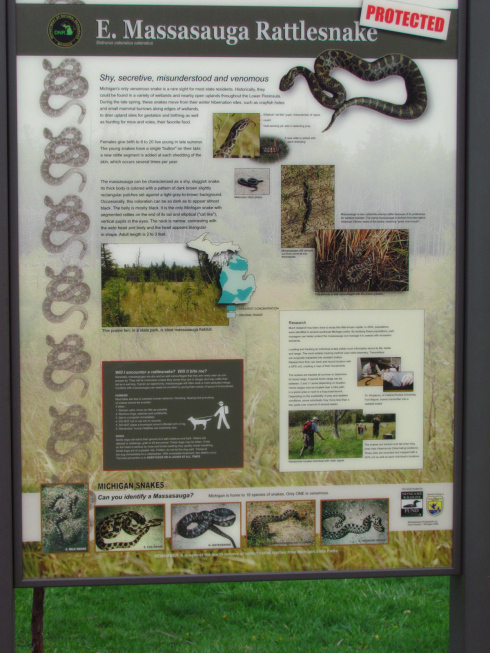 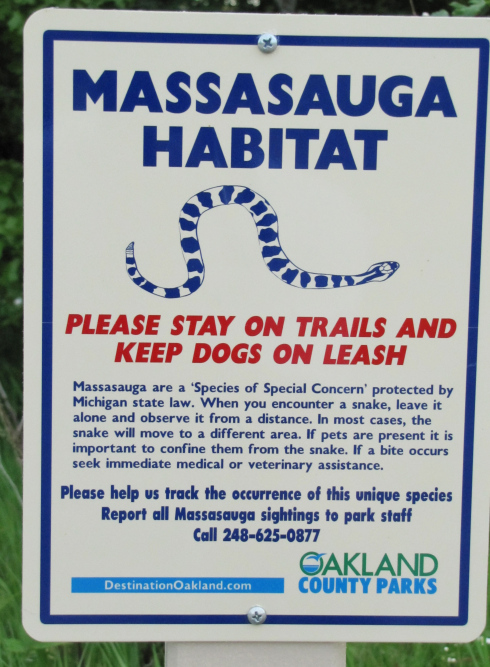 The massasauga is a beautiful reptile, an important component of natural systems and if that is not enough reason to leave them alone they are protected by Michigan State Law.  The Michigan Department of Natural Resources lists the massasauga, as a “species of special concern” and the U.S. Fish and Wildlife Service is evaluating the Great Lakes population of Massasaugas to see if they should be listed as a threatened species.  Many humans confuse our little swamp rattler (they are seldom more than two feet long) with the northern water snake, fox snake or the milk snake.  One definitive clue is the shape of the pupils; they are vertical slits, cat-like in appearance.  But getting that close is too close!

Park agencies often place signs advising of their presence but with a bit of common sense the wilder side of Oakland County is perfect habitat for humans and the massasauga. 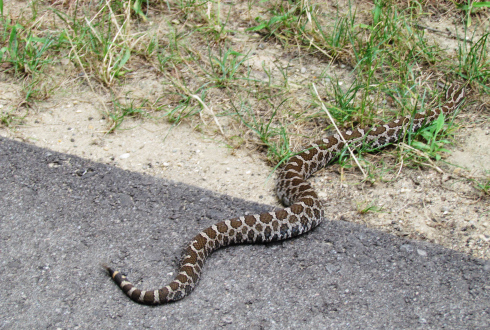 An adult massasauga slithers off a Metropark trail with a warning rattle-buzz goodbye.

One thought on “Home of the Eastern Massasauga Rattlesnake!”