Oakland County families and out of county visitors are flocking to the campsites, cabins and yurts of Addison Oaks County Park for warm weather fun. Addison Oaks is the perfect place for outdoor recreation and nature exploration in a landscape rich with wooded hills, open meadows, wetlands, a sparkling lake with fishing and non-motorized boating and endless trails for hikers, cyclists and equestrians. But for the magnificent Sandhill cranes of Oakland County, Addison Oaks is more than an exciting close-to-home vacation getaway – – Addison Oaks is the perfect place to raise a family. The marshes and tall grasses provide nesting cover and a healthy mix of insects, grains, amphibians and even the occasional mouse or meadow vole to satisfy their big bird appetite. 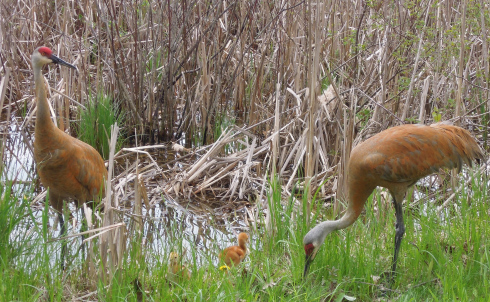 And the sandhill cranes of Addison Oaks have a bonus; the watchful eyes of Sgt. Kelly Sexton of the Oakland County Sheriff’s Office who is in charge of the Parks Division. While on patrol near the campground she encountered one pair of watchful cranes with their newly-hatched chicks foraging for bugs and beetles and captured these images. Sexton stated, “I tried to get a bit closer to the cranes for a better photo but one of the parents made it quite clear by hissing at me that I was close enough—–it was an awesome sight to see.” 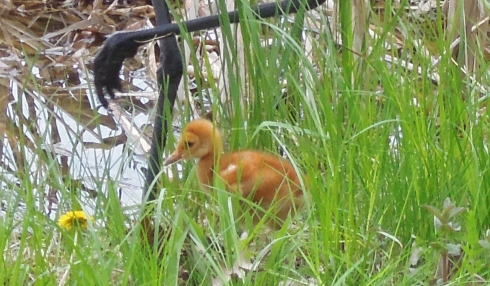 Sandhill Cranes with their crimson caps and magical songs that carry almost a mile and graceful flight have an elegance that draws attention. Even though they stand four feet tall and have a five foot wing span they often hide in plain sight among the cattails and reeds and retreat into the wetlands to avoid terrestrial predators. But now that the chicks have hatched it’s all about parenting and keeping an eye on the chicks. The chicks stay with their parents all summer but in about two months they will be nearly independent. By the time the sassafras leaves of autumn turn deep scarlet and the sugar maples are golden the young cranes are ready to migrate south with their parents. And you can bet that Sgt. Sexton and the deputies that patrol our parks with pride will be ready to greet the Sandhills when they fly away home again to the Wilder side of Oakland County in the Spring of 2015. 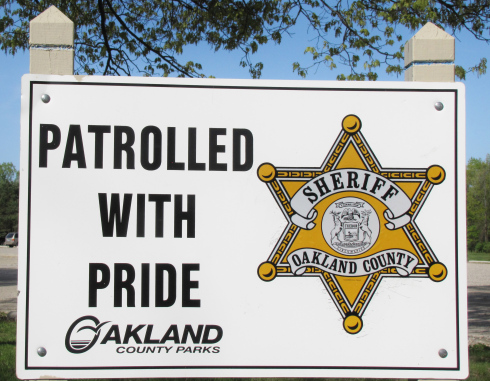