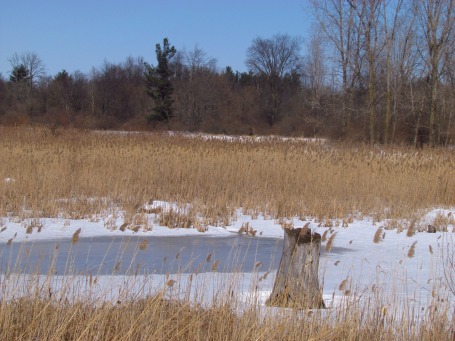 The American bald eagle – the largest raptor in the skies of Oakland County – has been a spiritual symbol for Native Americans for hundreds of years before this majestic raptor became our national emblem in 1782.  Today we find the bald eagle on the silver dollar, half dollars, quarters and much of our paper money.  Images of an eagle clutching arrows and an olive branch are proudly displayed on our diplomatic missions and embassies around the world.

The eagle has made a dramatic comeback since the banning of deadly pesticides and continues to reclaim its traditional habitat as it adapts to a changing human-dominated environment.  And as the winter of 2014 slowly wanes bald eagles are once again being seen on the eastern fringes of populous Oakland County. 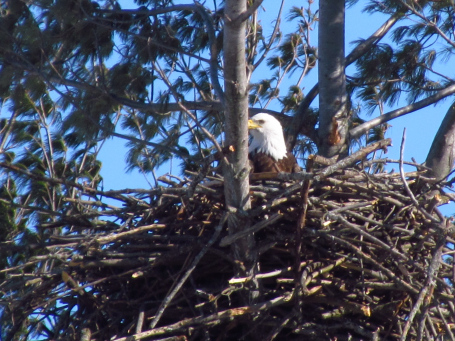 Last year was a historic year for bald eagles.  Stony Creek Metropark spans Oakland and Macomb counties and a pair of bald eagles nested in a secured section of that park high up in a lofty pine tree. That pair of bald eagles produced a chick that grew to maturity and fledged in July creating a flurry of excitement among birders and nature lovers.  Technically speaking those eagle are residents of Macomb County with the nest being located on the Macomb side of Stony Creek. But eagles know no borders and fly freely under protection of the laws of the Michigan Department of Natural Resources and the U.S. Fish and Wildlife Service.  And they hunt the fields and fish the lakes of both counties.  The eagle pair is back.  And once again their forays for food take them into the wilder side of Oakland County. 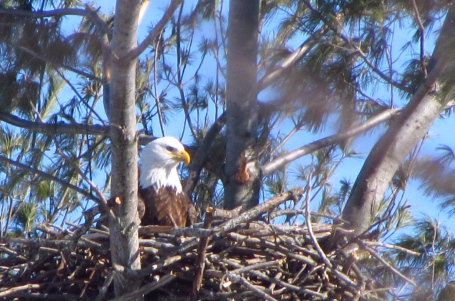 The eagle surveys her kingdom from the enormous nest high up in a white pine tree.

Earlier this week while trekking on snowshoes on a brilliant sunny day I had the privilege to witness one of the eagles in their well-constructed nest.  I later discovered another hiker equipped with a telephoto lens and detailed knowledge of the eagle’s habitat and habits from hundreds of hours of observation had captured an image of the birds mating high up on tree limb just hours before my visit. 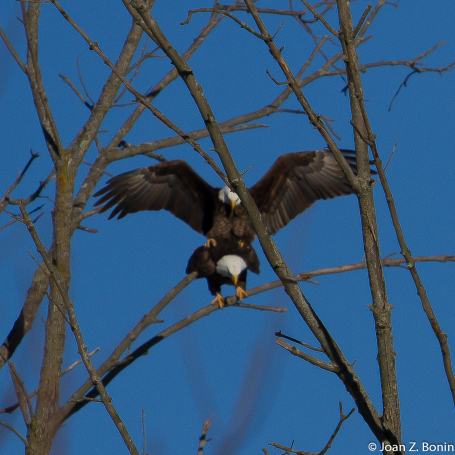 The eagle paired mated again during the last week of February 2014. Image captured by Joan Z. Bonin. All rights reserved.

Aldo Leopold penned in his classic work, The Sandy County Almanac, “There are some who can live without wild things and some who cannot.”   The eagles in our midst – just 10 miles from downtown Pontiac as the eagle flies – are a living salute to those that cannot live without wild things and a tribute to all park agencies and individuals that strive to protect habitat.

4 thoughts on “Eagles Know No Borders!”