Oakland County Executive L. Brooks Patterson is seeking the best of the best for the 2014 Class of Elite 40 Under 40…and you have the opportunity to pick the 2014 winner! 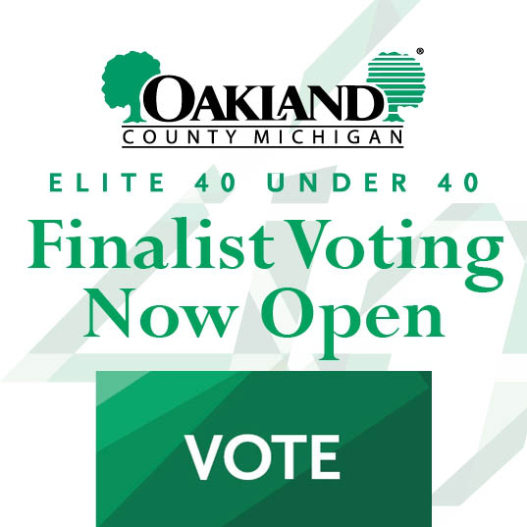 We’ve narrowed down the Elite 40 Class of 2014 members to the Top 3, and it’s up to the public to pick this year’s winner. Individuals may vote once every 24 hours, now through Friday, January 31st at 5:00 p.m.

Past winners include Erica Coulston, Class of 2013 and Owner of Walk the Line to SCI Recovery, and Hajj Flemings, Class of 2012 and CEO/Founder of Brand Camp University.

Voting starts January 27th, but don’t delay because it’s only open until the 31st! Individuals may vote for themselves and/or others for the 2014 class. The winner of the 2014 Class, as well as the other 39 Elite 40 class members, will be announced at the 2014 State of the County address on February 12th. The winner will introduce Patterson before his 20th address as Oakland County Executive. Additional prizes for the winner, 2 runner-ups, and 37 finalists can be found HERE.

To VOTE or learn more about the Elite 40 Under 40 program (including past winners, classes, official rules, and awards), visit www.AdvantageOakland.com/Elite40.