Exciting mysteries unfold in the ever changing storybook easel we call snow; tales of predator and prey, life and death and the endless search for food by creatures that wander through winter.   Encounters with the natural world await hikers, cross country skiers and those that trod the woods of winter on snowshoes.  The secret to reading these stories in snow is careful observation of the tracks and heading out the day after a fresh snowfall, unless winds masked the new wildlife tracks.

Tiny bounding foot prints of a white-footed mouse are perhaps the most common tracks of all in snow covered woodlands. They are unmistakable and the occasional drag mark of the tail is an extra clue little kids love. Sometimes the trail ends in a clump of shrubs where the mouse climbed up to an empty bird nest it converted to a cozy home out of reach of four legged predators.  And other times it disappears into a tunnel in the snow or where the mouse tracks end at the pounce mark of a fox. 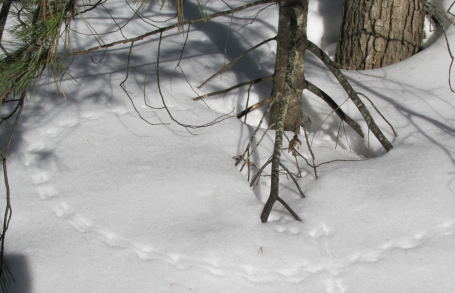 Mice leave tiny bounding tracks in the snow, even when they seem to run in circles

Meadow voles, sometimes called meadow mice, are tiny grass and bark eating rodents that stay active all winter under the snow girdling small shrubs and ornament plants to the chagrin of homeowners.   When on the surface their tracks can easily be differentiated from the bounding and leaping foot prints of white footed mice.  The voles leave alternately placed footprints unlike the opposite placed footprints of the mice. 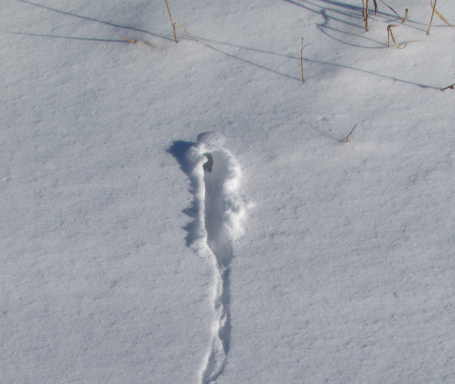 Wild turkeys may be wary but their large tracks in the snow are easy to find.   Sometimes it is the trail of an individual bird but more often than not the tracks of an entire flock are encountered lending a hiker to believe they are following a herd of miniature dinosaurs tromping through the woods. 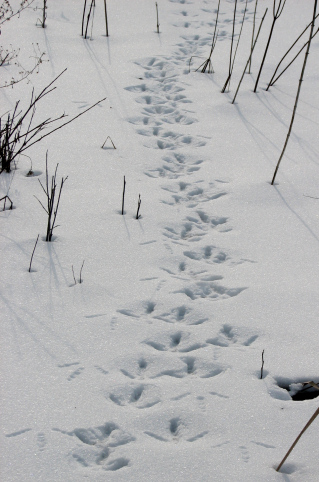 A flock of turkeys or was it a herd of baby dinosaurs?

Deer may hide in frozen swampland but an experienced  observer can tell much of the deer’s habits and travels by its tracks. Was it moving stealthy through the woods or fleeing in a burst of energy from a human intruder leaving deep imprints in its wake? 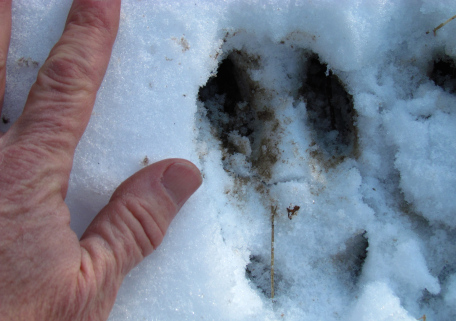 Rabbit tracks present a question four year olds can answer and adults fumbled at and often fail: Which way did the rabbit go? The hind feet are larger than the front feet and it’s the hind feet that point the direction of travel.  When rabbits hop the hind feet land in front of the front feet and point the direction of travel.   Rabbits face many perils in winter; they are favorite entrees for great horned owls and more than a few rabbit tracks ends under the outstretched wing marks of a great horned owl. 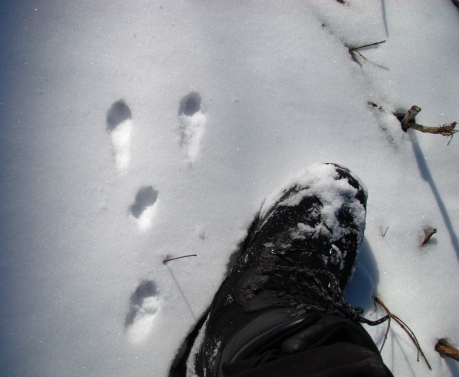 The hide feet, larger than the front feet point the direction of travel when a rabbit hops

And then there are the tracks of humans after a fresh snow.  Their tracks may be disguised by skis or snowshoes, but let a human boot track melt and distort in the sun for a few days and it distorts and grows in size until the resemble the trial of Sasquatch! 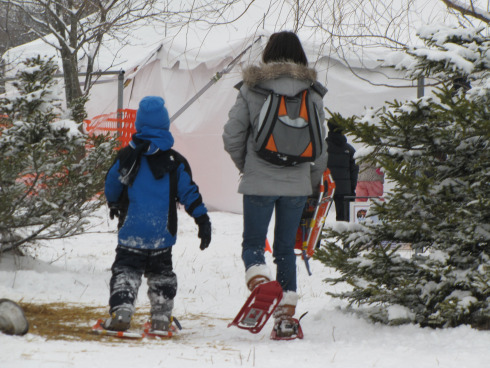 Humans leave all sorts of tracks and trails; snowshoe trails may seem to indicate Sasquatch!

One thought on “Tracks and Trails – Secrets in the Snow”