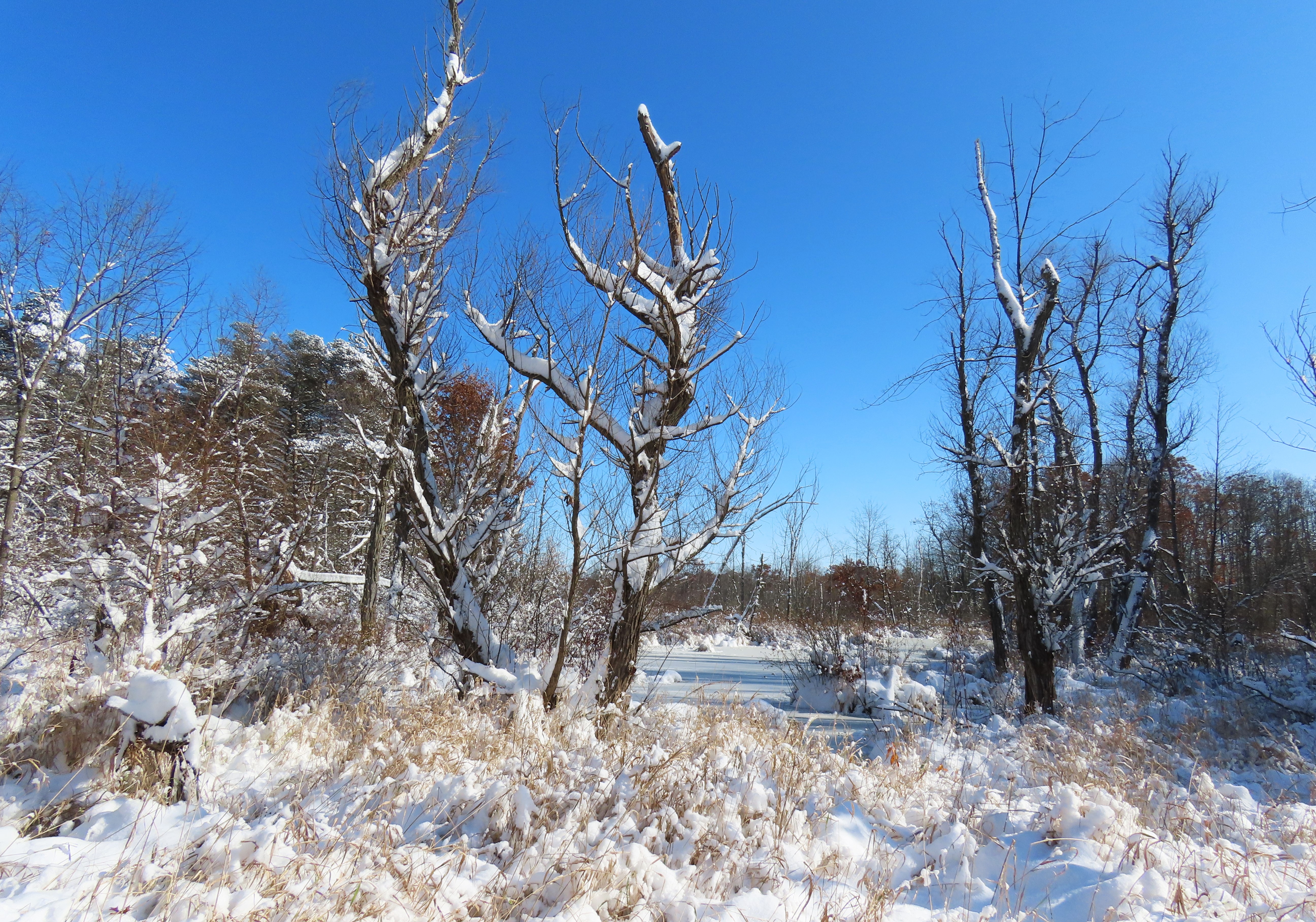 On the sunny afternoon of Friday, November 9th, I hiked the heavily wooded northern section of the Ortonville State Recreation Area and was surprised to discover thin layers of ice had formed on small hidden lakes located between the steep hills of this State protected wildland. Dry leaves, pushed by gentle winds, seemingly danced across the frozen surfaces and my hiking companion and I joked that it almost looked like winter arrived early, especially when we noted traces of snow from the night before on fallen logs and fungi.

With darkness descending and two more miles to go, we paused only briefly to admire an enormous white pine that had survived the saw of early settlers, and not far from that stately tree, the remains of a Wild Turkey that had fallen prey to a stealthy creature, most likely a coyote. The delicate but hardy spider-like yellow blossoms of witch hazel drew our attention, but was no surprise, for it blooms in early November and is sometimes overlooked amidst a kaleidoscope of autumn leaf colors. It was a really great autumn hike on the northernmost fringe of the wilder side of Oakland County. We decided the steep meandering trails would be a challenging, yet fun, place to cross country ski once winter arrived.

The Oakland County Sheriff’s Office had news to share about winter’s snowy arrival and on Monday evening they shared this post on Facebook: “We have closed many roads due to the conditions today and in just (1) eight hour stretch we responded to 123 property damage accidents, 8 Injury accidents, and 40 road run-offs.” On Tuesday afternoon, the US National Weather Service Detroit / Pontiac Michigan shared record breaking winter storm news on their Facebook page: “The snowfall that started early November 11th and lasted into November 12th, ranks as the biggest November winter storm in Detroit! Total snow accumulation at Detroit was 9.2 inches, breaking the old record of 9.0 inches, set back on November 15-16, 1932.” Many Oakland County residents awoke to more than eight inches of snow on Tuesday morning. The snow measuring ruler I maintain in my Brandon Township wildflower meadow, one of the higher elevations in the county, confirmed exactly 11 inches of snow.

Winter, however, does not officially arrive until December 21st, and that is still 38 days away. As I write these words on Wednesday morning, November 13th, Oakland County and the Midwest are locked in a deep freeze. According to the National Weather Service, we hit new record-breaking single digit temperatures across Southeast Michigan. The temperature outside my window read 5 degrees just after sunrise on Wednesday as I trudged back outside to restock the bird feeders.

Winter can be a challenging season for wildlife, but most species will survive rapid temperatures shifts rather well, with the possible local exception of the Virginia opossum. This southern species has been steadily moving northwards for decades, but has not adapted well to extreme cold and rapid temperature fluctuations. Unlike masters of survival in cold weather such as red foxes and coyotes that have heavily furred tails, the tail and ears of the only Michigan marsupial are hairless and highly susceptible to frostbite during cold snaps. During extreme cold, these mostly nocturnal creatures that live in our wildlands, suburbs and cities will forage in the daylight. Frostbite injuries to their prehensile tail and ears may be noted, as in this image I captured several years ago during another early deep freeze. 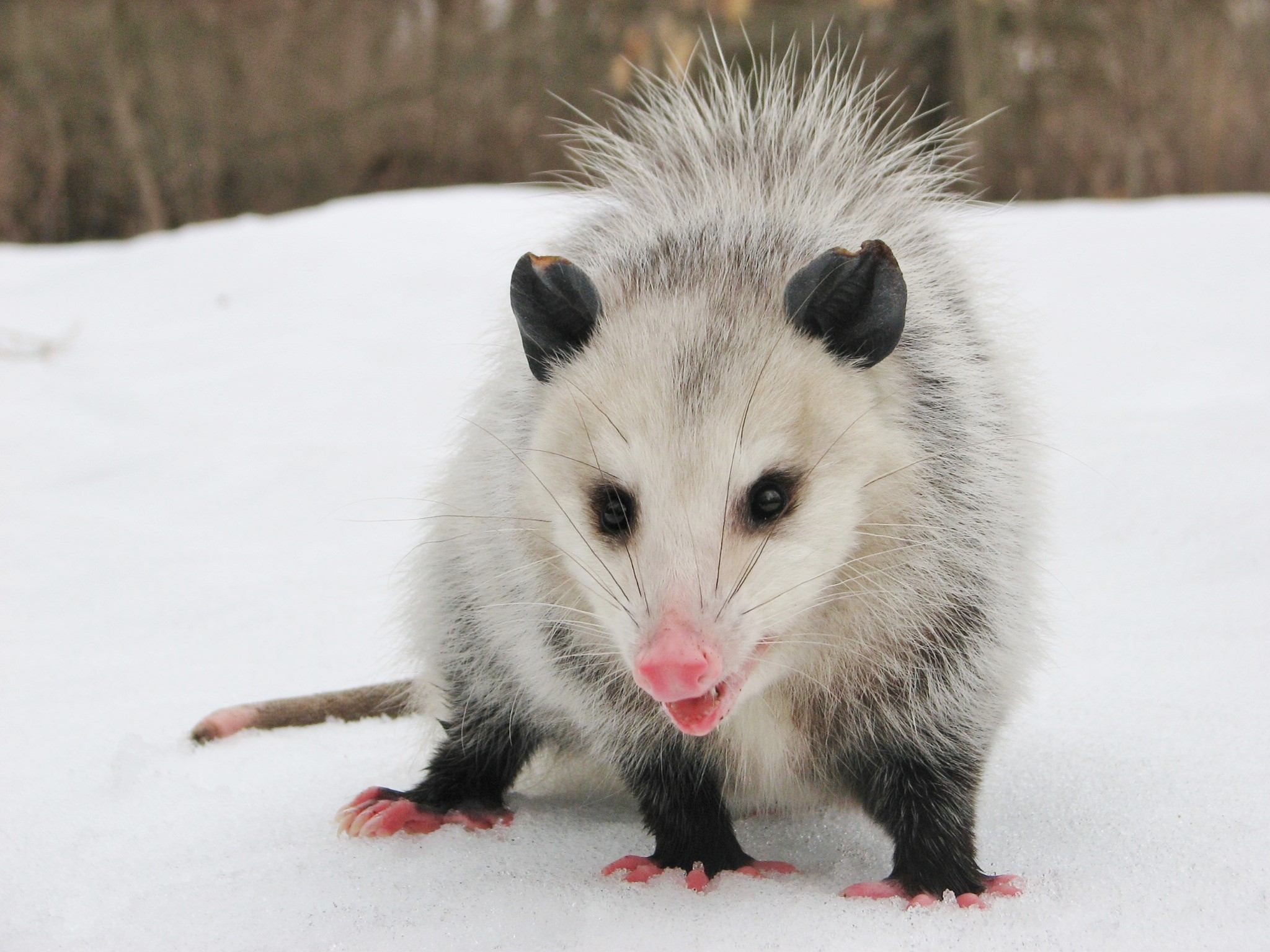 Migratory bird species such as hummingbirds and vireos left weeks ago when hours of daylight shortened, and for bird species that remain here, it is life as normal. A Pileated Woodpecker pounded away on a dead black cherry tree for hibernating insects as it often does, but the real action occurred at my bird feeders that I stocked with black-oil sunflower seeds and suet. 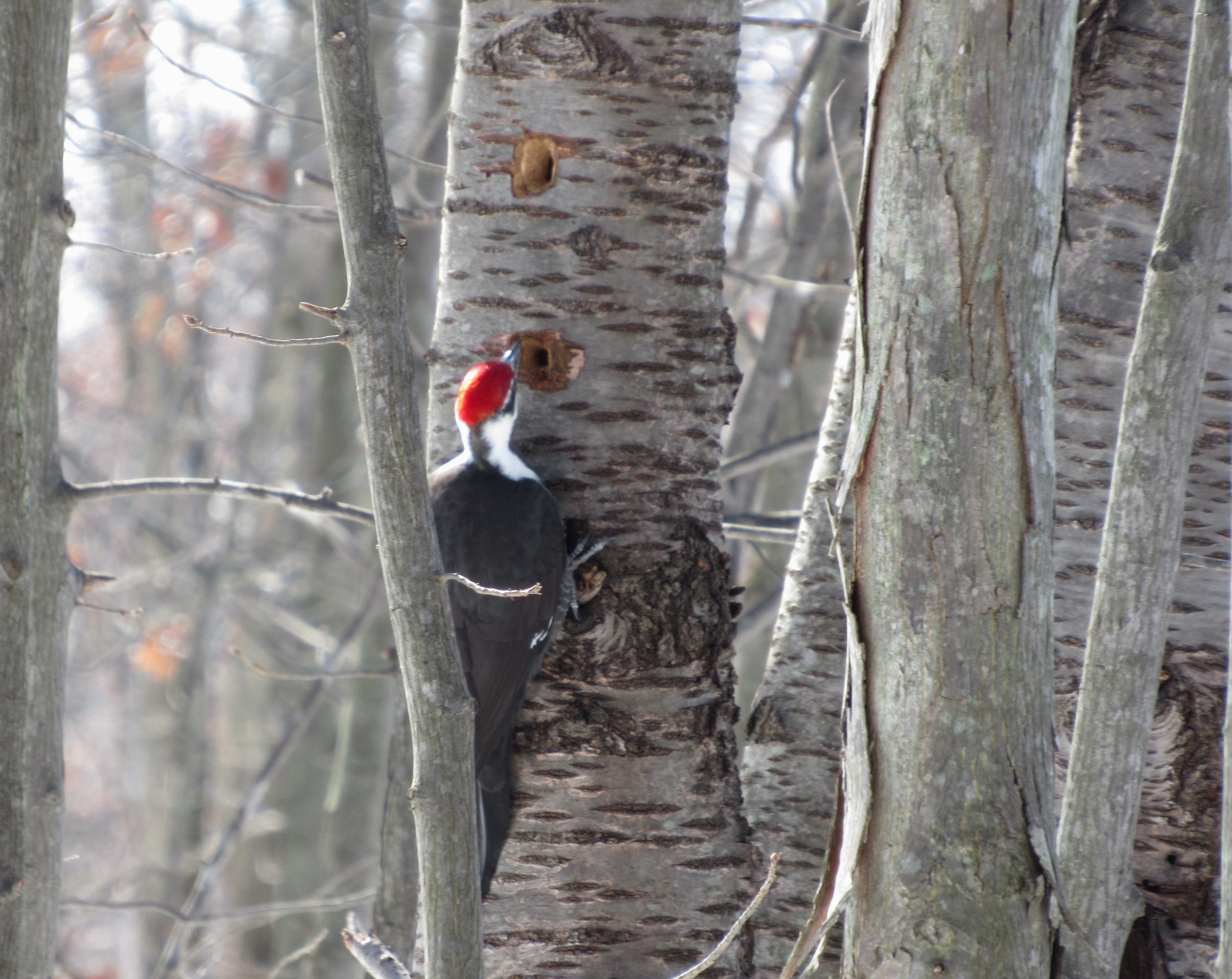 Virtually all seed-eating birds can crack those “oilers” open easily and the kernels within have a high fat content, making them extremely valuable for most winter birds. It did not take long for the word to spread and a few hours later, the feeders were a flurry of feathered activity with several birds devouring the seeds and pecking at suet. Red-bellied woodpeckers, Black-capped chickadees, American Goldfinch, Downy Woodpeckers, House Finches, Cardinals, Blue Jays, Eastern Bluebirds, Tufted Titmice, Dark-eyed Juncos and White-breasted Nuthatches all joined in the feast as others gathered in adjacent sun-soaked shrubs.

Ruffed grouse live in wilder parts of Oakland County that have a mix of cedar swamps and second growth trees. They thrive in winters with heavy snows and frigid temperatures. One could say they love fresh powdery snow, especially when temperatures plummet. The ruffed grouse is famous for its winter roosting behavior, commonly referred to as “snow roosting.” Grouse will dive bomb head first into the fluffy snow, creating an instant shelter that keeps out the cold and protects it from winds and that’s where it sleeps all night. I’ve yet to witness that well-documented act, or photograph a grouse in winter since they explode into flight when startled, but I have captured photos in spring when they strut about and “drum” in cedar swamps to attract mates. It’s safe to say that as I write these words, some of the grouse in our county are hunkered down in their secret snow igloos beneath the surface.

I dug out my winter boots and headed off into the woods behind my house on the afternoon of November 12th, just as the sky turned blue and the temperature started its slow decrease. It was a winter wonderland, perhaps an appetizer of what is to come. It was obvious that for the creatures of the wild, unlike many humans, the sudden snowstorm was no big deal. A few squirrels scolded my woodland intrusion, rabbit tracks led to a thicket not 20 feet away from fresh coyote tracks, and a lone goldfinch sat on a branch by my frozen swamp, its feathers fluffed against the cold, but also well positioned to capture the warmth of the sun. I wanted to tell it to fly up to my house and visit the bird feeder.

I noticed slight movement to my side as the goldfinch and I watched each other and turned slowly until I was facing a deer that has come to know my wanderings. The deer was about a hundred feet away nibbling on twigs. It looked about, saw me, and continued its brunch. The sudden snowstorm and frigid temperatures may have created discomfort and anxiety for humans, but for the deer, it was just another day in the woods and I was just a quiet guy that meanders in his woods. A deer’s winter coat has an outer layer of hollow hairs that trap air and act as insulation. Deer also conserve energy on cold days, a fact easily observed by shared pathways when snow is deep. That reduces energy expenditures as they travel to areas to bed down or browse.

The snow will melt and autumn will return, at least for awhile, but when winter resumes it’s good to remember that the adaptations and survival strategies of wild species have been tested and fine-tuned for thousands of years. The early November snow and frigid temperatures may have been a newsworthy event that caused anxiety for humans, but for wildlife it was just a passing moment in time, for that is the way of nature on the wilder side of Oakland County.