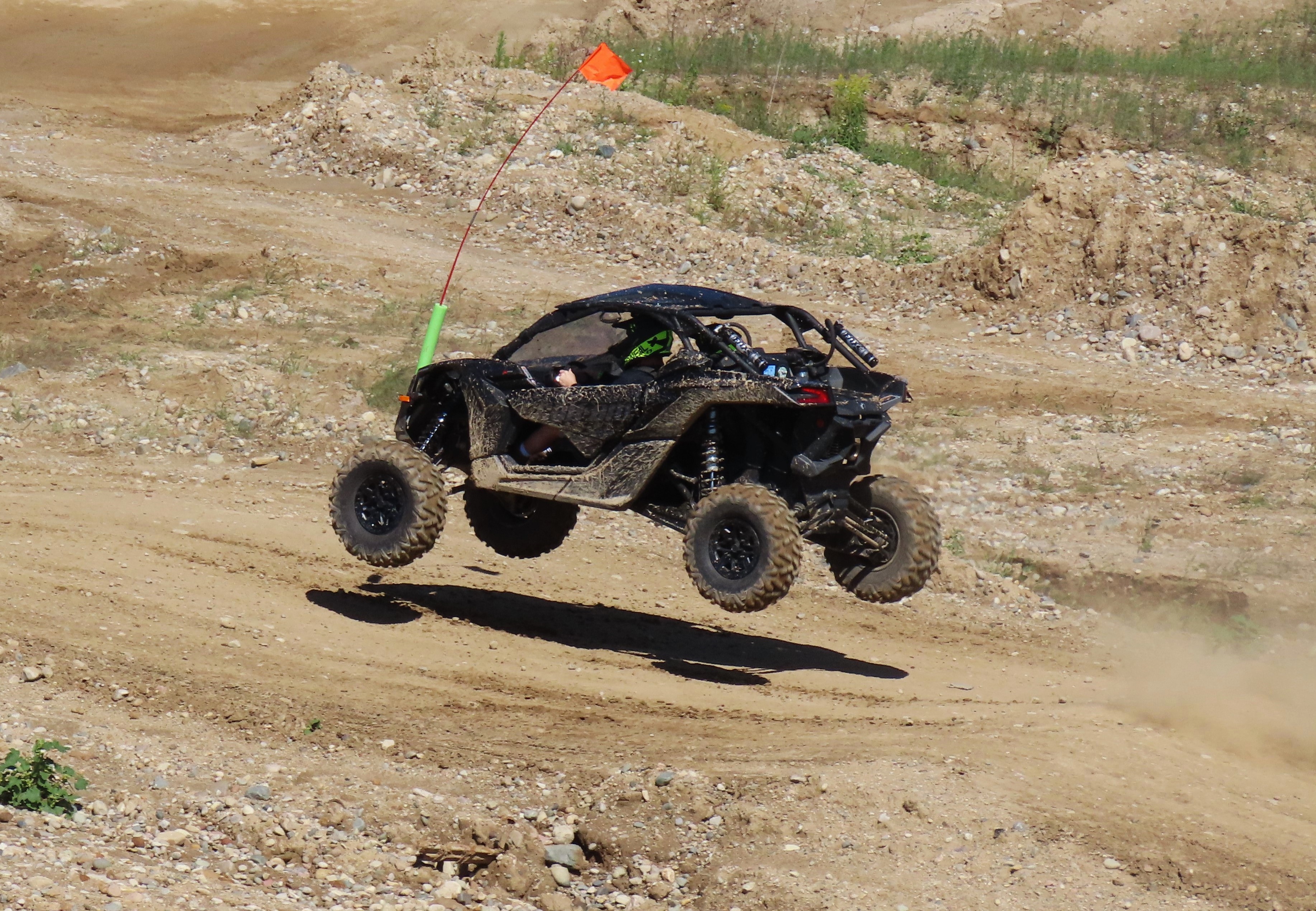 The Michigan Department of Natural Resources (MDNR) was tasked many years ago with developing an opportunity for off-road vehicle recreation in southeast Michigan, a venture that would also reduce illegal and dangerous riding on utility corridors and railway beds, as well as in parks and on private lands. Oakland County had depleted sand and gravel mines that were unlikely to ever be redeveloped for residential or commercial use because of noise from I-75 and challenging topography. It was a marriage that was meant to be and after years of labor pains, the result will soon emerge as Holly Oaks ORV Park, the first ORV Park in Oakland County.  It will be the second state park in Michigan to be jointly managed by the state and a county parks agency. 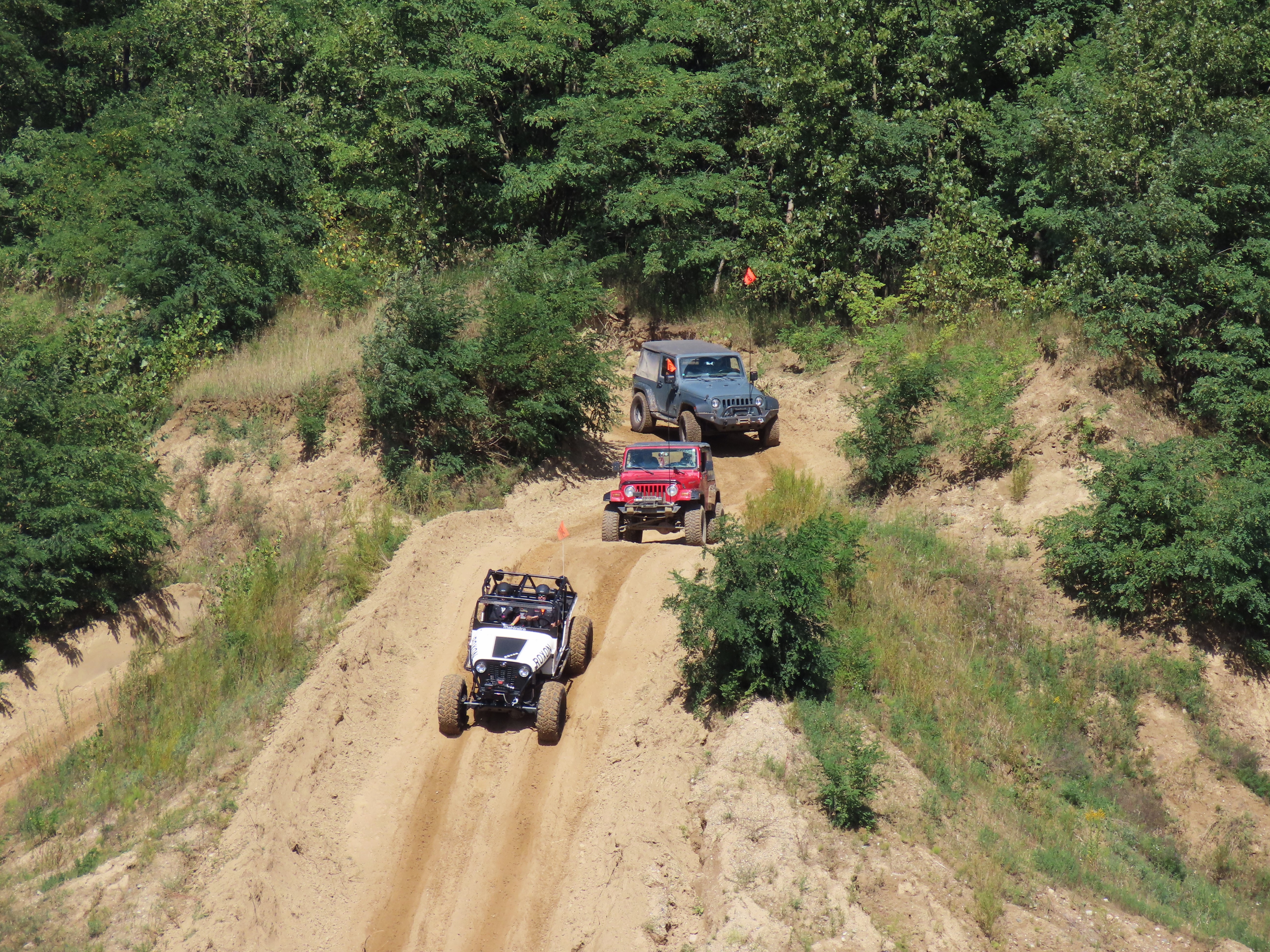 “This park has been a long time in the making,” Oakland County Parks and Recreation (OCPR) Executive Officer Dan Stencil said. “We’ve been talking with the MDNR about this for 20+ years and working hard on this particular property for the past seven. The stars finally aligned, and we have a location with easy access, very few neighbors and the property is surrounded by recreation land.” 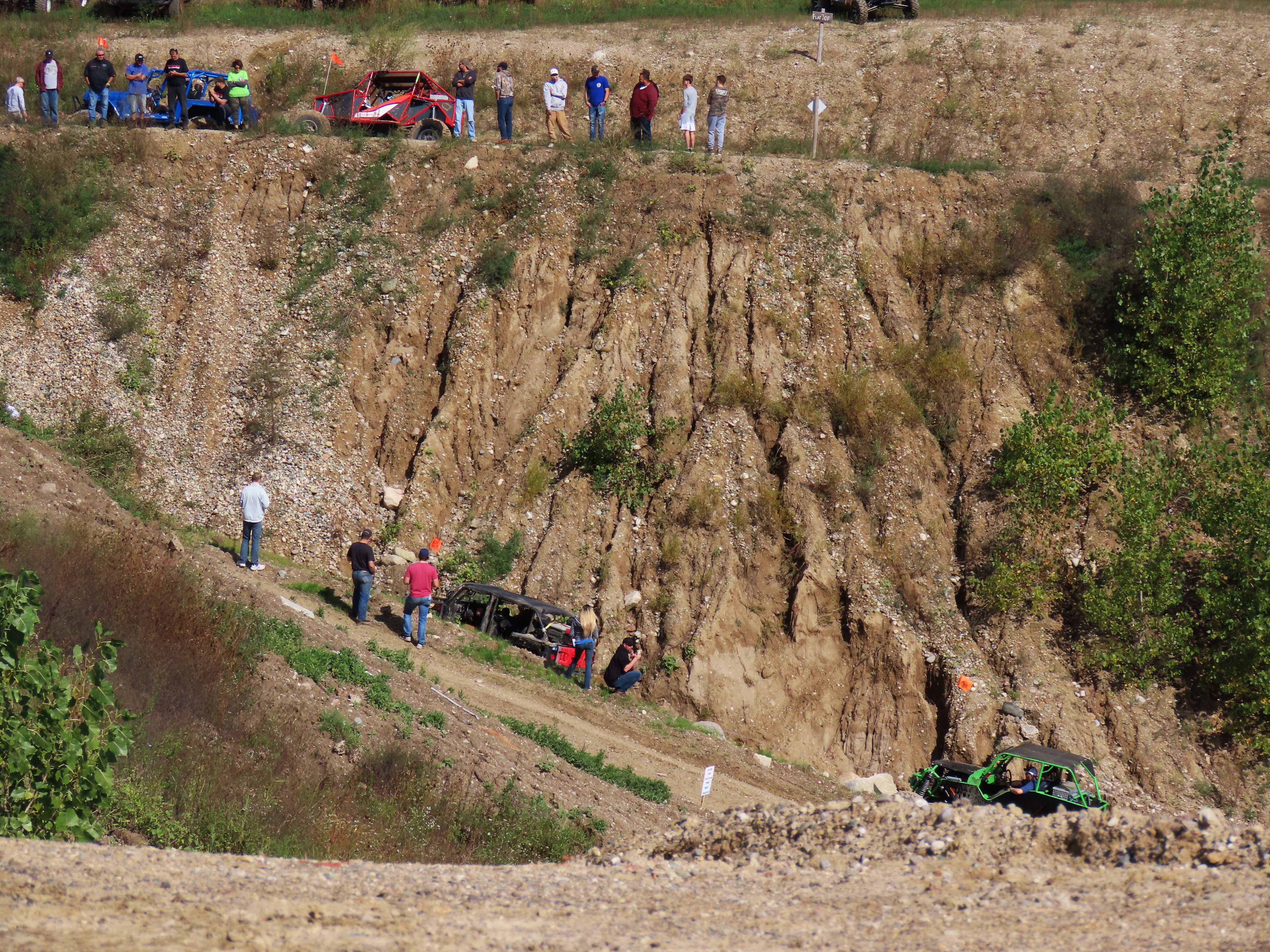 I’ve known Stencil for many years. His statements are accurate, but he missed something in that April 2019 news release. OCPR may have been talking about the concept for 20 years and working hard on the site for the past seven, but the real groundbreaking for the new Holly Oaks ORV Park had nothing to do with county or state government and does not match his time frame. In reality, the ORV Park had its dramatic start about 1.8 million years ago as continental glaciers buried Michigan under land crushing layers of ice that would have dwarfed the height of the Renaissance Center. And then, about 12,000 years ago, as the last of those great glaciers melted, enormous amounts of sand and gravel were deposited in the retreating glacier’s path, especially in northwestern Oakland County. That, my friends, is how the park site construction actually began.

The interlobate landscapes of Oakland County have some of the largest gravel mining operations in the world. For those not familiar with glacial terminology, the interlobate landscape is where two major lobes of ice once came together before they melted. These hilly areas are very common in much of Oakland County and have numerous swamps, kettle lakes, ponds and an incredible abundance of gravel and sand deposited by retreating glaciers. One of those sites that has been heavily mined is in Groveland Township, adjacent to the southern slopes of Mt Holly and immediately east of I-75. That location is now going through the final process of being repurposed as our first ORV Park. 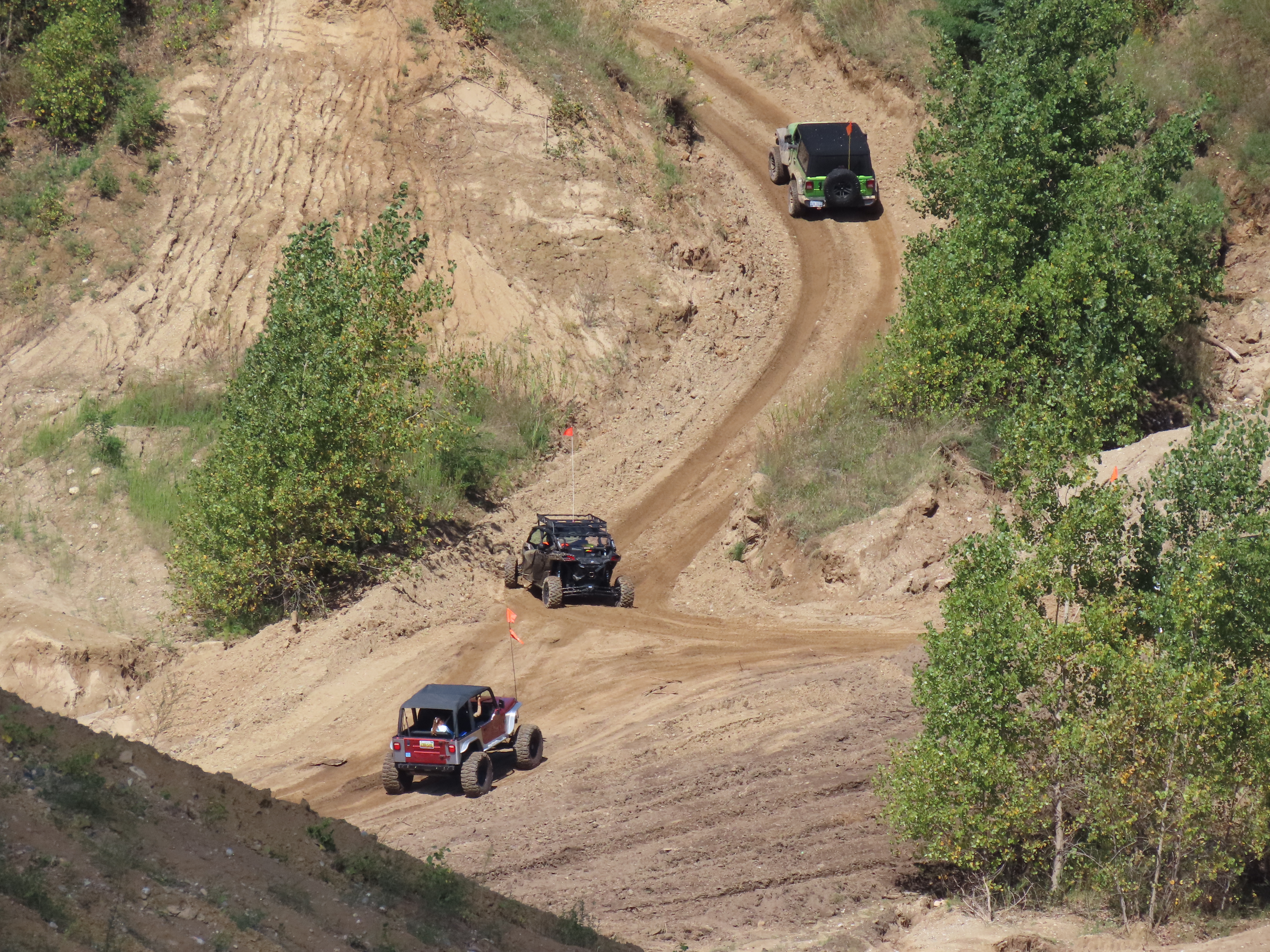 Fast forward from that final glacial melt to 9 a.m. on September, 14th, 2019. I arrived at the site of the future Holly Oaks ORV Park an hour before the Detroit4Fest Offroad Festival began, not so much as to see the wide range of ORVs that would soon arrive, or those on display, but instead to search out the glacial footprint left by the retreat of the glaciers and the mining of gravel. I did not have to look long. The special event’s welcome sign was ringed by glacial erratics (boulders transported by glaciers) and a boulder larger than a monster truck tire was next to the VIP tent.

After a few hours at my “media perch” VIP viewing point I was invited to ride the course in a “Roxor” with Rob Mason, a representative of Mahindra, the company that manufactures the Roxor in Auburn Hills. Not being ORV wise, I had no idea what a Roxor was and it was explained to me roughly like this, “The Mahindra Roxor is the modern day incarnation of the original civilian Jeep, the Willys CJ-2A, that was the descendant of its famed WW2 military ancestor.” I nodded. I’ll make a confession: I’ve never owned an ORV and with my preferred method of off-road traveling being boots on the ground, I don’t have much knowledge about them. Even so, Mason’s team graciously outfitted with me a helmet, strapped me in and we were off.

If I was limited to one word to describe my dust kicking, hill climbing and at times stomach churning experience I would say, “Wow!” Our cruise was about three miles long and gave me superb views of the southern slopes of adjacent Mt Holly Ski and Snowboard Resort, eroding cliffs from heavy rains and the power of gravity and a whole lot of happy faces as we came close to other ORVs of every make and model, as well as more traditional Jeeps.

My personal tour also presented me with the perfect opportunity to photograph more evidence of our county’s often hidden glacial history of advancing and retreating glaciers and document layers of sand, gravel and boulders in sections of the former gravel operation.

If someone would ask me if I thought this was a perfect land use for a former gravel mining operation in Oakland County, my answer, without hesitation, would be a resounding “Yes!” and include kudos to the Michigan Department of Natural Resources and Oakland County Parks and Recreation for making this happen. The grand opening will occur in July of 2020 and will be quite the day on the wilder side of Oakland County. Until then, here are some published answers from Oakland County Parks and Recreation news releases to some frequently asked questions about the ORV park and an explanation of why Oakland County created the park in cooperation with the Michigan DNR, which included a $2.9 million dollar grant from the Michigan Natural Resources Trust Fund and a $262,000 grant from the DNR ORV Trail Fund that is anticipated for park development in 2020.

“The park will be funded through a daily entry fee (approximately $15 -$25 per vehicle of person) Park users will also need to acquire a DNR ORV license and trail permit to utilize the park. There will be no requirements for a DNR Recreation Passport or an Oakland County Parks and Recreation Annual Vehicle Permit. The park will also generate revenue from sponsorships and special events (public and private) and corporate use for filming and testing.”

“The site, adjacent to Groveland Oaks County Park, was a perfect complement to both the adjacent freeway and Dixie Highway, as well as the large swaths of nearby state land reserved for camping, fishing, hunting and non-motorized use (Holly State Recreation Area).”

“The park will utilize parking, a sales area and restrooms at Mt Holly Ski and Snowboard Resort. Access to the ORV Park will take place from the Mt. Holly parking lot. Winter access will be off Shields Road.”