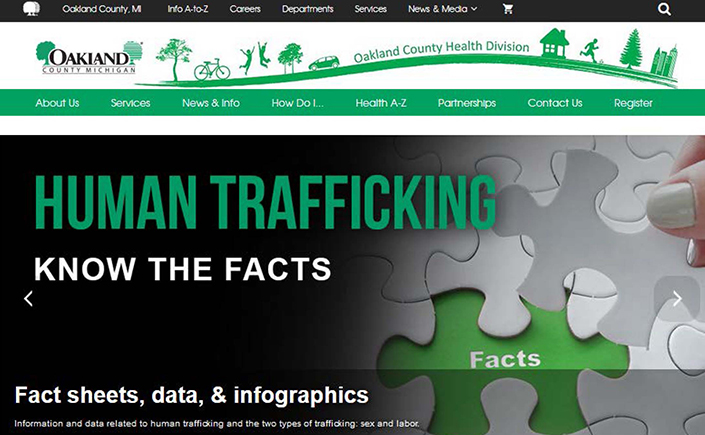 On January 11th, National Human Trafficking Awareness Day, the Oakland County Board of Commissioners, in partnership with the Oakland County Health Division and Sheriff’s Office, held a press conference to address the issue of human trafficking. Also joining the commissioners were members of the public, community partners, law enforcement, and elected officials who are committed to promoting education and awareness about trafficking in Oakland County. Board Vice Chairman Michael Spisz opened the press conference with the announcement of the launch of a new website, a collaborative effort on behalf of the Oakland County Human Trafficking Task Force and its partners. The website, www.oakgov.com/humantrafficking, is intended to be a primary source of information about human trafficking for the region. It provides information and support for victims, parents, advocates, professionals, and anyone interested in learning more about the issue and how to help.

Oakland County Health and Human Services Director Kathy Forzley explained that human trafficking is a diverse and complex issue that affects 26 million victims worldwide, including men, women, and children. Forzley shared that the website, while attempting to be comprehensive with fact pages, a federal strategic action plan, and national hotline numbers, is still in its infancy. It’s intended to grow rapidly and expand to become a one stop shop for information and resources to assist victims, individuals, parents, or professionals in a coordinated community-wide and multi-disciplined response to human trafficking. 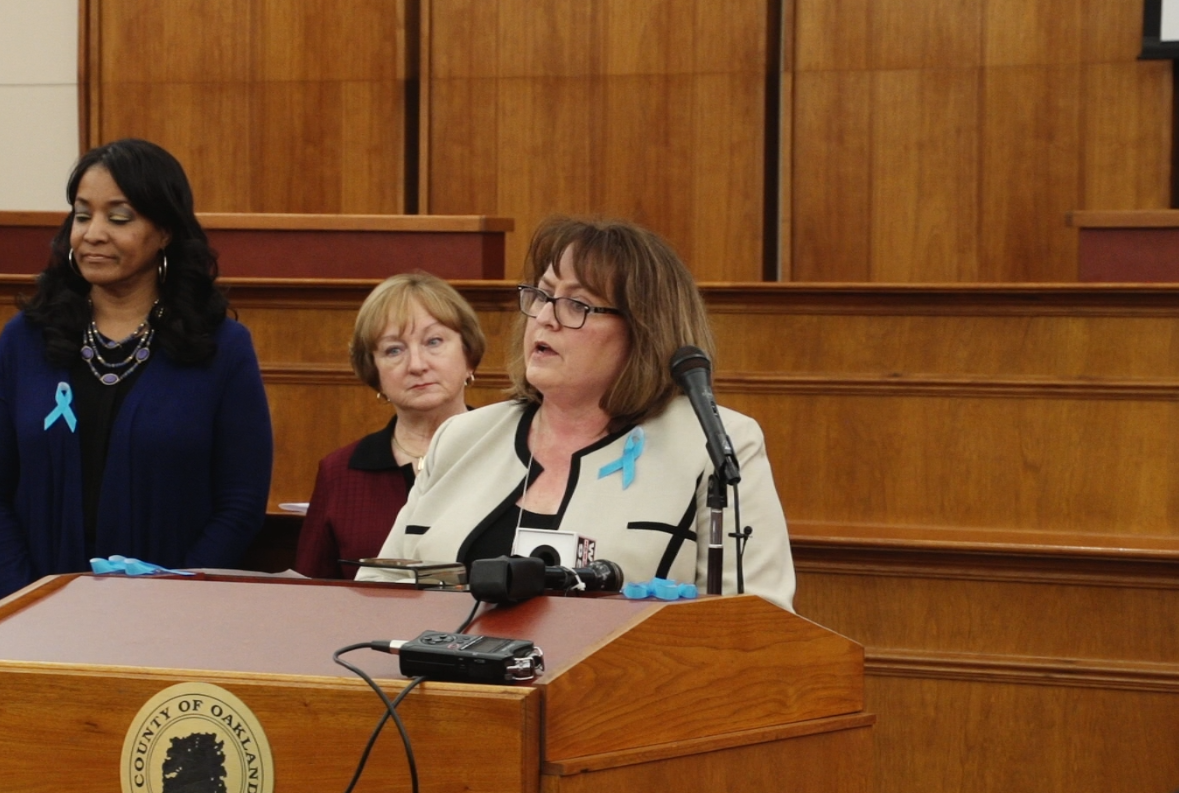 Commissioner Janet Jackson shared that she has been personally involved with addressing this serious problem since 2013. Jackson has coordinated annual countywide hotel outreach and awareness activities, partnering with SOAP (Saving our Adolescents from Prostitution) Metro Detroit. SOAP Metro Detroit is an anti-human trafficking and outreach hotel program that was created in response to FBI human trafficking sweeps in 2013. 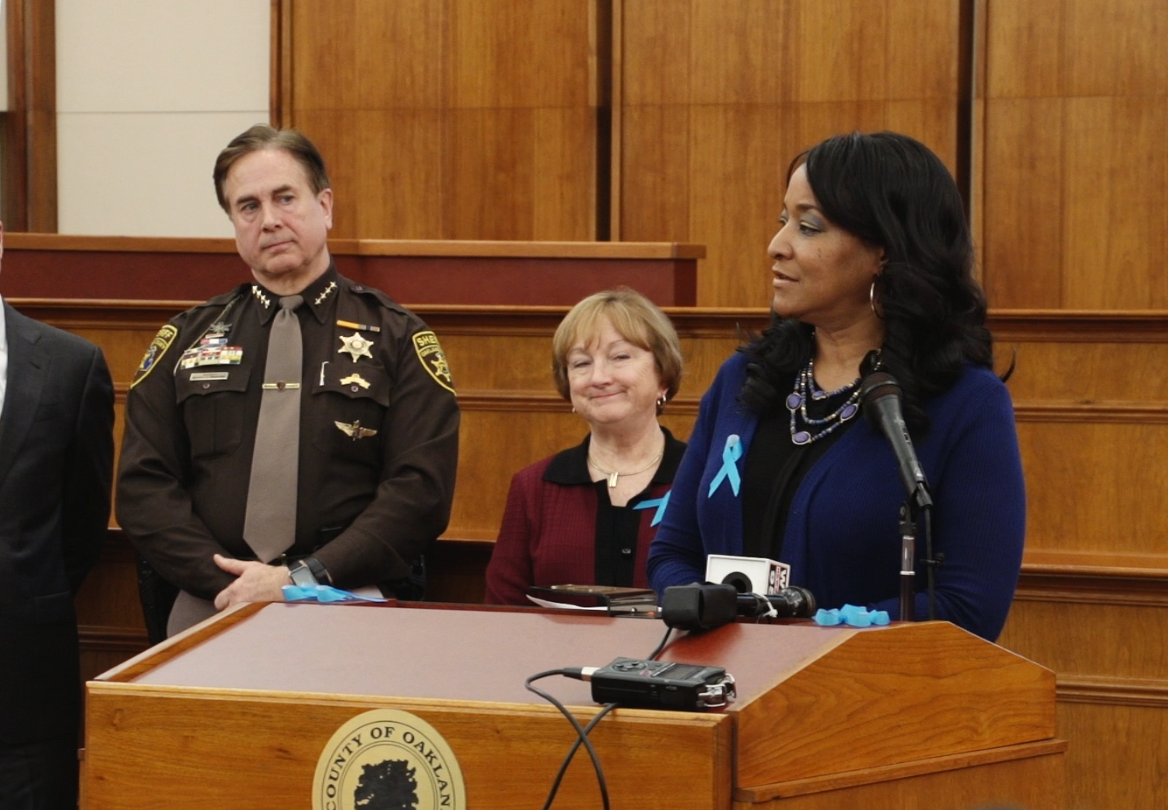 Oakland County Sheriff Michael J. Bouchard addressed the audience and emphasized that attacking this kind of insidious crime takes teamwork. While law enforcement plays an important role, the public also needs to be educated to recognize the signs and symptoms and to be aware that this can happen in any community. Bouchard shared, “Michigan is #8 for human trafficking in the country by most reports and that’s not a top ten list we want to be on.”

Sheriff Bouchard gave tips on what to watch out for regarding potential victims: 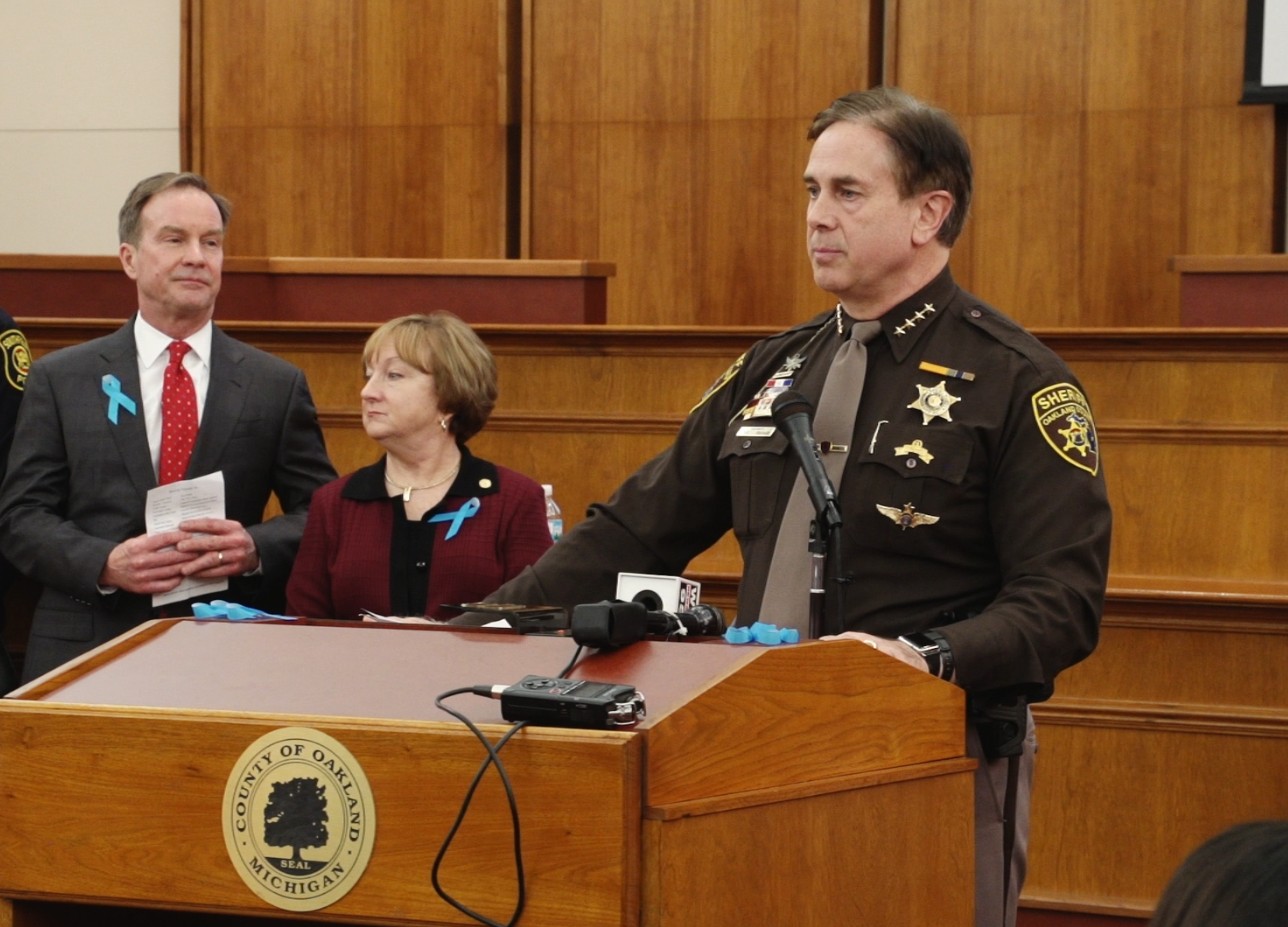 Southfield Chief of Police Eric Hawkins shared the impact that human trafficking has had on local police departments and their operations from the ground level stating, “When human tracking occurs in our local municipalities, there will be a corresponding increase in major crimes, social disorder, and quality of life complaints.” Hawkins added that it also forces officers to redirect valuable and scarce resources. When a human trafficking crime is suspected or reported, officers must alter their focus to investigate that crime, and, as a result, are taken away from important community policing and youth outreach programs. 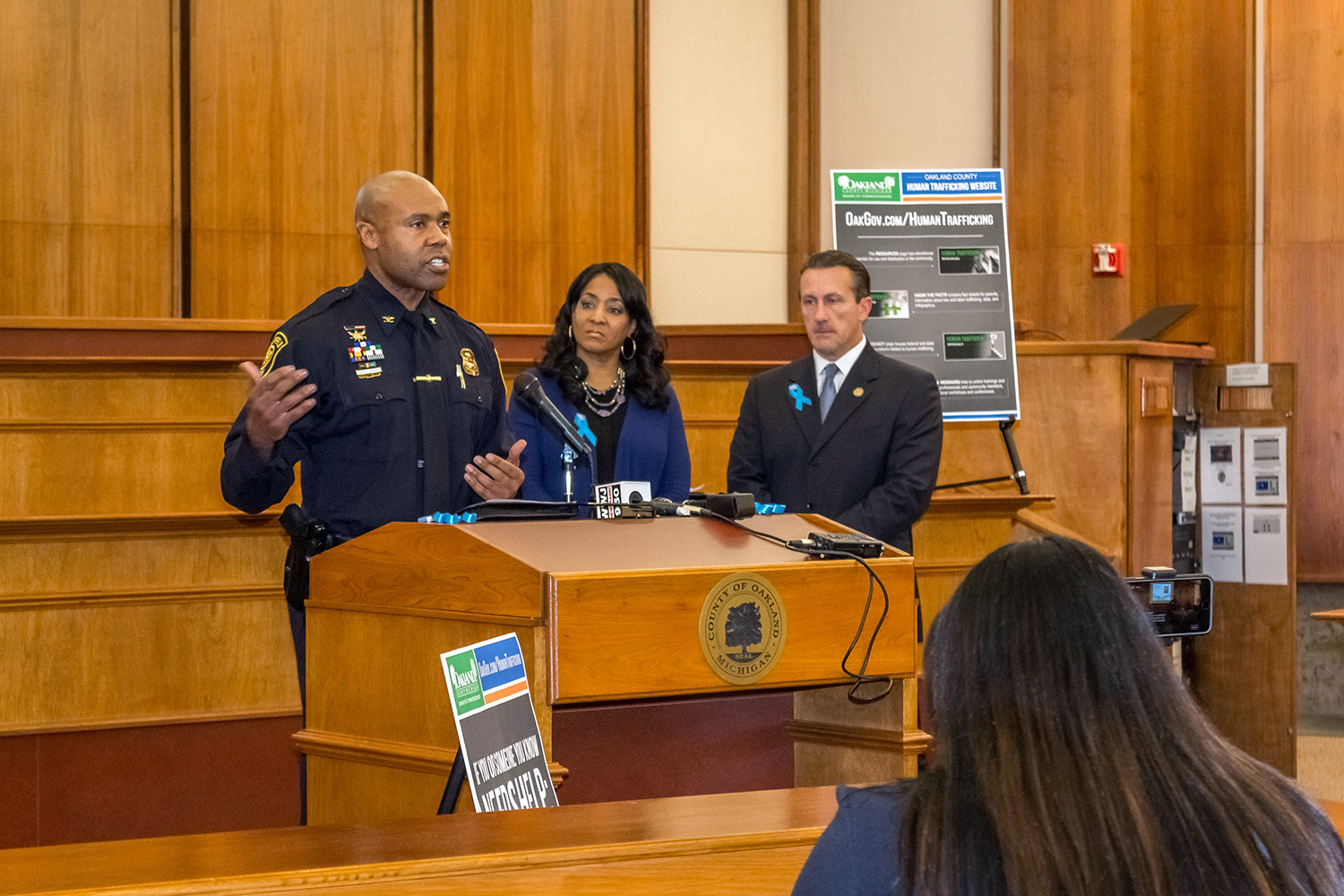 Commissioner Eileen Kowall shared that she is honored to serve on the Oakland County Human Trafficking Task Force, and pointed out that it creates an important link to the Michigan Human Trafficking Commission, which has two goals: 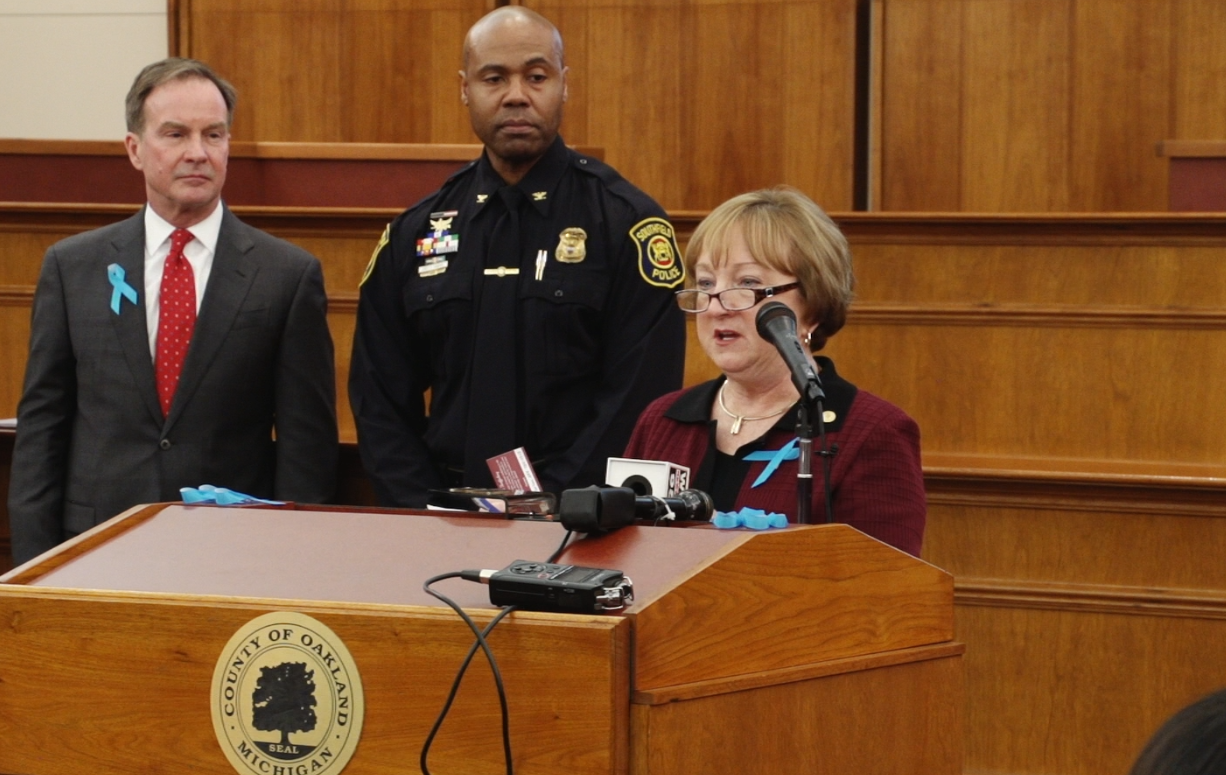 Attorney General Schuette thanked the previous speakers, the public, judges, law enforcement, and elected officials for being there and for their partnership. He explained that when he first had the privilege of serving as Attorney General, he formed a bipartisan commission to focus on public awareness, training, data, and tougher penalties. He emphasized the importance of understanding that, men, women, and children who are trafficked are victims, not criminals. 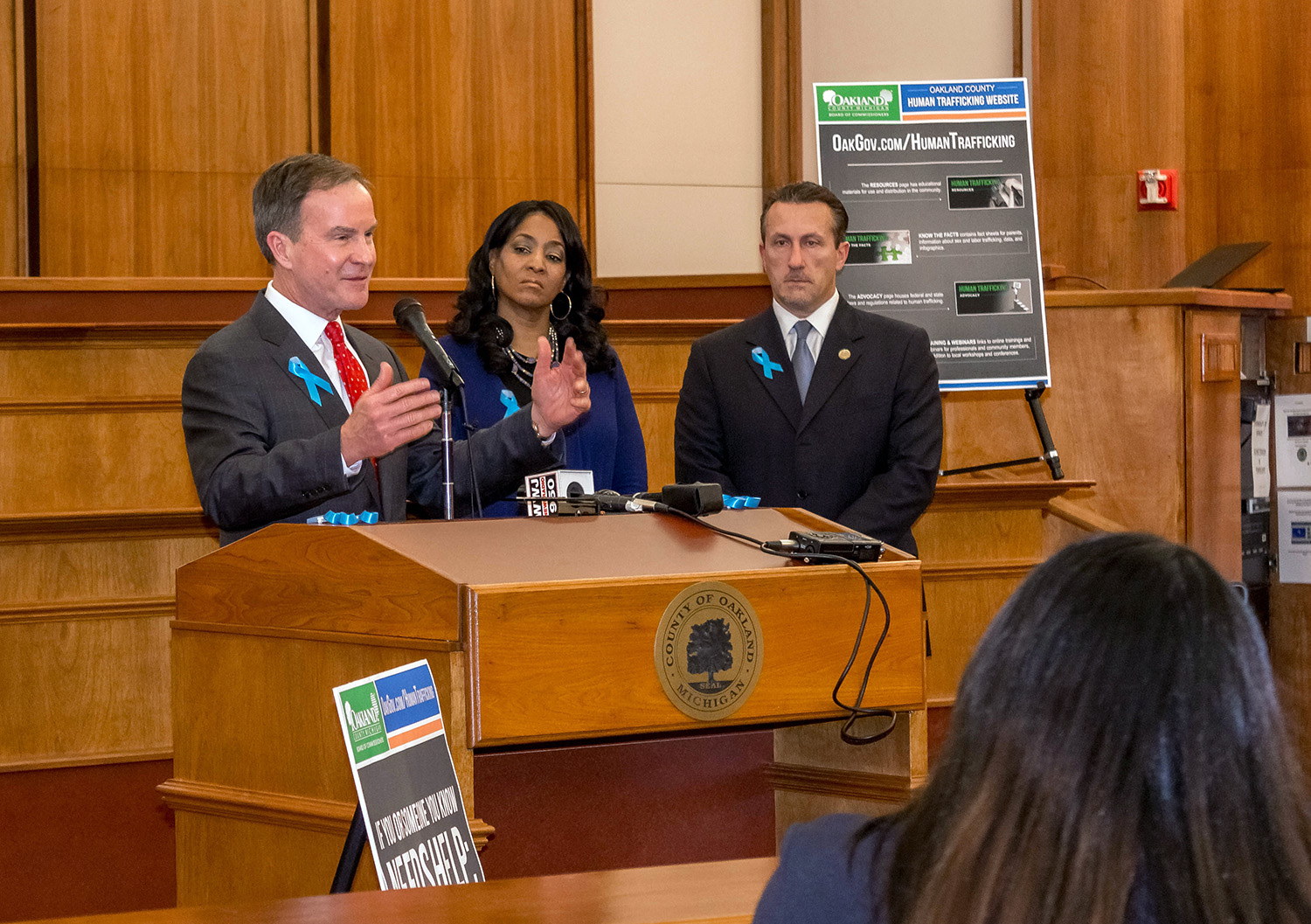 Commissioner Spisz ended the press conference by thanking individuals and organizations for their support and their continued efforts to fight human trafficking, with special thanks directed toward the Oakland County Executive Office, elected officials, representatives from the FBI, Homeland Security, Michigan State Police, local law enforcement, Oakland County Prosecutor Jessica Cooper, and the Oakland County Human Trafficking Task Force. He encouraged the audience members to visit the new website and spread awareness by sharing Oakland County’s social media posts. He also reminded attendees to continue to wear the blue ribbons that were given out in support of Human Trafficking Awareness Month throughout the month of January. 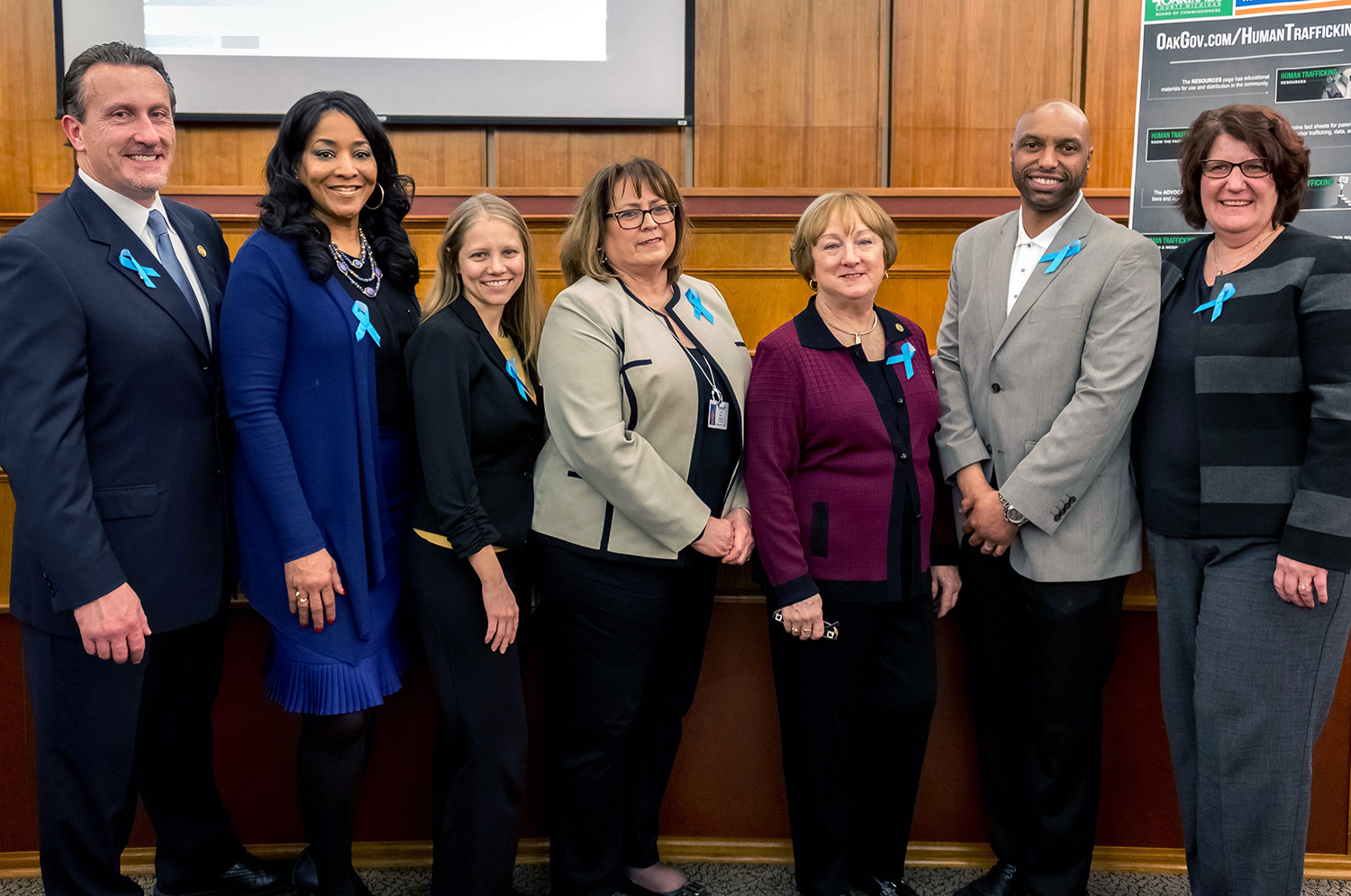 Visit the Oakland County Board of Commissioners for current initiatives and upcoming events online. For more information about their Human Trafficking Task Force, visit their webpage.