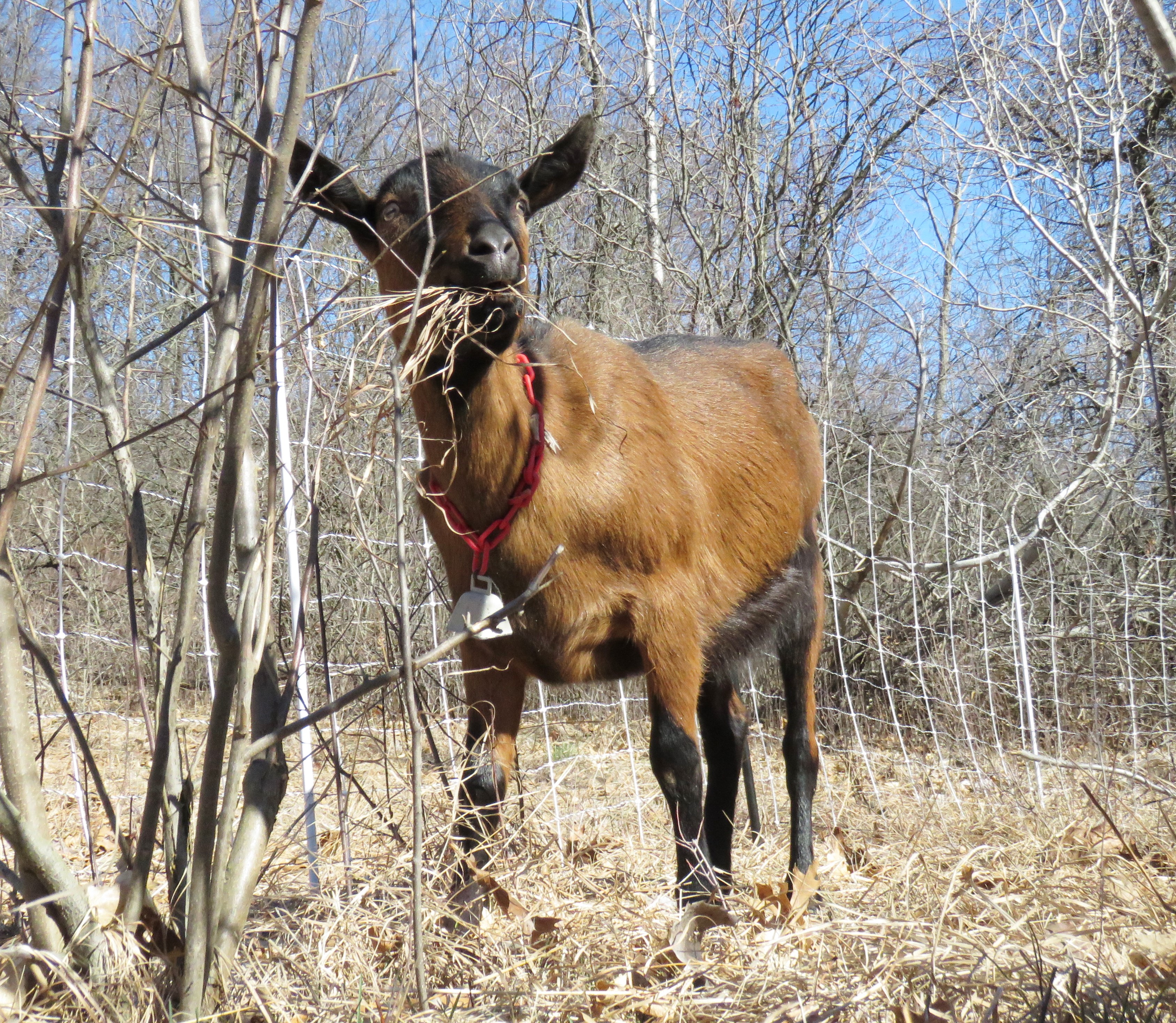 The non-motorized Polly Ann Trail is a vital and increasingly popular segment of the growing network of trails and greenways in Southeast Michigan that enhance the quality of life, provide healthful outdoor recreation opportunities, and serve as windows to the world of nature. The easily accessible 14.2 mile long Oakland County section of the Polly Ann Trail begins in Orion Township and meanders north through the Village of Oxford, Addison Township, and the Village of Leonard. Woodlands, trailside wetlands, and farmlands dominate the Wilder Side of Oakland County trail landscape as it nears the Lapeer County line. On any spring day, hikers, joggers, walkers, and cyclists will hear the territorial songs of birds and courting frogs, and may see sunning turtles, soaring hawks and an abundance of small mammals and the occasional deer. 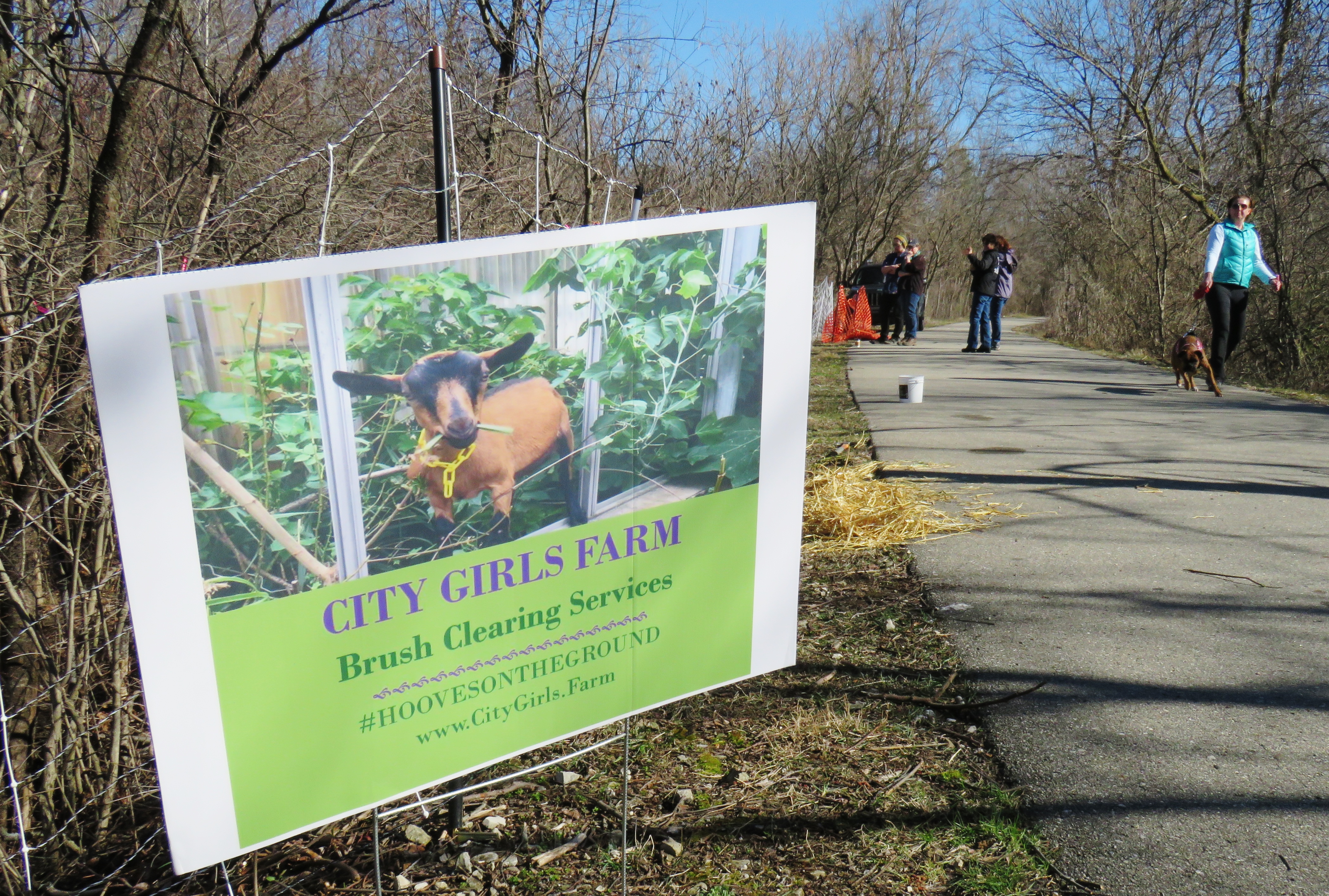 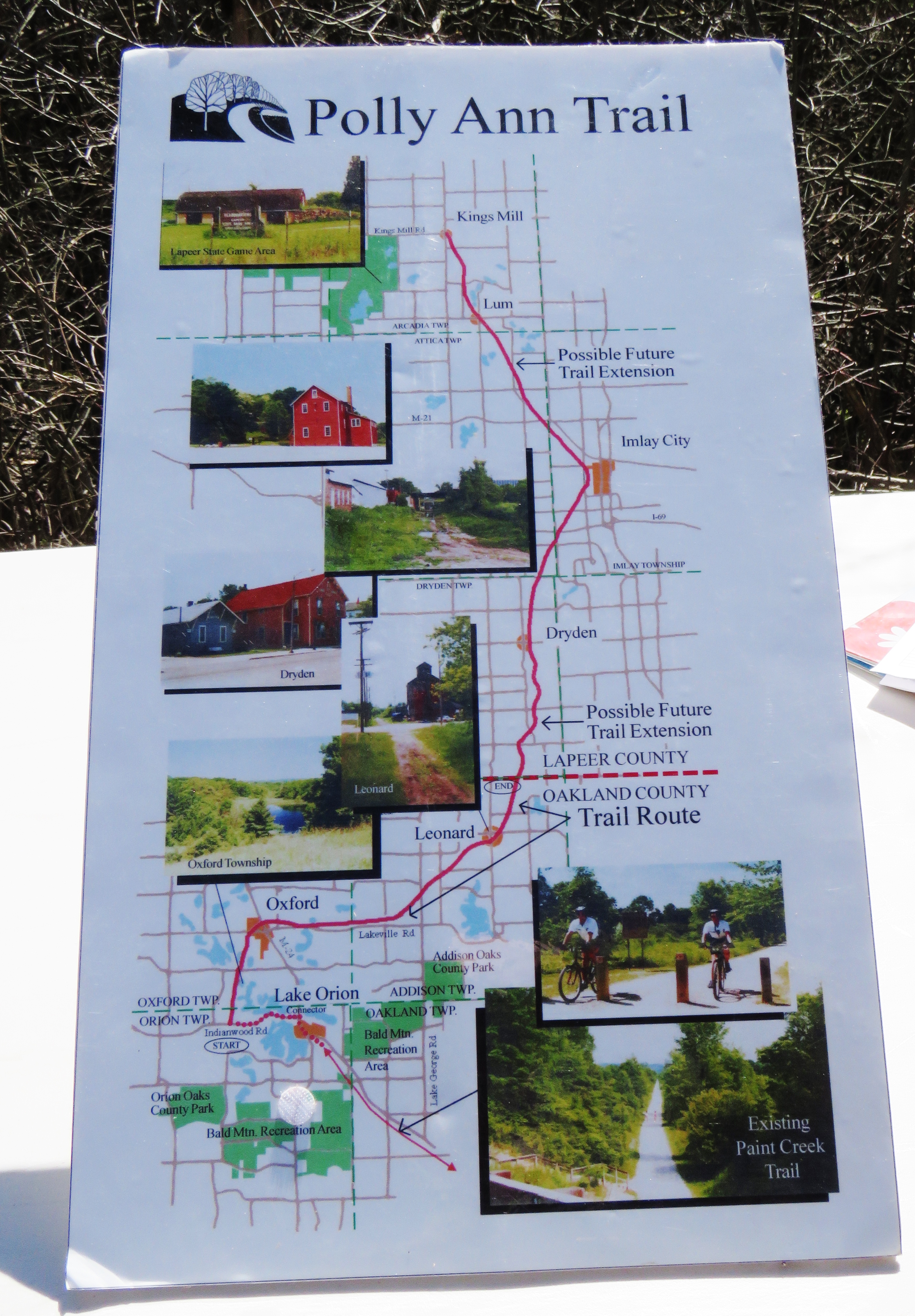 Goats are not usually encountered but April 8th, National Opening of Trails Day, was not a usual kind of day for trail users. Twelve goats grazed along the Polly Ann Trail just a bit south of the Burdick Street trail crossing in the Village of Oxford. The goats had not escaped, they were hired from City Girls Farm in Pontiac by the Polly Ann Trailway Management Council. Their work assignment: Eat invasive species. Buckthorn, oriental bittersweet, garlic mustard and phragmites are all lip-smacking delights for goats and the Polly Ann Trail offers a smorgasbord of their favorites. Poison ivy leaves and the ivy vines are also a tasty treat for the goats. On “Day One” of the project, buckthorn seemed to be a favorite food and witnessing goats eat that thorny shrub was like watching the enthusiasm of little kids let loose in a candy store after they were told to eat all they want. 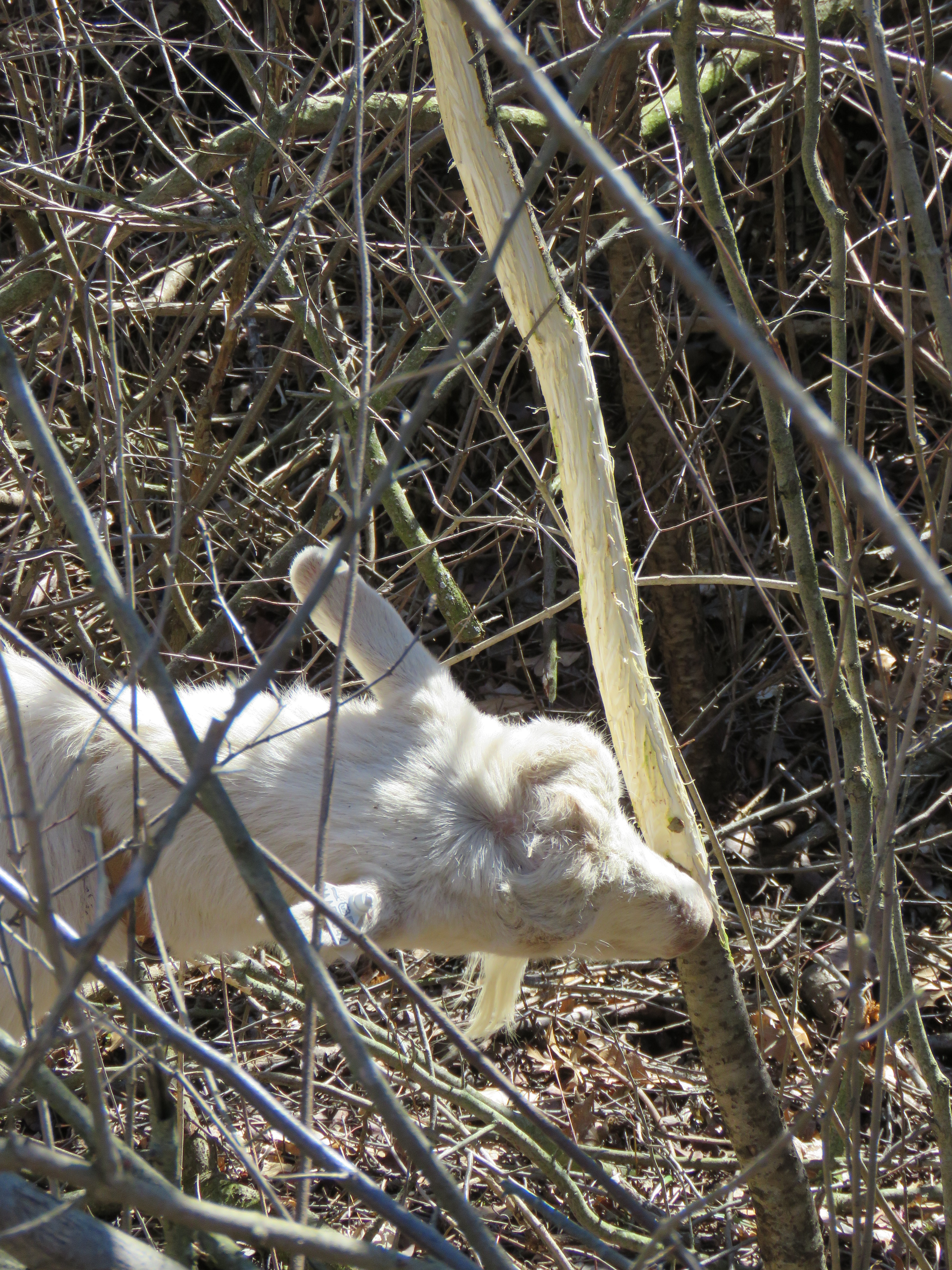 When it comes to clearing unwanted vegetation, goats provide an ideal alternative to herbicides and machines. Chemicals contaminate soil and are not very effective in stopping new seeds from sprouting. One of the reasons goats are so effective in controlling invasive species and unwanted vegetation is plant seeds rarely survive the grinding motion of goat mouths and the journey through their multi-chambered stomach and digestive system, making germination of consumed seeds nearly impossible. 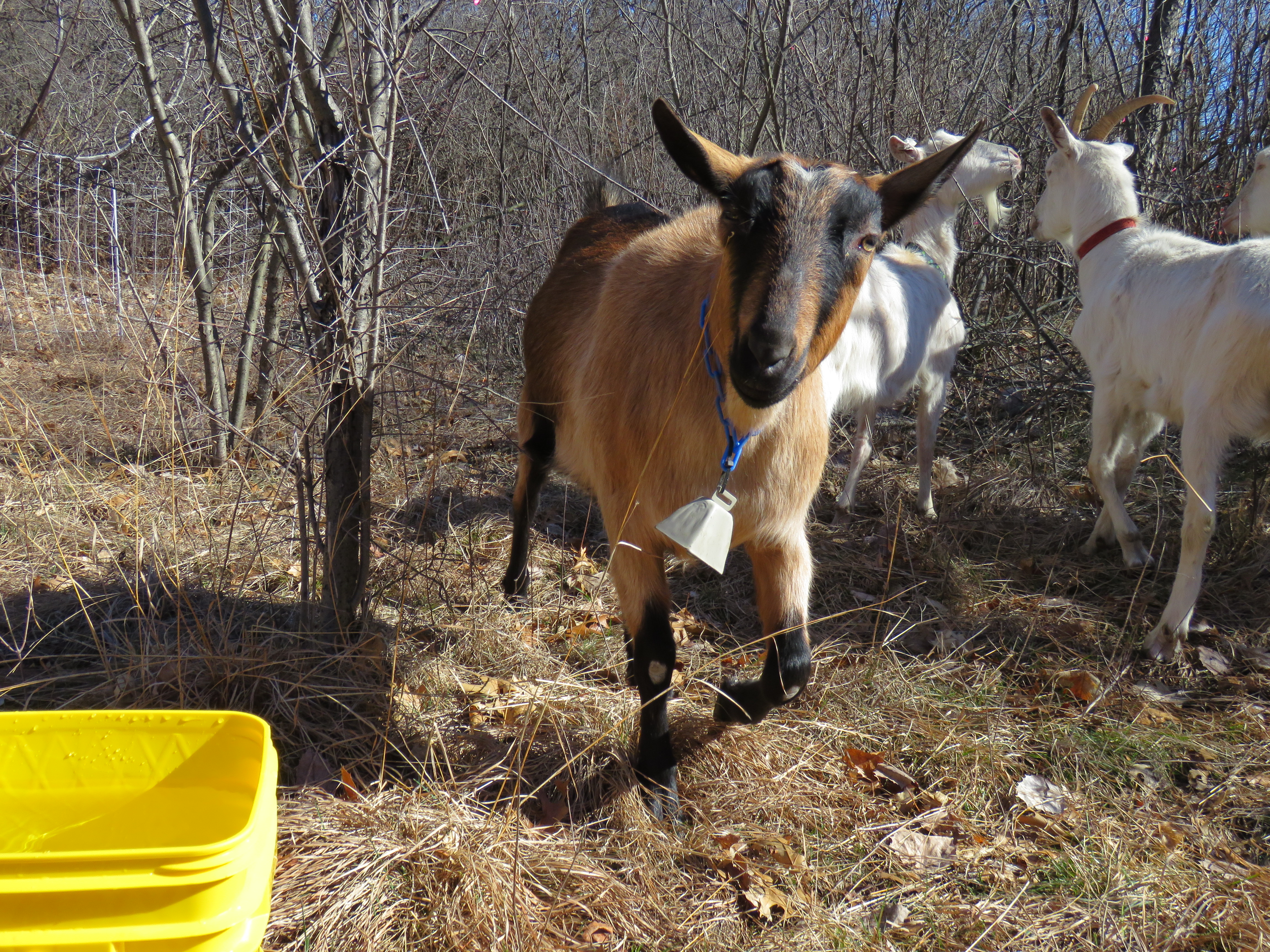 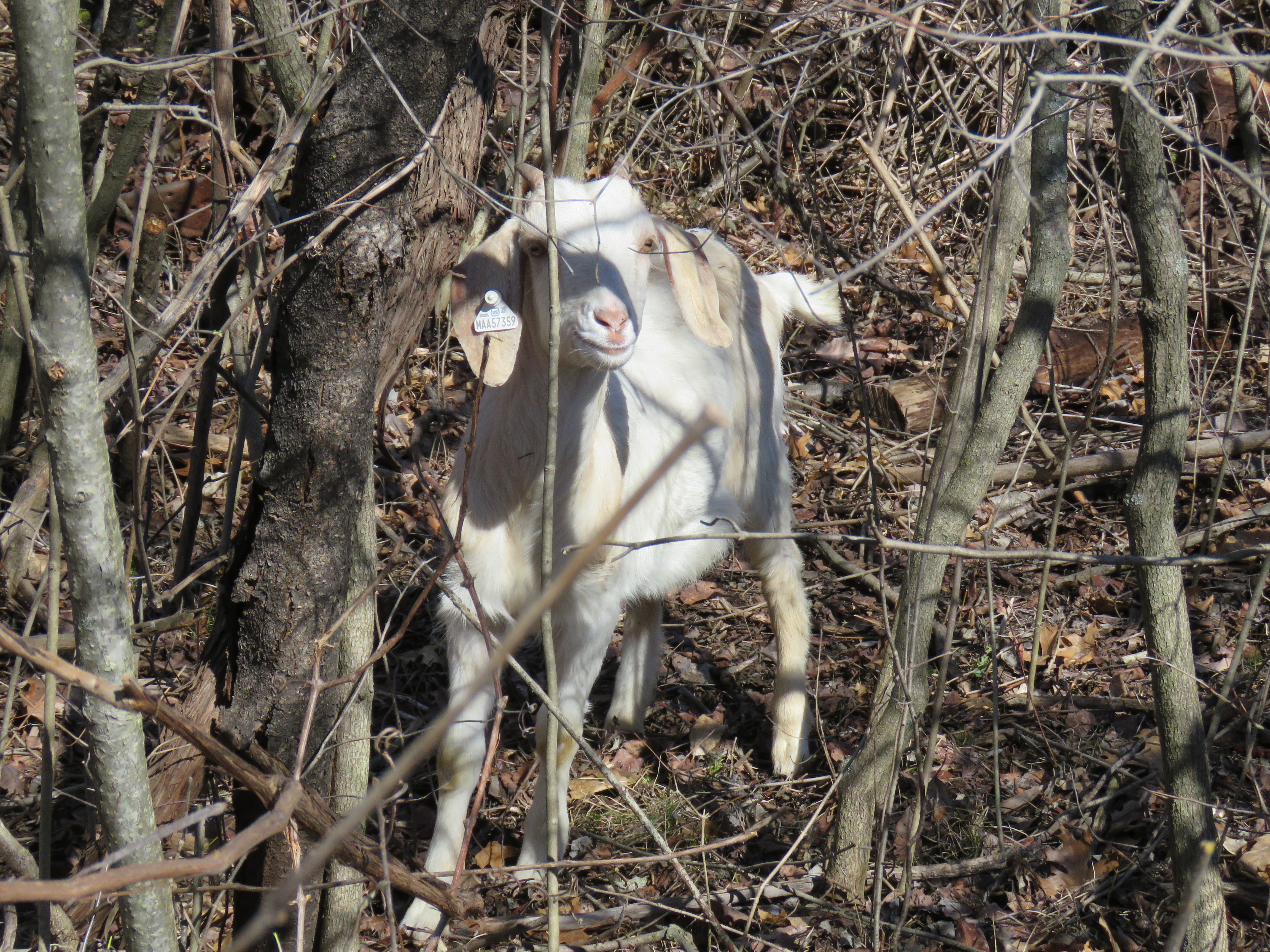 Weed cutting machines often disturb the soil in such a way that it becomes more conducive to increased seed germination. Goats are a simple, biological solution – and they were crowd – stoppers. Amy McIntire, owner of City Girls Farm was on scene and explained, “Conservation grazing is actually a practice used for hundreds of years. Back then it was just called farming, but with livestock grazing in a controlled rotational pattern invasive species could not catch hold and native plants continued to thrive.” She went on to emphasize City Girls Farm implemented the practice in Oakland County with 21st century tools including solar-powered portable electric fencing, a repurposed mobile barn, and most importantly communities and agencies that care about the environment and what happens to their land.

I stayed with the goats for four hours as they methodically munched and chewed their way through their 150-foot by 25-foot portable enclosure, pausing only to meander up to the trail’s edge to watch passing humans and curious dogs. Unlike machinery that would have had great difficulty working on the sloped side next to the paved trail, the sure-footed Alpine and Oberhasli goats were naturals and worked easily among the shrubs and trees to the delight of trail users. Linda Moran, the Polly Ann Trail manager was kept busy chatting with trail users that stopped to view the unusual scene, and that was almost all of them. “My job includes more than just care of the trail, I am also charged with getting people out and using the trail. As wonderful as the goats are for removing invasive species, they also help start lively conversations and make people more aware of what is going on in their communities,” Moran said. As the goats sunk their teeth into more buckthorn, she passed out cookies to trail users and knelt to talk to young children who were excited to see “real live goats” and hear their cow bells ring. 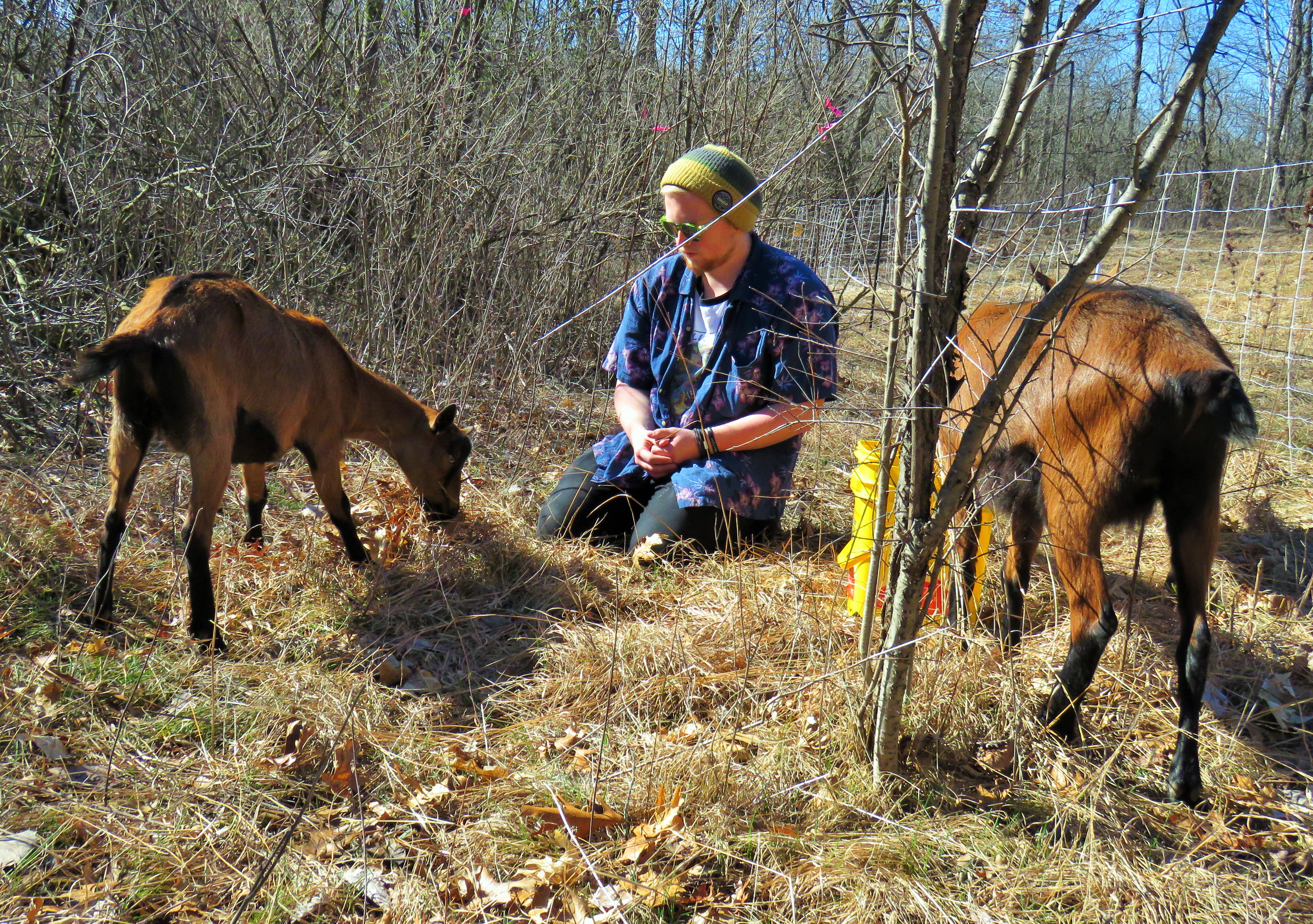 Moran explained that “goatscaping”, now more formally known as conservation grazing, is a much safer practice than using potentially dangerous herbicides. Moran’s presence was more than fact sharing. It was full of pleasant interactions with the public. One of the most heartwarming interactions was with a group of young children that stopped to admire the goats. A painted turtle emerged from the nearby marsh and crawled into the goat enclosure. The goats had never seen a turtle before, panicked a bit and started to run about. The concerned children gathered on their side of the fence near the clustered goats and spoke very softly to them, to reassure them that the turtle would not hurt them, because, “Turtles have no teeth.”

Fund raising is essential to keep the goats working on the trailside buffet of invasive plants. Moran hopes that enough funds can be raised for two months of goat work. The portable pen location is moved after a week and data is being collected to apply for funding from the Michigan Department of Natural Resources. Fund raisers have taken place at Evergreens Coffee and Bake Shop, an extremely trail-user friendly café on Pleasant Street adjacent to the trail just west of the pedestrian bridge over M-24. It’s a great spot to take a food break when hiking or peddling the Polly Ann. Details on fundraising, and how donations can be made to the conservation grazing goat project can be found on the Polly Ann Trail webpage. 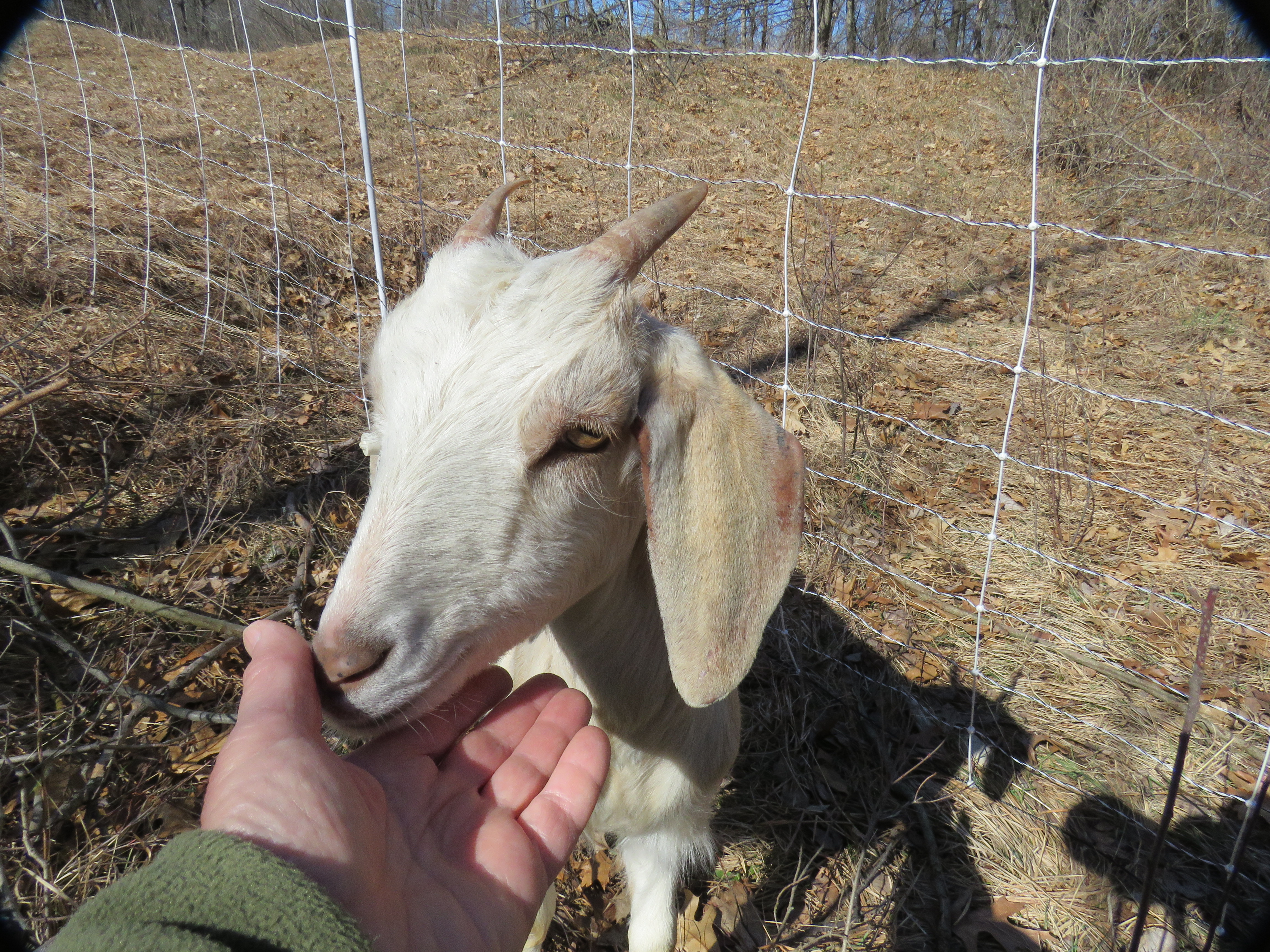 2 thoughts on “GOATS ON THE POLLY ANN TRAIL”