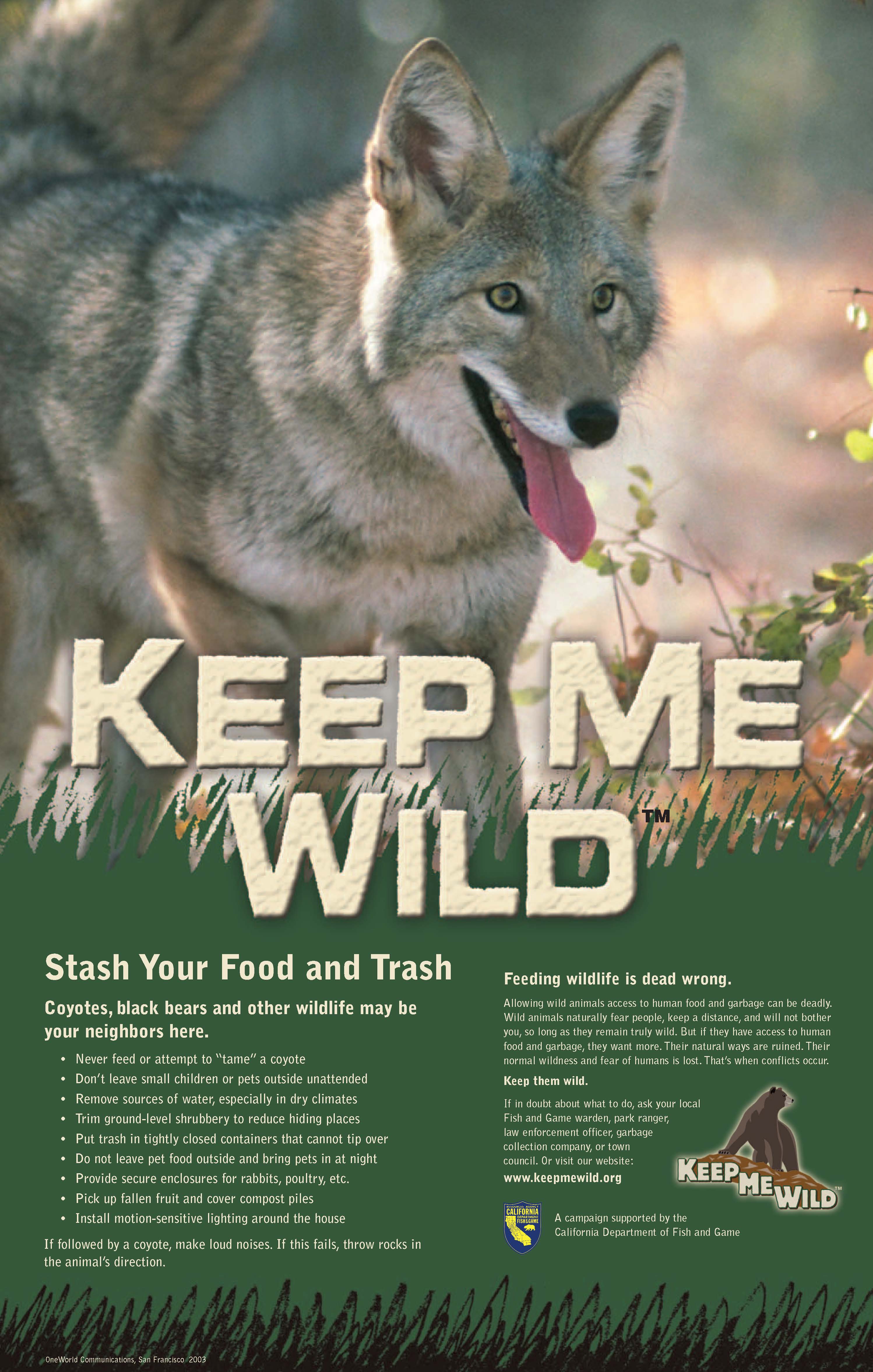 The eastern coyote (Canis latrans) is an intelligent, curious, and highly adaptable animal. Although once confined to the great American deserts and prairies where they were targets of ceaseless eradication campaigns, coyotes have now colonized our nation from coast to coast. “Unlike wolves, which succumbed quickly to predator control measures, decades of intensive persecution did not eradicate coyotes – the unrelenting pressure on them did invoke an ancient coyote biological imperative: It triggered larger litters of pups and colonization behavior that pushed them into new settings everywhere.” – Dan Flores in his 2016 book Coyote America. 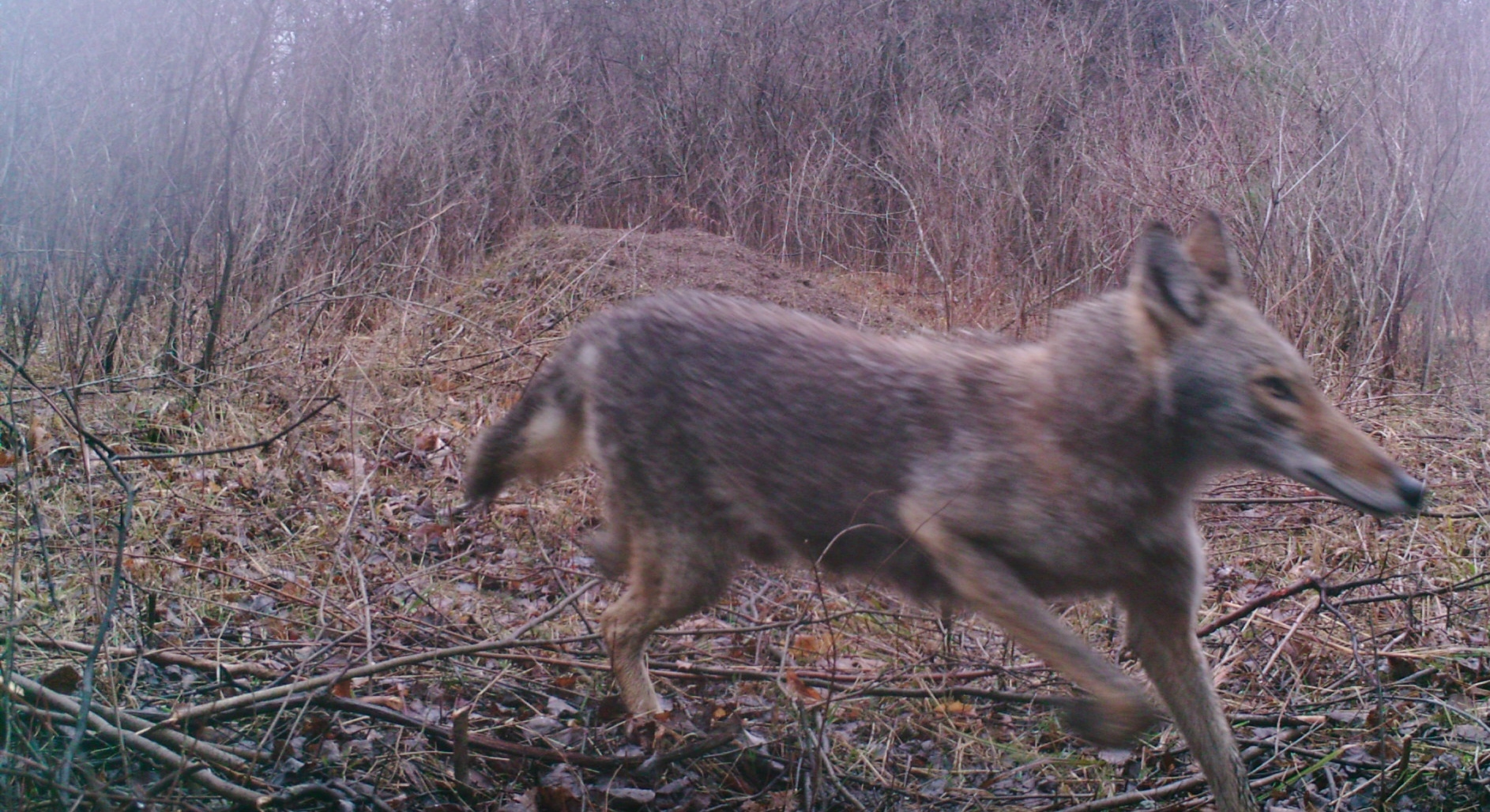 Today coyotes inhabit forests, mountain ranges, river valleys, coastal wetlands, grasslands, meadows, enormous wildlands, and public parks. Coyotes are no longer a phantom of the urban landscape. They have adapted to life in big cities including Chicago, New York, San Francisco, and Detroit. Every county in Michigan has coyotes. They are found from coast to coast and are a part of the American landscape. Coyotes are incredibly opportunist and accept whatever nature or humans provide in the way of habitat and food. The entrée list is long and includes meadow voles, rats, rabbits, roadkill, snakes, frogs, fish, fruits, fawns, insects, and pet food. They are also putting a dent in golf course loving Canada Goose populations and will readily take eggs and flightless goslings. 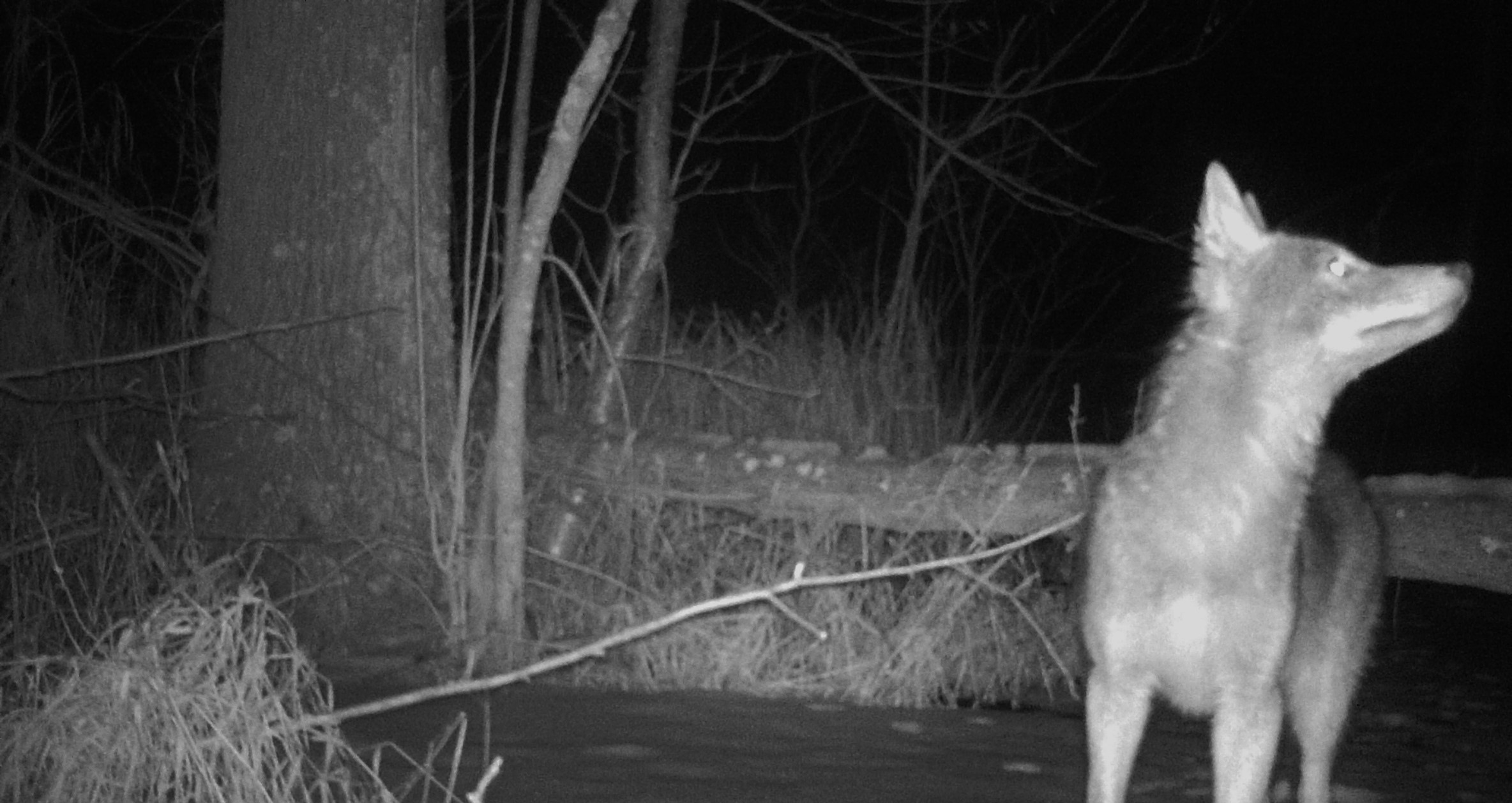 Oakland County is Coyote Country. Coyotes are learning and adapting to our ways far faster than we even try to learn their ways, however living together in peace is practical and possible. There is no reason to be frightened by a simple sighting of a coyote. Unfortunately, print and television media sometimes respond to increasingly common sightings with sensational fear-inducing news stories using phrases such as “The coyote was seen lurking in the woods.” Coyotes do not “lurk” in the woods any more than a deer or squirrel “lurks” in the woods. For the past few weeks sightings have increased in Oakland County as they do this time of the year. It’s usually only a fleeting glimpse, or an image captured by a motion-activated camera trap. 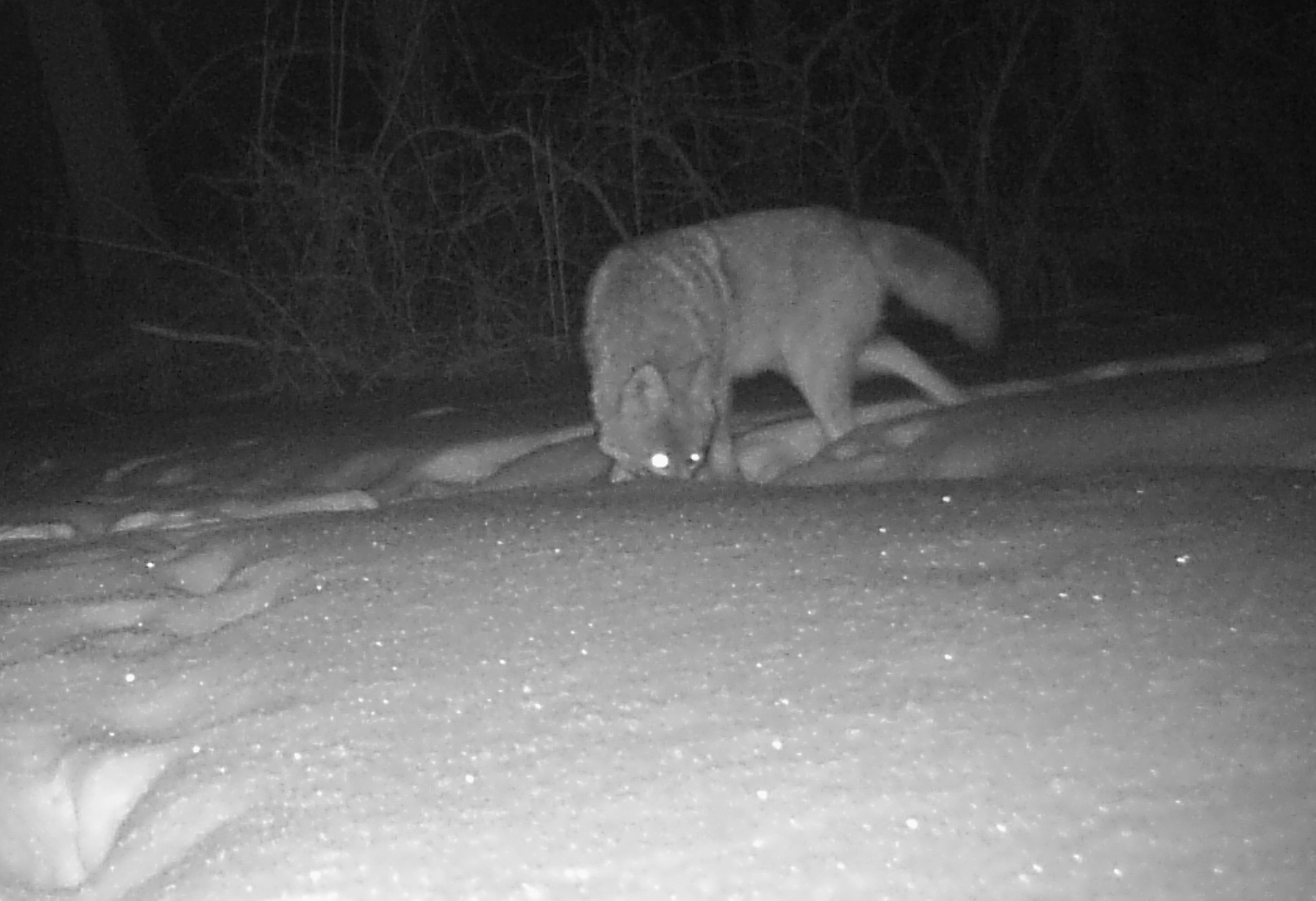 Normal coyote behavior includes being active day and night, hunting in fields for meadow voles, dashing across trails and roads, playing in fields, and yipping and howling during the night. They could be sitting in plain view, relaxing on a hilly vantage point, watching human activity from a distance and sometimes watching dog walkers as they wander. Coyotes, just like dogs and humans, are curious and very aware of their world. We are part of their world. 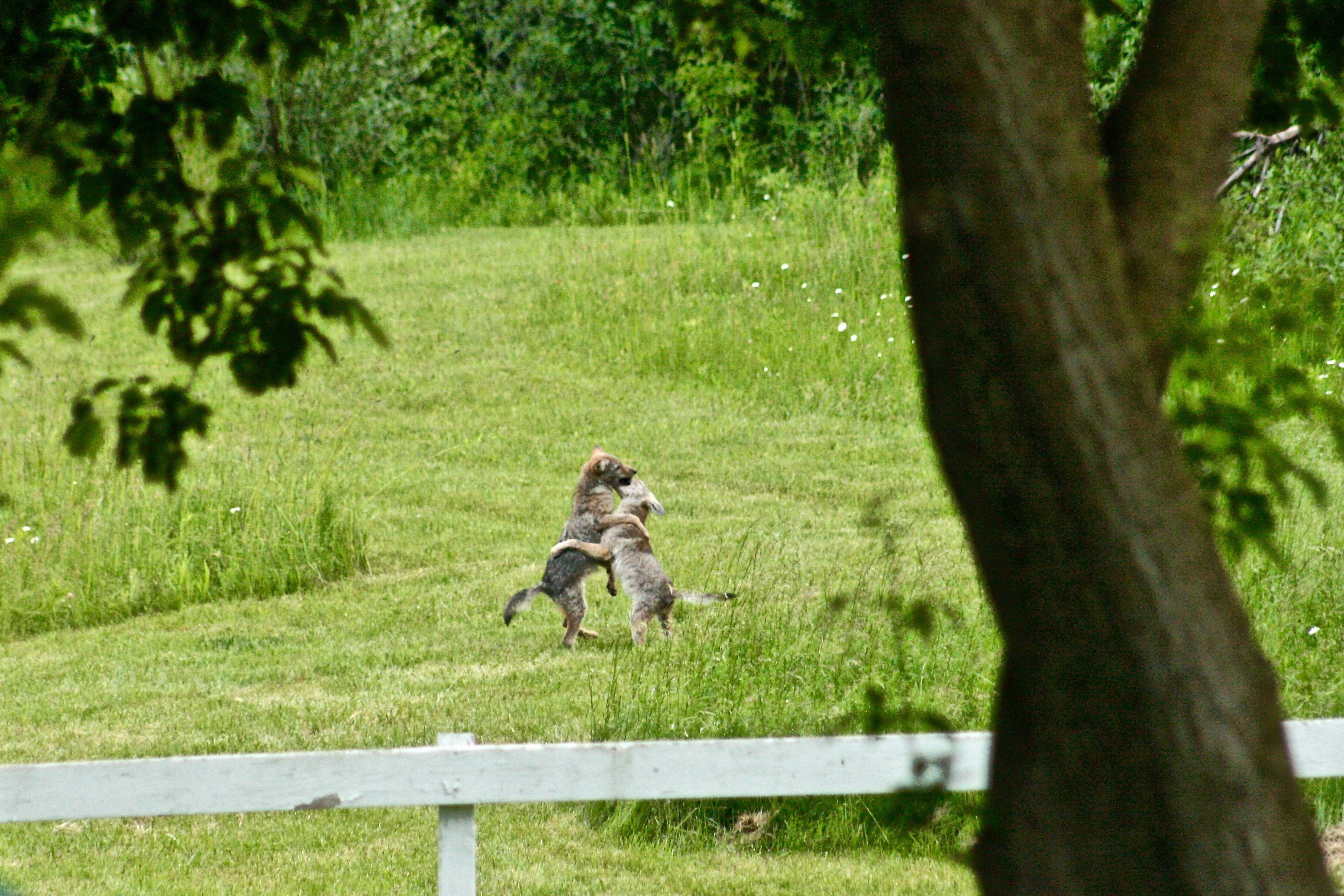 There are ways to keep coyotes wild and away from you. If a coyote is encountered in the neighborhood or your yard, it’s important to never turn and run away. The message given to the coyote tells it, “I am top dog – the human is afraid.”  Keep moving forward and yell at the coyote. It will leave. The one exception is at a coyote den. Don’t approach. Don’t bother the coyote. It may very well stand its ground just as domestic dog would stand its ground to protect its pup. 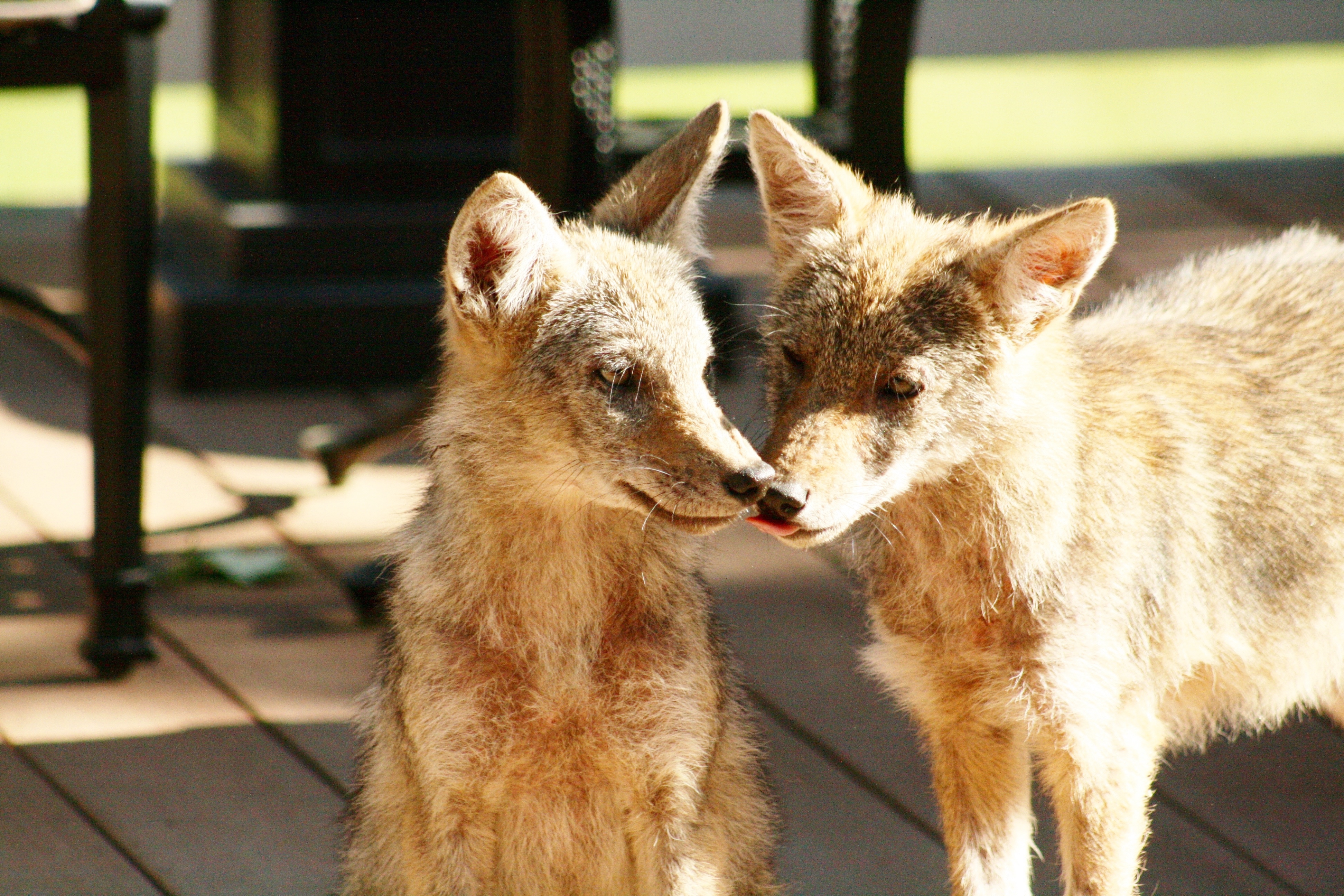 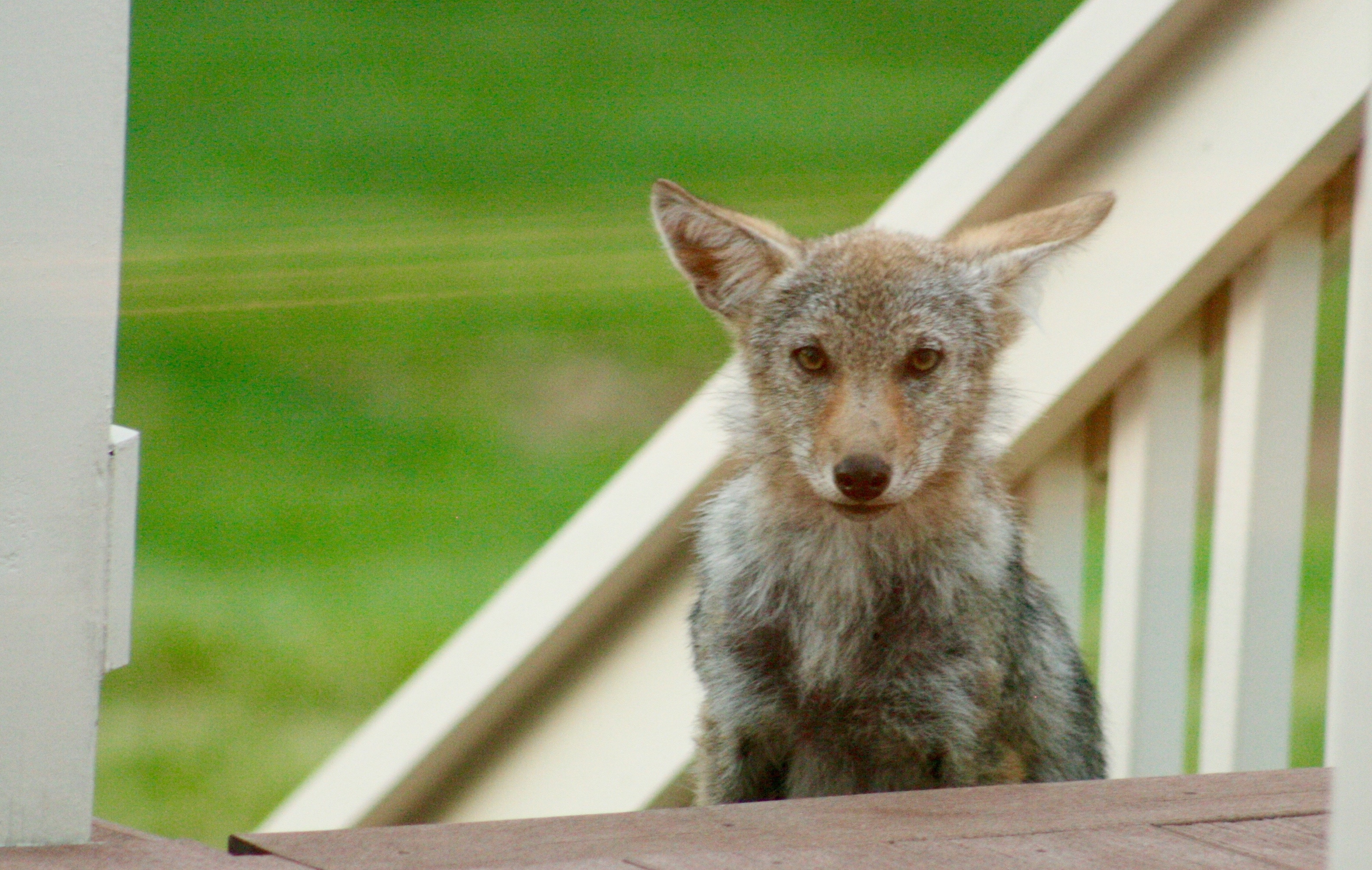 Feeding coyotes intentionally or unintentionally is dangerous for they will associate the human presence with a food source. A well-stocked bird feeder with spillage will attract small mammals, which in turn may attract coyotes. Ignoring the presence of a coyote will encourage the coyote. If there are no negative consequences for staying close to humans and homes, there is no reason to leave. That was the unusual case last summer of coyote pups that took to playing and napping on one homeowner’s porch in a suburban neighborhood in Oakland County near a wooded area.  She ignored their presence and watched from inside. 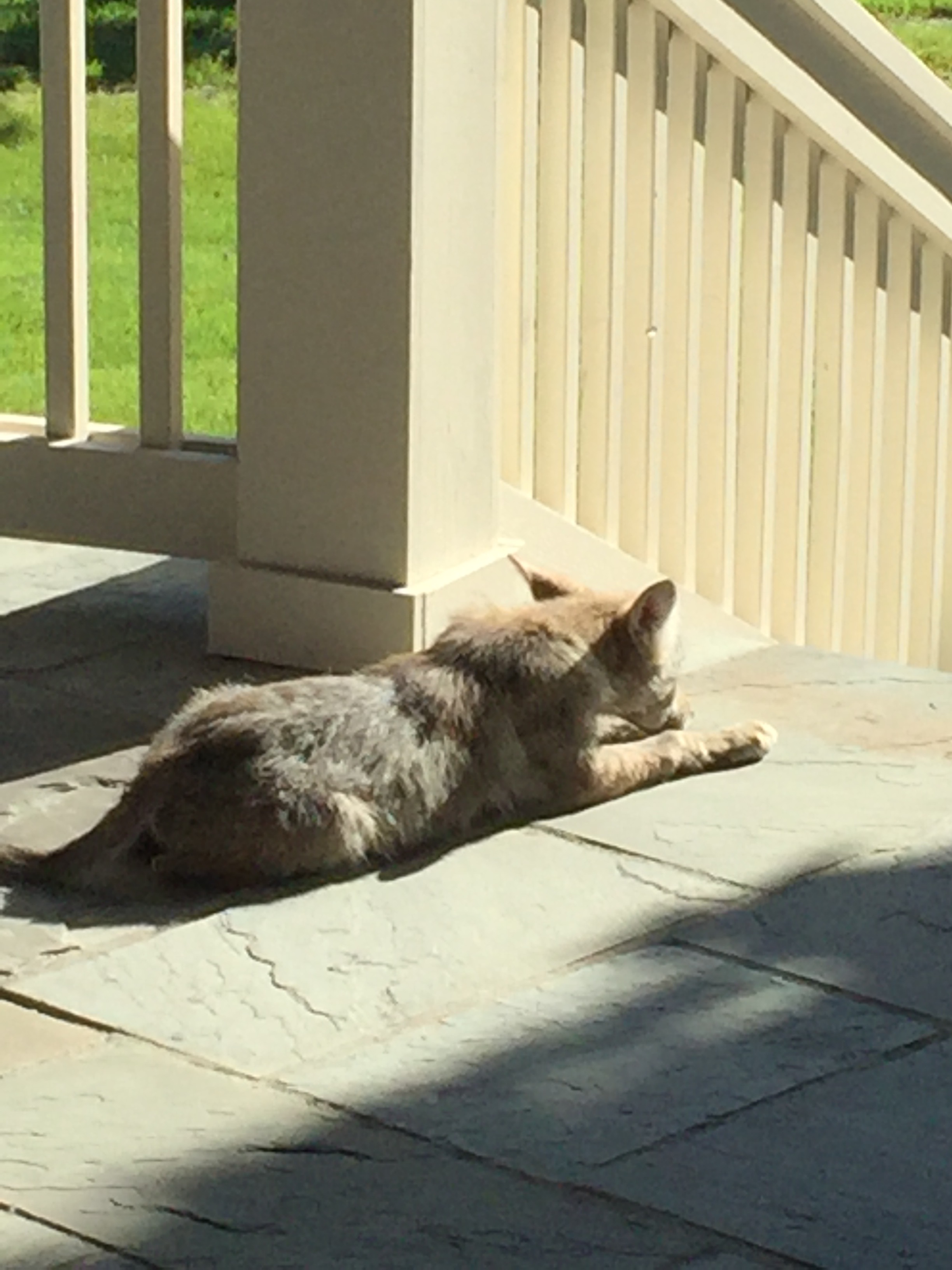 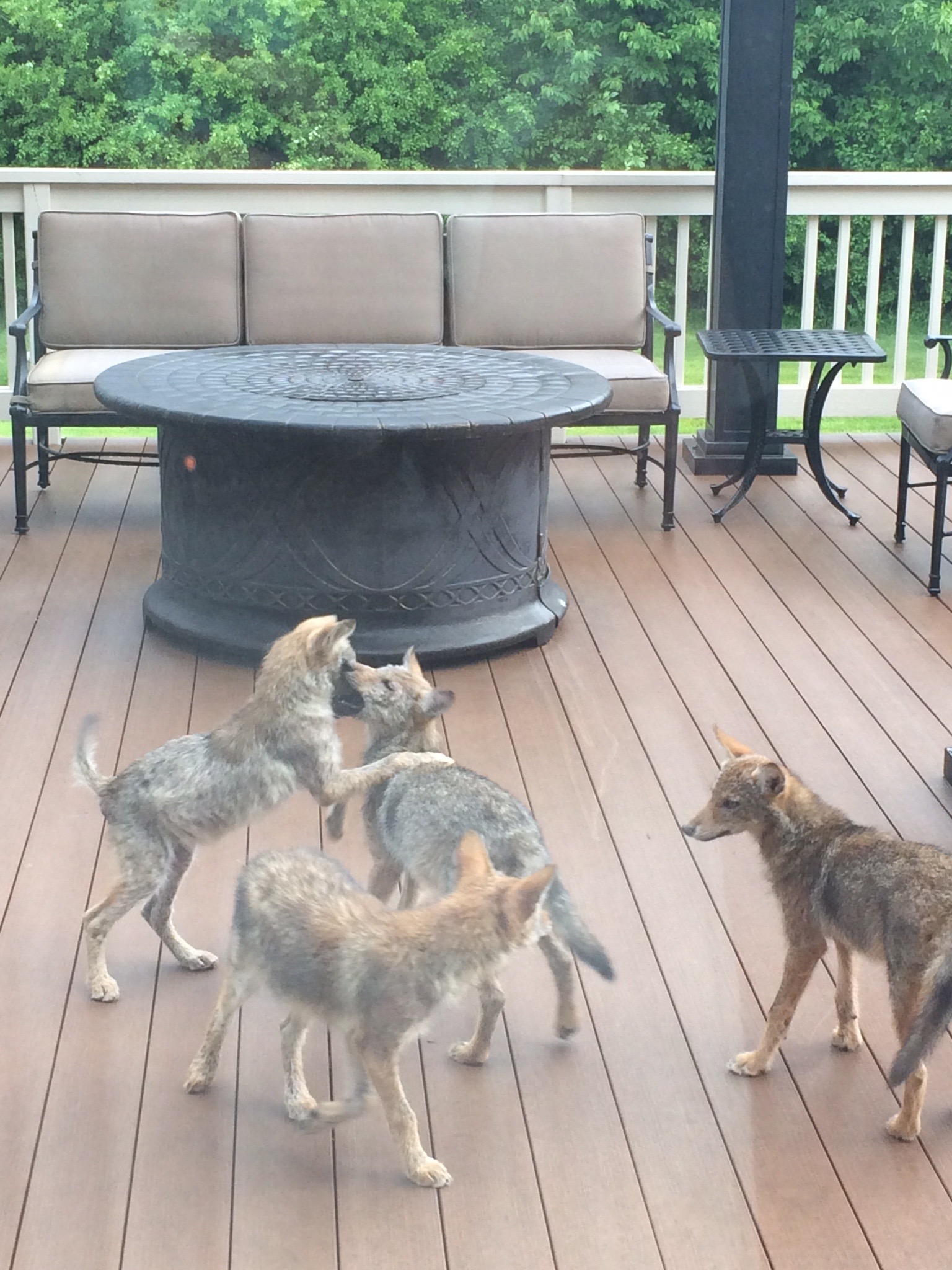 If that homeowner had banged pots and pans or loudly yelled “Go away Coyotes!” or just pounded on the window they would have left. Being “Big, Bad, and Loud” sends a clear message to the coyote: “Go away, stay away.” Keeping coyotes wild and wary is the key to coexistence. Killing a coyote does not make a community healthier or safer. Another coyote will fill the vacuum. It’s wiser, and a very easy process to “train” a coyote. It’s called hazing. It keeps coyotes wild and wary and is the right thing to do. 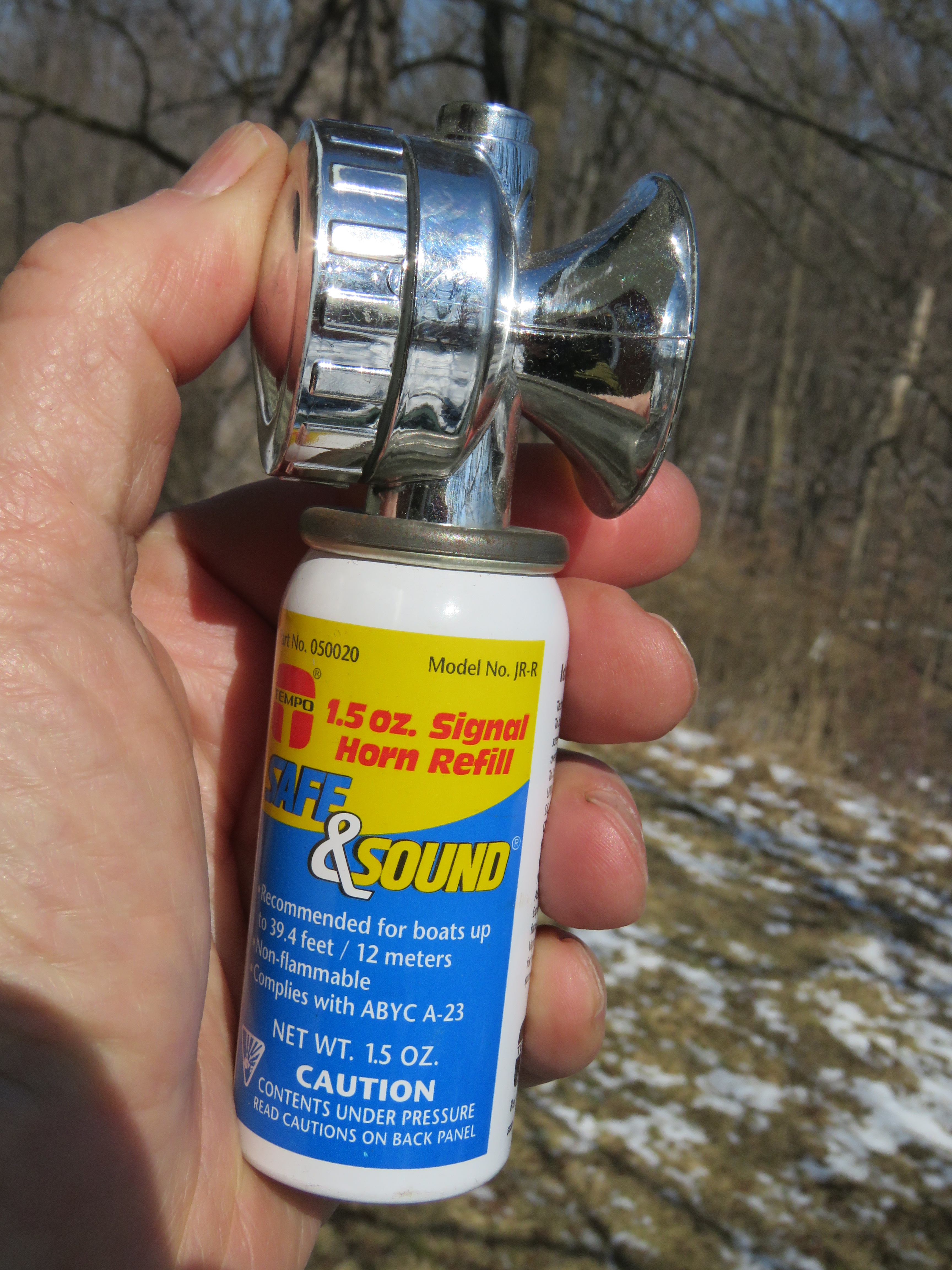 Hazing, or aversive conditioning, is the process of disturbing a coyote’s sense of security to such an extent that it decides to stay away. Hazing is a powerful tool for the homeowner to use to reinforce a coyote’s natural wariness of people. Yelling at a coyote, blowing a whistle, jumping up and down, or waving a broom about will quickly drive a coyote away from the yard. Popping an umbrella open and bluff charging the coyote will make it flee. A small air horn held in the hand and blasted, accompanied by human yelling is also good hazing. Hazing must be repeated, it’s not a one-time thing. Throwing objects while yelling at a coyote may send it on its way, or it may not.   Objects not to be thrown include hot dogs, eggs, steak, mangoes – you get the point. Be creative, but be sensible. Throwing food will bring the coyote back. 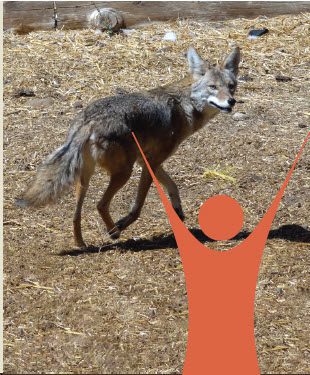 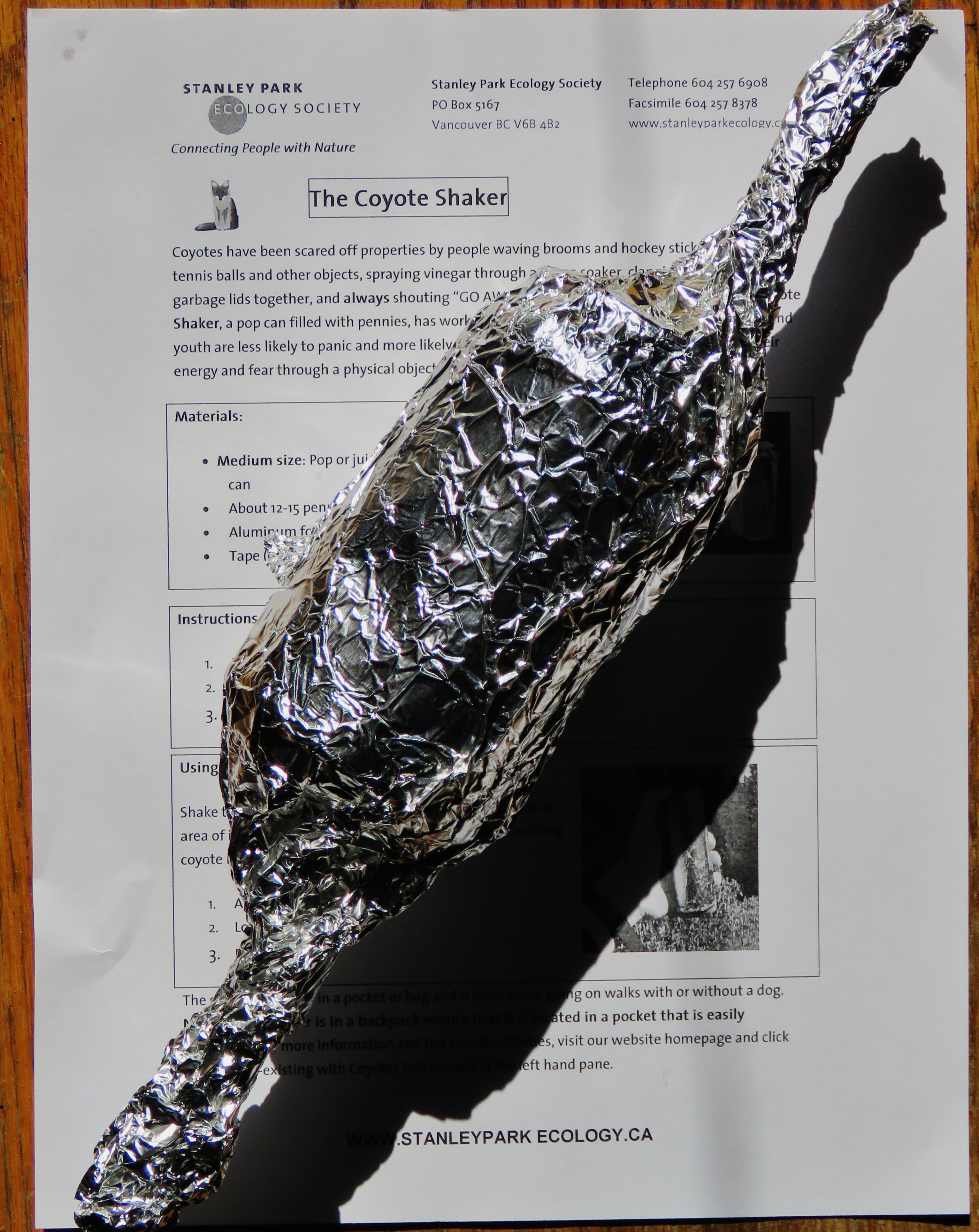 Some agencies suggest homeowners create a “coyote shaker” if a coyote tends to loiter on their property. Coyote shakers are easy to make and embolden children and encourage them to be active participants in hazing a coyote. All you need are about a dozen pennies, some aluminum foil and an empty pop can. Here’s how to make and use a coyote shaker, courtesy of Stanley Park Ecological Society in Vancouver. 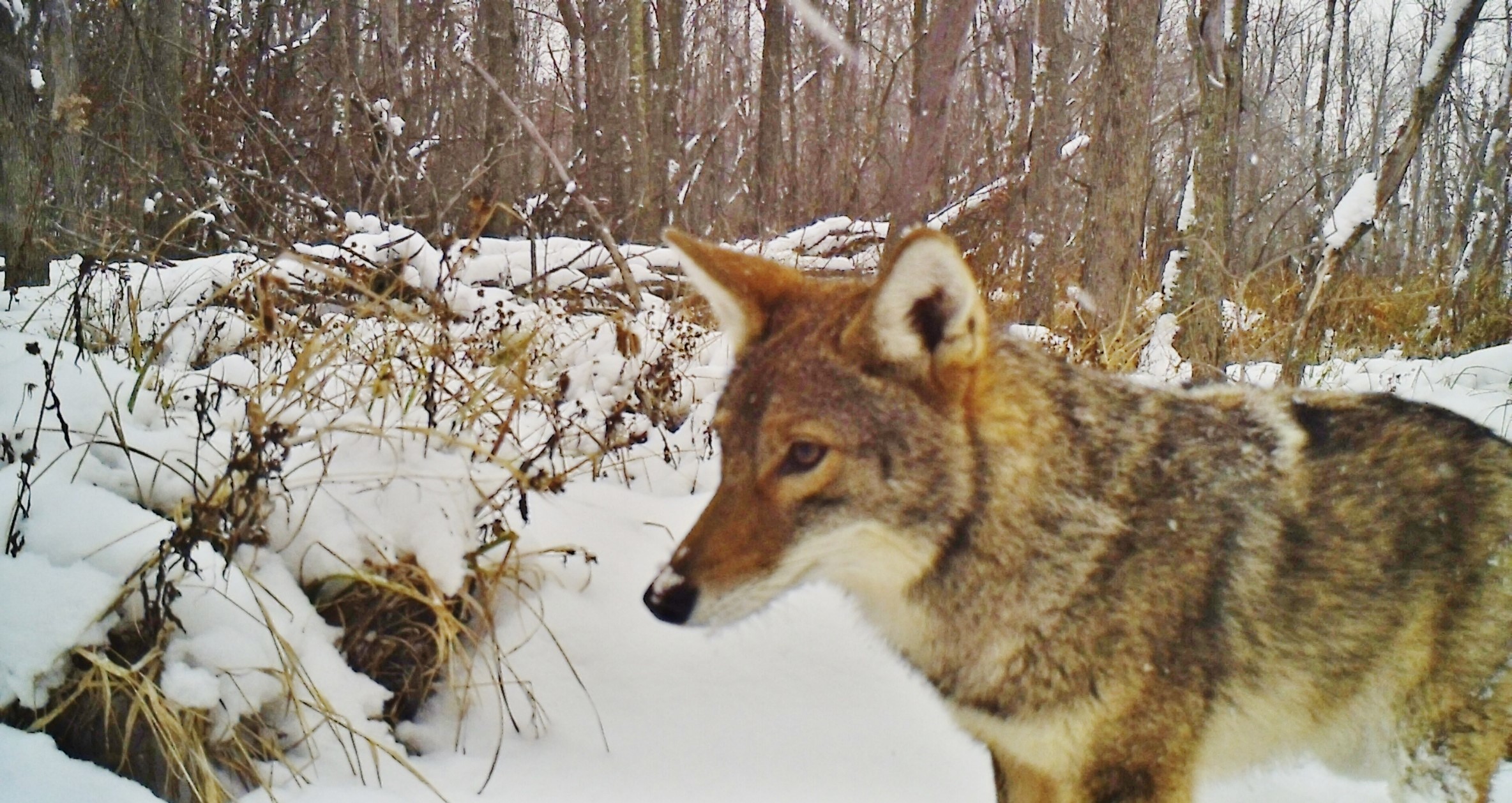 Spring is almost here and the trails of our county beckon. It’s time to head out and explore the wilder side of Oakland County, and practice coexistence with North America’s Song Dog, the eastern coyote.