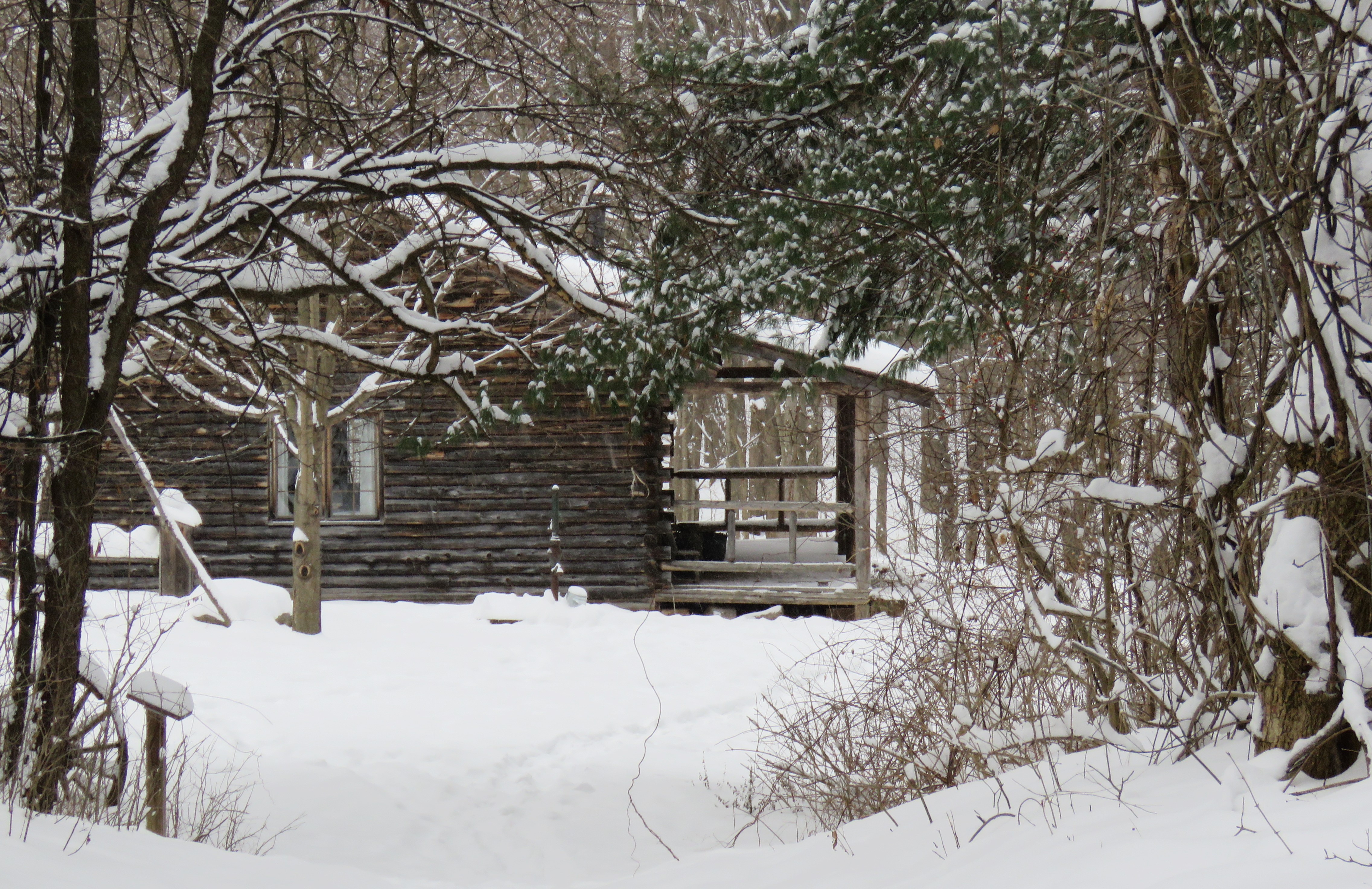 The morning was perfect for a winter exploration. Fresh snow fell much of the night and continued well into dawn. My trailhead greeting party consisted of cascades of accumulated snow sliding off the boughs of white pine trees, and what sounded like the excited warning chatter of an eastern fox squirrel. I stopped to assess the situation.

Squirrels don’t just sit on tree branches talking to themselves. I decided the squirrel’s concern was the motionless Cooper’s Hawk that I noted seconds earlier perched on a nearby tree. I trudged forward, the hawk flew off, and the squirrel scampered down about ten feet, leapt over to another branch and continued to watch me closely. Perhaps the chatter was a welcoming greeting for me after all. I chattered back and we shared pleasantries for a few moments.

That enjoyable distraction of watching the squirrel almost made me forget about the snow-muffled din of endless traffic. I was not in some far away wildland. I was at the E.L. Johnson Nature Center, a forty-acre site nestled between palatial homes in Bloomfield Township and the endless flow of traffic on Telegraph Road. I thought about the squirrel’s amazing adaptions as I hiked on. For they are able to accomplish the feat of a rapid head-first descent with ease. This is due to the joints in their ankles being super flexible and having the ability to rotate 180 degrees, allowing them to scamper down with claws digging slightly into the trunk. When you think about that, it’s a pretty amazing feat, akin to that of a human being able to rotate their feet until they were pointing backwards. 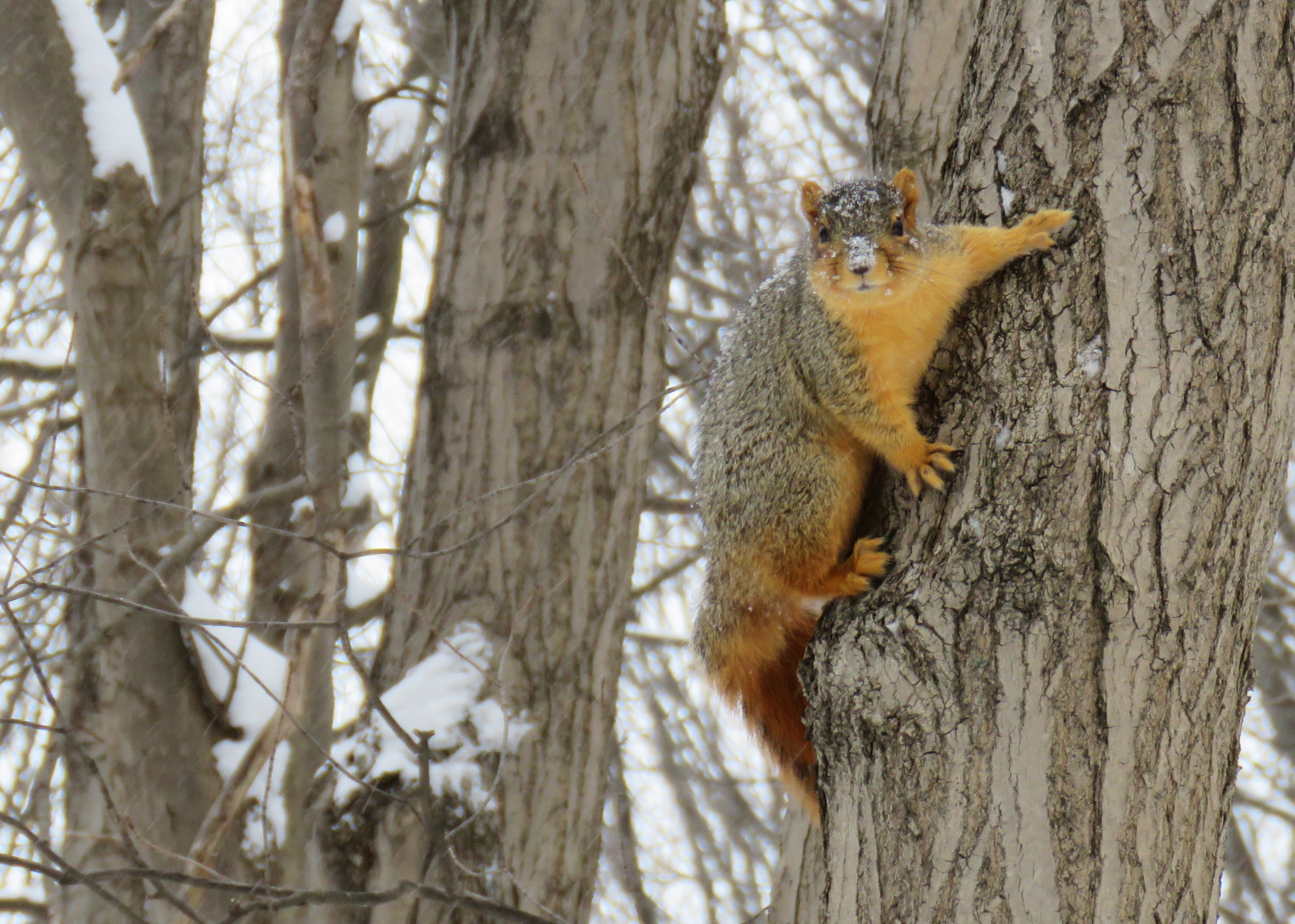 The nature center trail map shows nine separate trails and hints at highlights of what may be found along the way. All the trails are interconnected and total only two miles, but what a wonderful two-mile escape from the hustle of urban life they offer. Use the map as a guide only, and let nature—and the excellent interpretive signs along the way—be your guide. Just because a trail is labeled Fox Ridge Lookout does not mean it’s where one might see a fox, nor does Cottontail Pass guarantee a rabbit sighting. However, there are several secured trailside enclosures along the route that house injured or orphaned species, guaranteeing the sighting of a white-tailed deer, a red-tailed hawk and a great horned owl. These injured or orphaned creatures cannot be released to the wilds and now serve as educational ambassadors for their species.

The waning days of February are an invigorating and peaceful time to visit as the duel between the seasons slowly accelerates. Bloomfield Hills Schools has integrated the nature center into their curriculum for grades one through eight. Once spring arrives, the trails will at times bustle with student activity. About an hour into my extremely slow-paced exploration, I encountered a family on snowshoes enjoying this oasis of wildness. We chatted briefly and I discovered that snowshoes can be rented on weekends when the nature center is open. I watched their youngest start excitedly uphill towards the cabin, the primary destination of my trek.

The snow laden branches of trees framed the cabin perfectly, creating the historical illusion that I was back in the late 1800s, and that was not far from the truth. In many ways I was. The Nature Center website states, “When the district decided that a good way to enhance Michigan studies for students would be to purchase, relocate and restore a log cabin of the early 19th century era, the availability of the land at the Nature Center made it a logical destination site. The search for an existing cabin of that time period was to no avail so the 1985 reaction millage funds were used to build a facsimile. It was furnished to approximately represent the late 1800s time period.” The cabin was completed in 1987 and the barn followed in 1994, setting the physical theme for an exploration of a time period before electricity, modern amenities and today’s obsessive need to always stay connected. I also discovered that the E.L. Johnson Nature Center is a key partner in teaching Next Generation Science Standards (NGSS) to Bloomfield Hills Schools students. Next Generation Science Standards is a multi-state effort to create new education standards that are “rich in content and practice, arranged in a coherent manner across disciplines and grades to provide all students an internationally benchmarked science education.”

Before continuing on my trek, I brushed snow off a trailside interpretive sign near the cabins that read in part: “A Trip Into The Past…These two cabins were built to provide our school children an opportunity to ‘experience’ living in the past when spending time here with their classes. Students participate in typical farm chores such as pumping water, moving logs, cutting firewood, and making a wood stove.” Those words brought to mind one of my very favorite passages from A Sand County Almanac, by Aldo Leopold. Leopold mused about our dangerous disconnect from nature back in 1948 with these increasingly relevant words,

“There are two spiritual dangers in not owning a farm. One is the danger of supposing that breakfast comes from the grocery, and the other that heat comes from the furnace.” 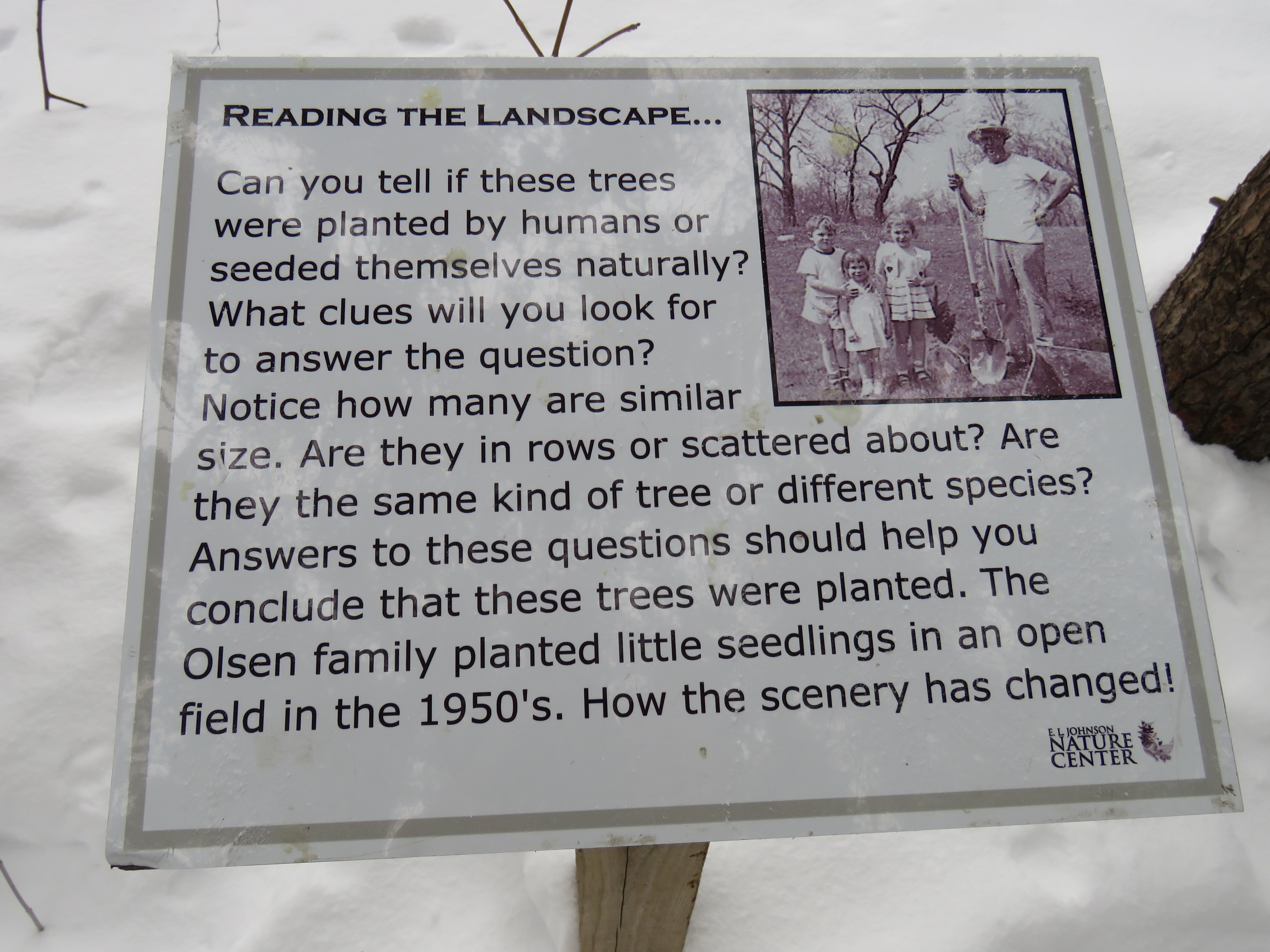 With only an hour left to explore, it was time to keep meandering from trail to trail, and sometimes back again, as I followed what I often “preach” to those that want nature encounters: Walk slowly, stop often, look and listen. My trudging through deep snow along the Streamside Trail on the north side of the property was especially enjoyable and brought a surprise. I noted the bounding tracks of a creature near an open area of the Rouge River tributary, tracks that disappeared at the water. Mink! This sleek, dark-bodied, semi-aquatic member of the weasel family is about as versatile as predators come as this hidden habitat was ideal.

From there I backtracked towards the Sugar Shack that will spring to life in March. I can image the excitement of those that gather for the center’s annual sap festival. After passing the Sugar Shack, I noted something dangling from high up in a tree. The gray basketball-sized object turned out to be a now empty bald-faced hornets’ nest that weathered the season well. A chickadee flitted nearby; I suspect it was trying to access long dead and frozen larvae. I then headed along the Pond Side Trail that embraces the southern part of the property and looped all the way around to an open section of water with an observation dock, a hub of activity in warmer months.

My exploration ended with a visit to the modern Nature Center building with its excellent displays of native Michigan wildlife that included a black bear, gray fox and a wealth of information on coexisting with deer and coyotes, as well as special display for the upcoming maple festival. I relaxed by the fireplace with guides Jody and Dennis, and caretaker Eric as we chatted about the birds outside the viewing window. The viewing window is even equipped with binoculars guests may use.

I contacted Dan Badgley, the longtime nature center manager, after returning home for his thoughts. His words revealed his obvious love of the land and the activities and opportunities that keep residents and others connected to nature in Bloomfield Township, a township devoid of any public parks with the notable exceptions of the E.L. Johnson Nature Center and the Bowers School Farm. He said,

“This nature center is a great place to get outside in winter for some fresh air, hearty exercise, enjoy wildlife, or simply get away from your video screen. A recent survey indicated our visitors value our trails and walking more than any other activity. In another month sap buckets will be hanging from our sugar maple trees and that sweet aroma of maple syrup will be coming from our wood-fired evaporator in the sugar house.” 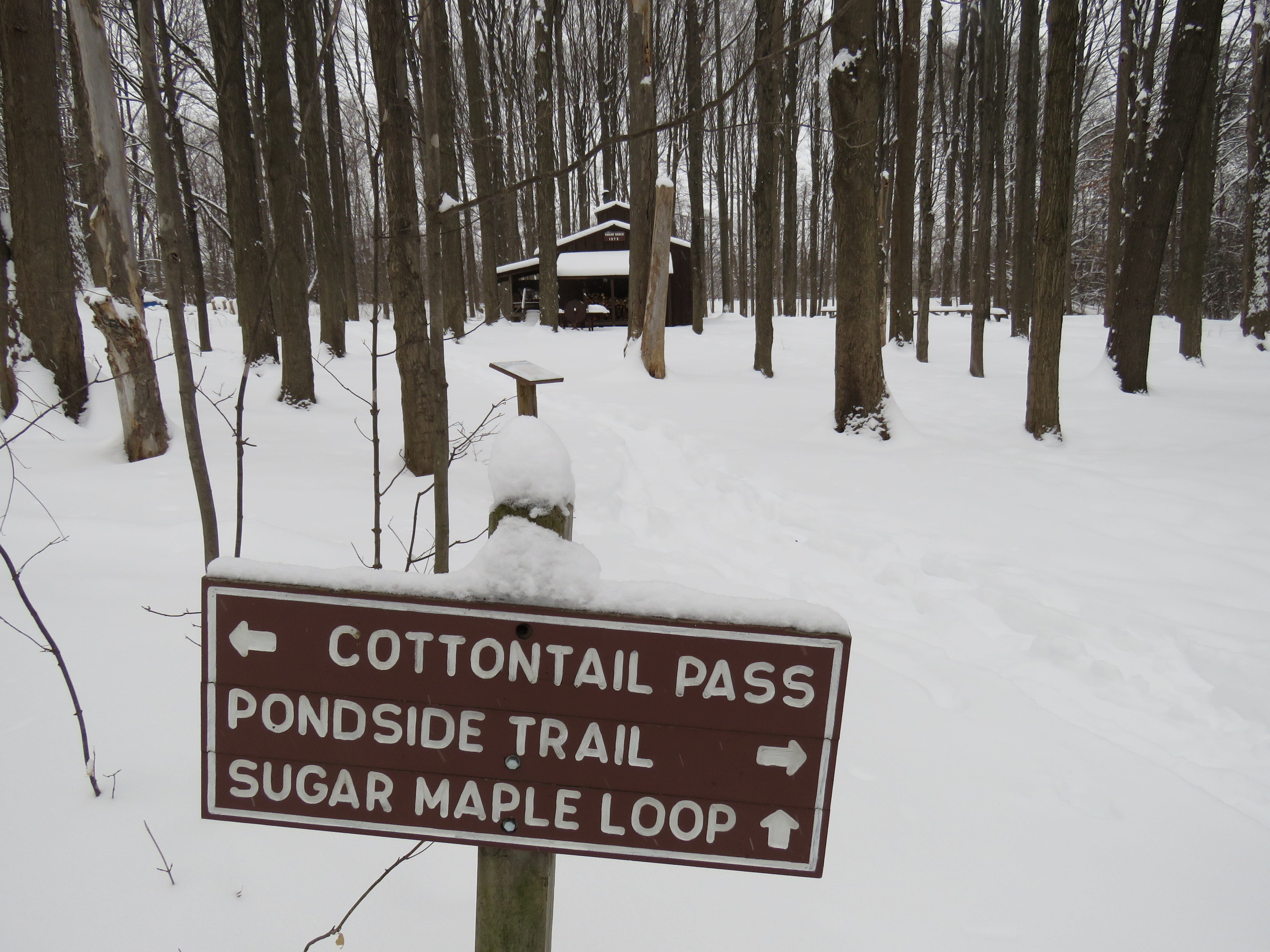 For detailed information on the nature center, including trails, hours and upcoming events including the maple festival, visit their website. The nature center also hosts summer day camps that help reattach children to the world of nature. Campers navigate trails, learn about wildlife, visit the log cabin, fish, and craft and perhaps develop a fondness of the wilder side of Oakland County—even when it’s only a 40-acre parcel for nature’s way. Find details for summer programs on their 2018 Summer Camp.