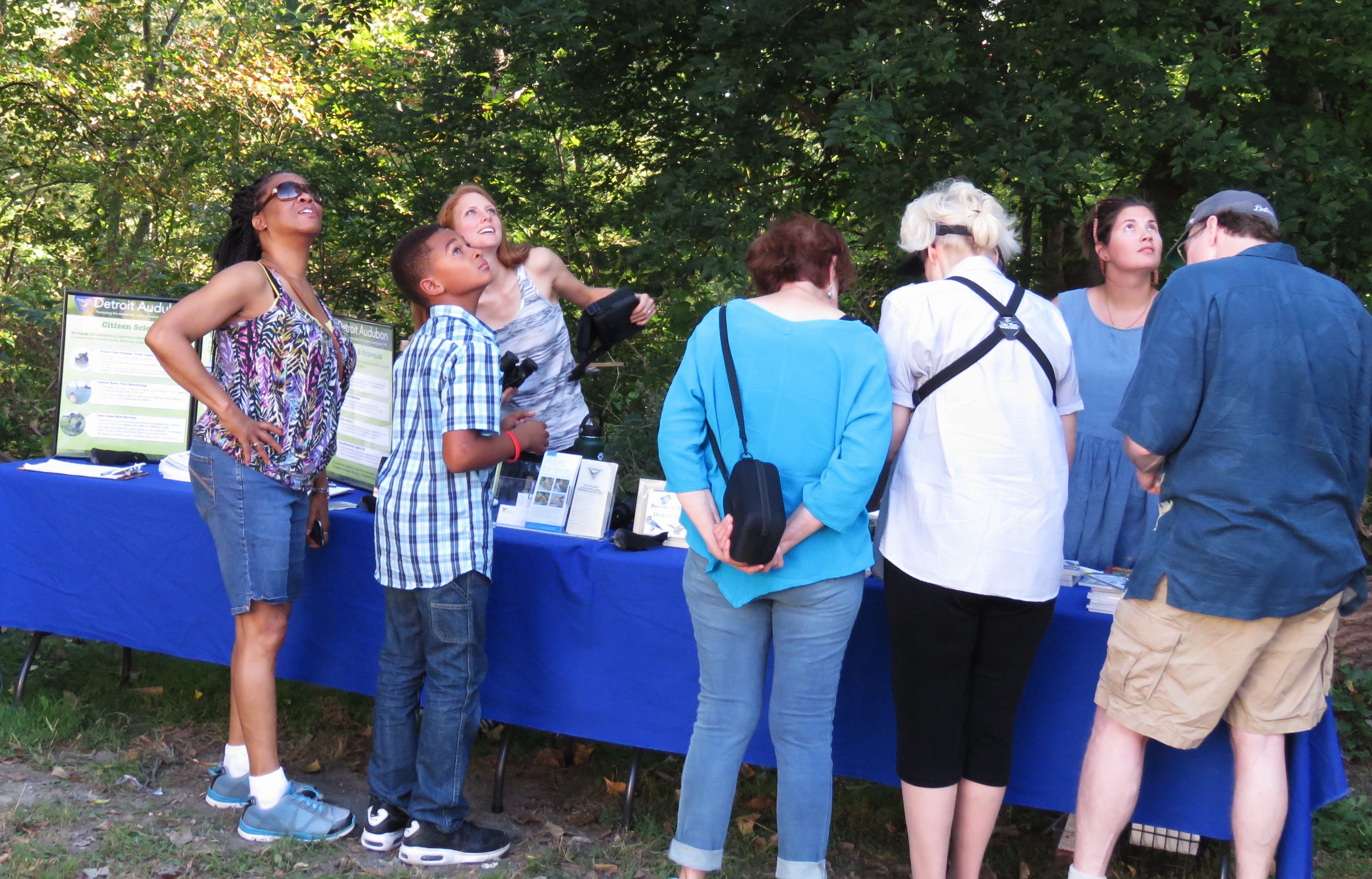 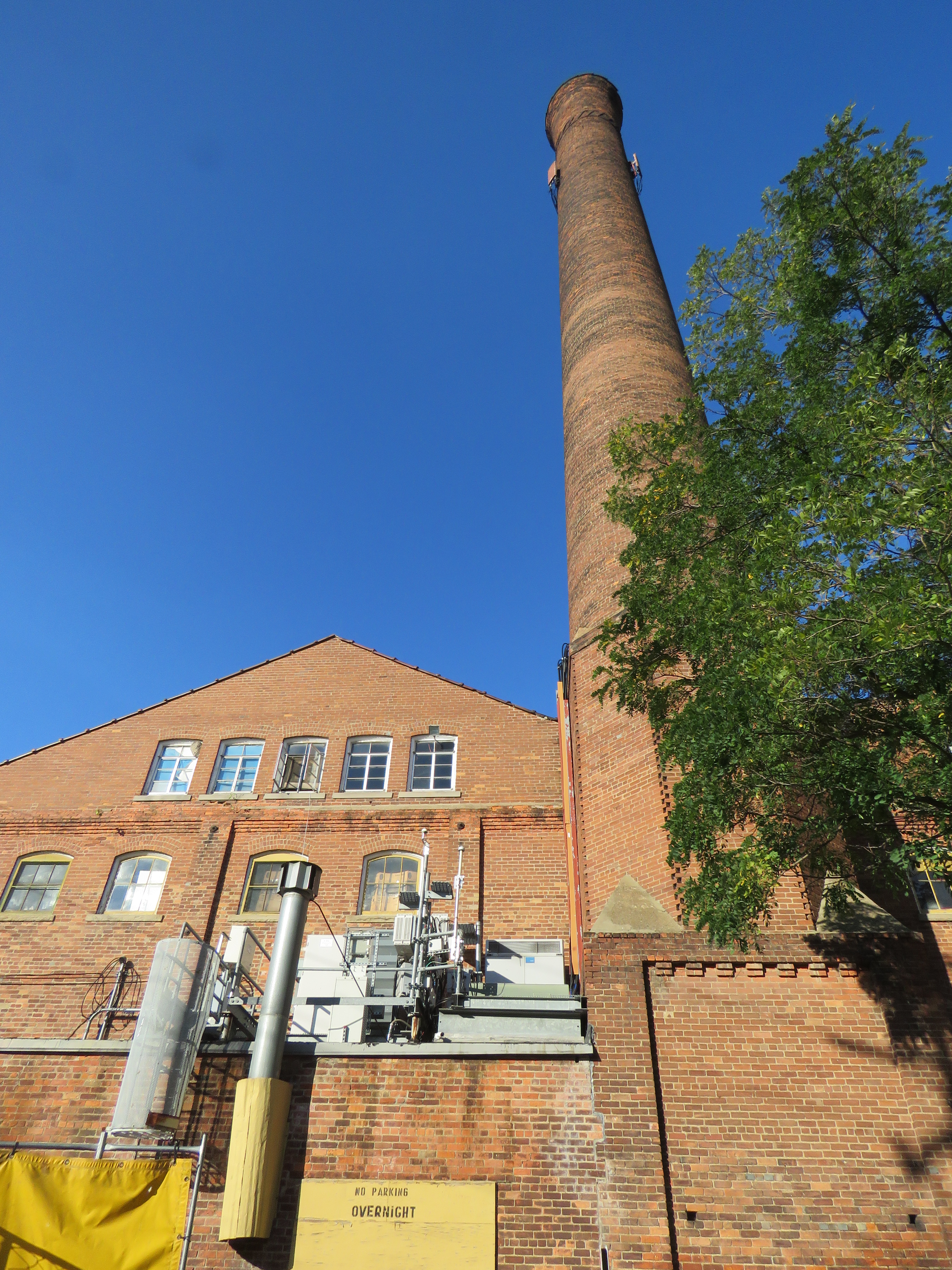 Chimney Swifts are found across the eastern United States, and once nested mainly in hollow old-growth trees and caves. But as Europeans pushed westward, colonizing the land and altering the natural habitat, the swift population actually increased as the swifts took to new suitable nesting cavities: the abundance of brick chimneys in small towns and later in cities. That artificial habitat was then, and remains today, highly desirable swift real estate. Chimney swift populations are once again decreasing as suitable brick chimneys deteriorate or are torn down, and modern unsuitable chimneys with chimney caps take their place, and old growth trees with large hollow sections disappear. 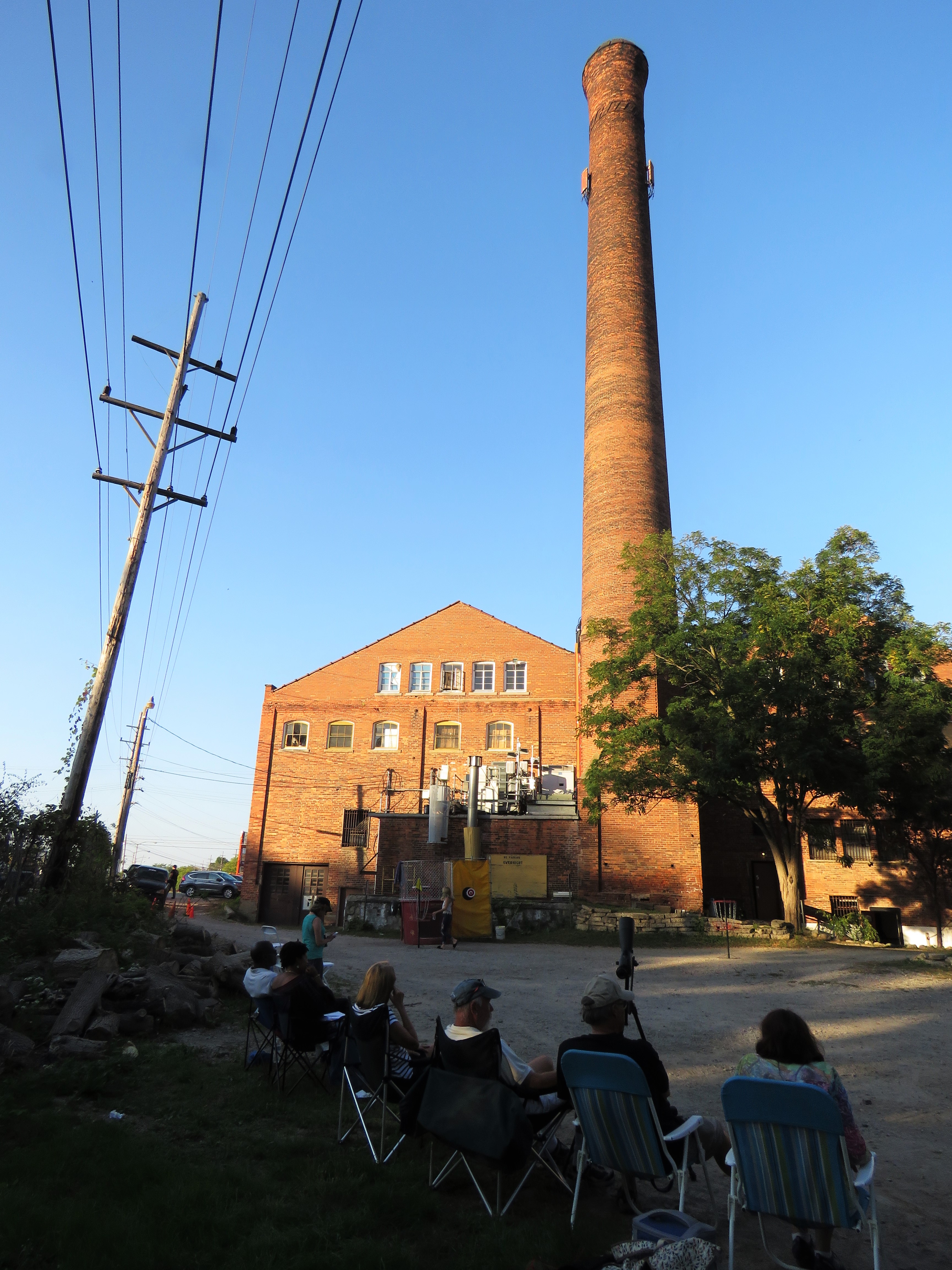 The primary insect-hunting habitat of the Chimney Swift remains open sky over towns and cities where they remain active during these unseasonably hot days of autumn. On any given warm day an Oakland County observer might look up and see a dozen or more of these agile creatures maneuvering in flight as they intercept insects. If watching a dozen is not exciting enough, how about a place where you may watch thirty-thousand or more swifts – at the same time. That place exists at the site of a 151-foot-tall historic chimney in Farmington. 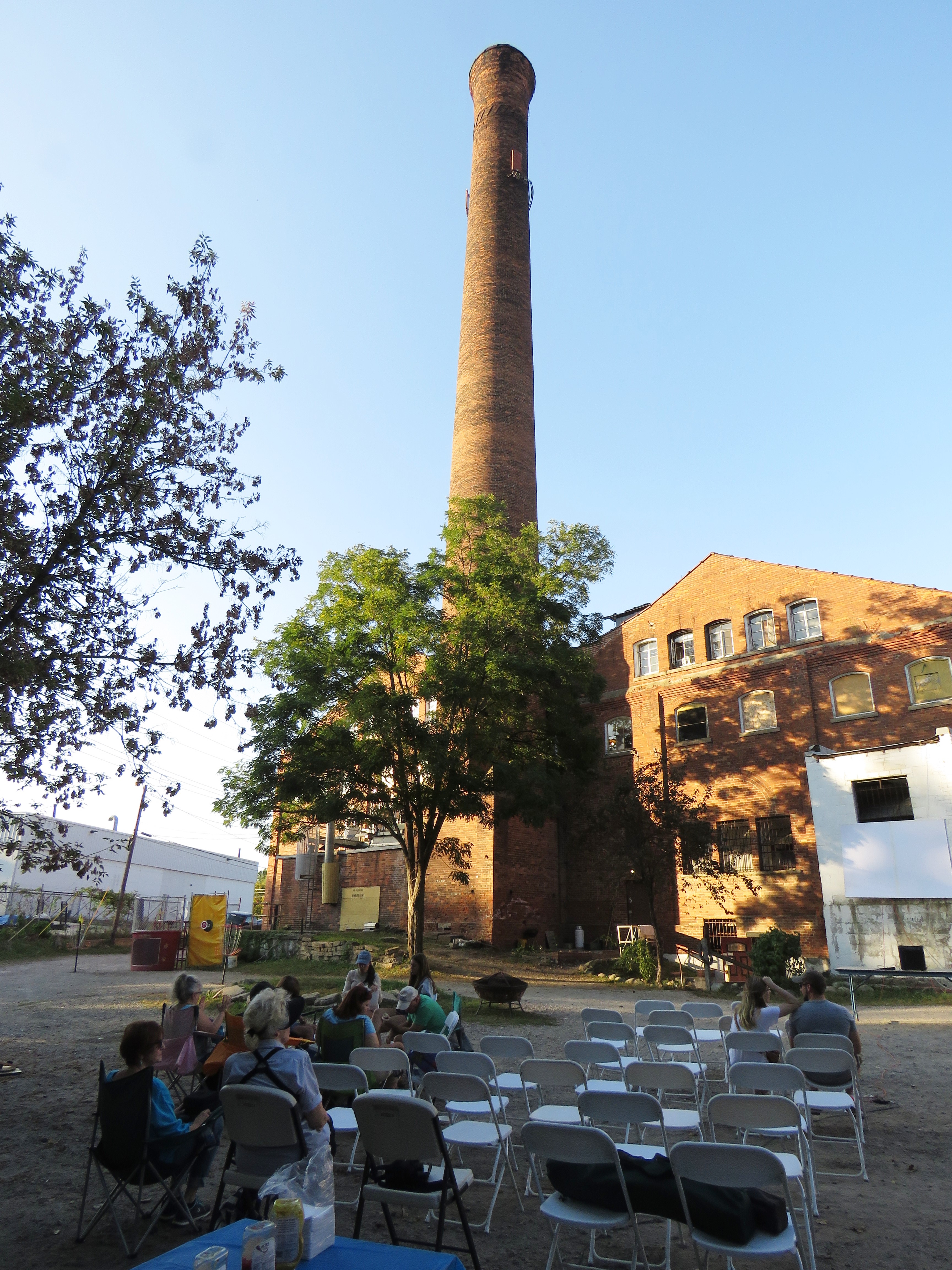 There are no words that can accurately describe watching tens of thousands of swifts swirling above a massive chimney like a living tornado as dusk darkens the sky, and then descending into the chimney when night falls. I witnessed this spectacle of nature’s way last weekend at the “Swift Sanctuary” in Farmington when I went to a public event sponsored by the Detroit Audubon Society on our side of the county line. They advertised their annual “Swift Night Out” event this way:

“Join us with our partners at the Swift Sanctuary to watch the spectacular show as up to 50,000 Chimney Swifts swirl around and around like a tornado before the avian funnel cloud swirls right down into this historic winery. A wooded area behind the historic winery abuts the Rouge River, so there may be some migrants lurking there as well. As far as we know this is the largest roost of Chimney Swifts in North America!” 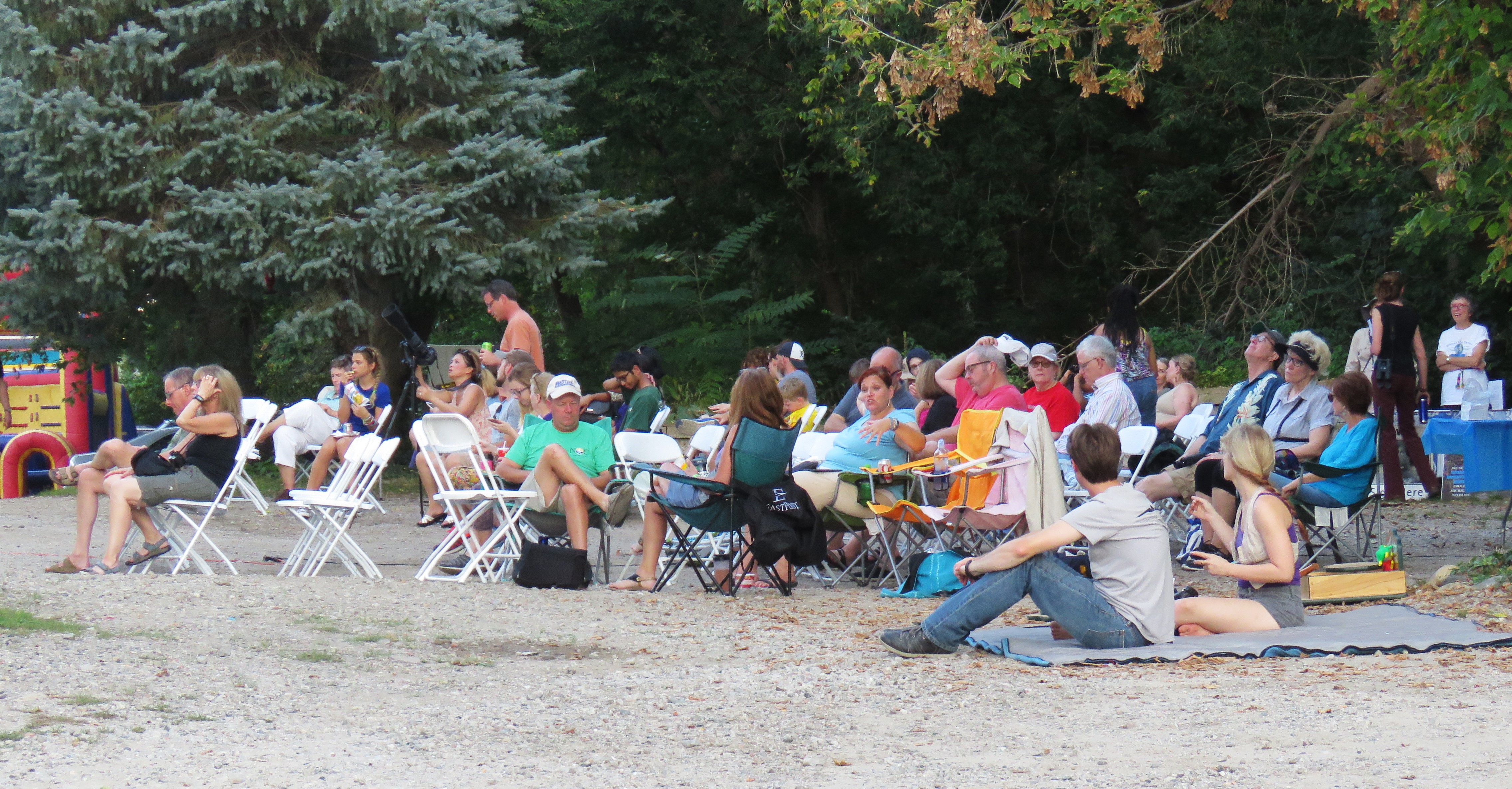 I was not disappointed and was left in awe as the sun settled and the chirping of swifts that seemed to appear from all directions swiftly drowned out the tree top buzz of a few late season cicadas. I sat down on a tree stump about 100 feet from the base of the chimney to watch and steady my camera, as others sat on chairs, set up telescopes or just made themselves comfortable on blankets with their eyes to the sky. However if it was not for the industrial revolution in the 1800s, followed by electric trolleys, wine making, prohibition and Detroit River bootlegging  adventures, last week’s event might not have occurred. Here’s the backstory, of the chimney and the swifts. 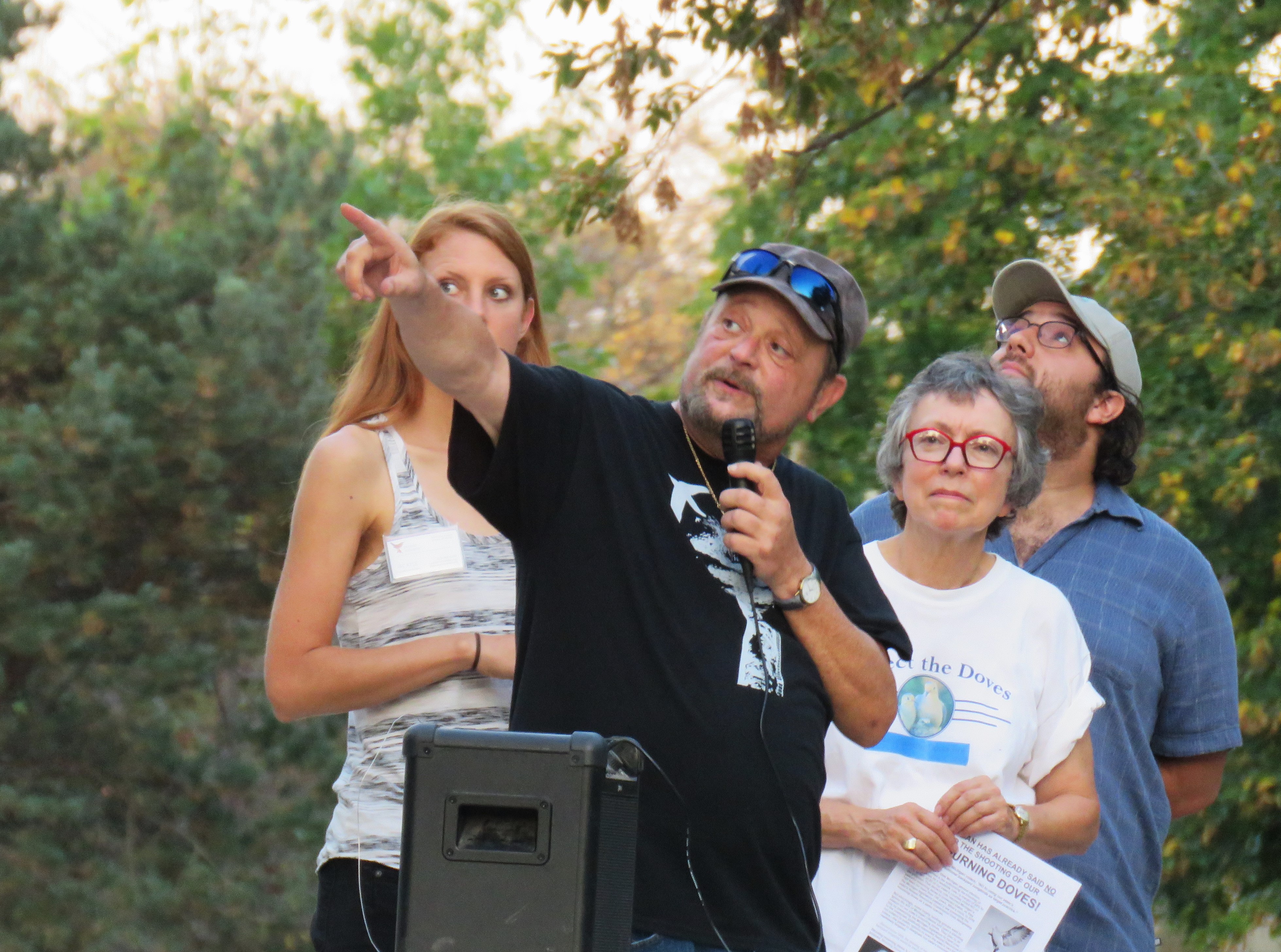 I talked at length with David White, the current owner of the site the swifts love. He explained:

“The historical old power house on Grand River and Orchard Lake Road, was originally built in 1898 and brought electricity to the area. It remained a powerhouse until 1930 with its main purpose being the production of electricity that operated the trolley cars that ran from Detroit to Farmington and north to Pontiac. In 1930 after prohibition, and automobiles took over, the trolley cars were no longer operating. A couple of brothers from Canada came over and started the Windsor Club LaSalle Winery.” 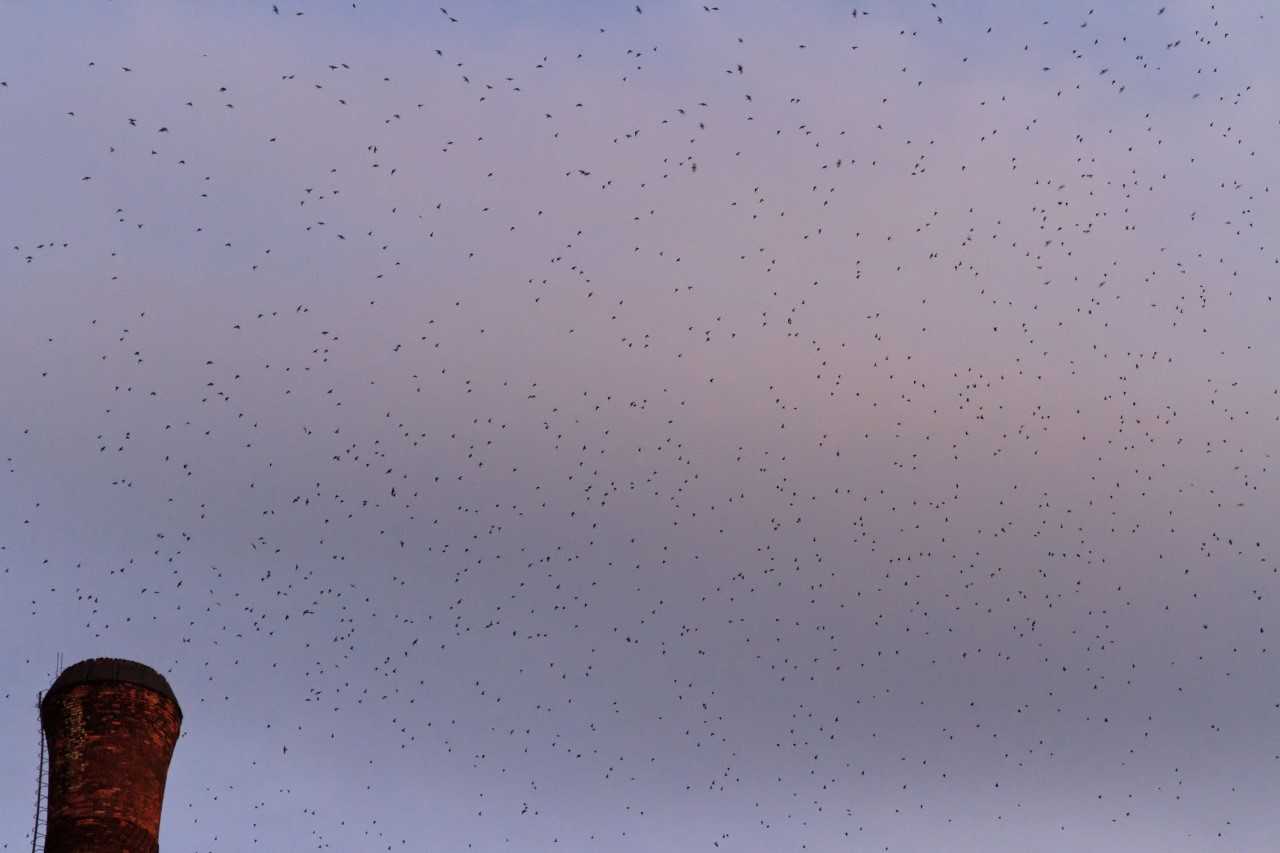 The Michigan Grape and Wine Industry wrote this about the site:

“In the fall of 1932, as Prohibition was coming to an end in Michigan, business-savvy Twomey began massive restoration of the electrical powerhouse of the Detroit United Railway into a large-production wine facility. Interestingly, he relocated his winery to Farmington on April 10, 1933 – the same month that prohibition was repealed in Michigan and eight months before the national repeal.”  If Chimney Swifts were already visiting the stack at this time, it remains a secret only the birds knew. 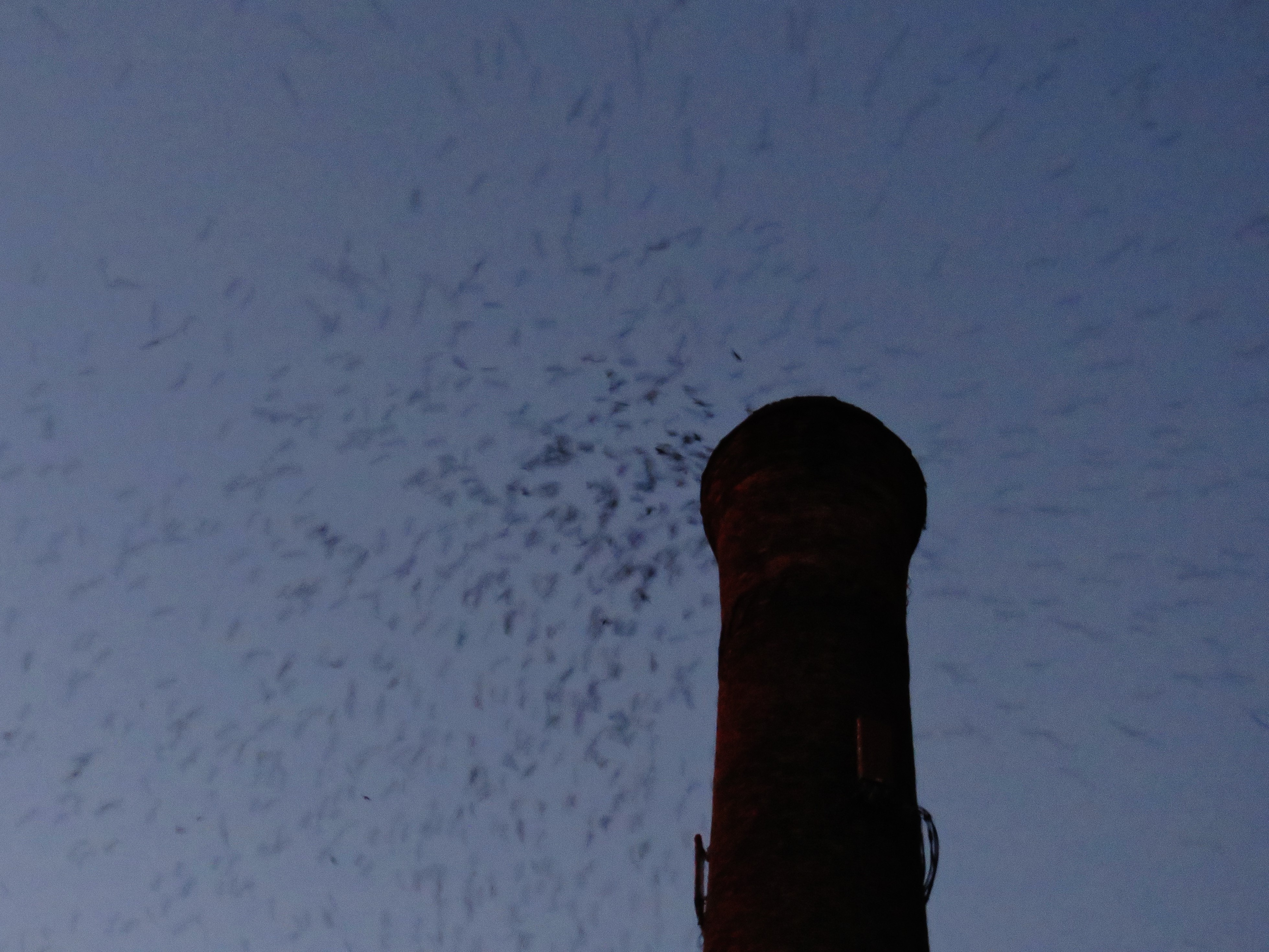 White went on to explain:

“Today there are 42 different companies sharing our 94,000 square-foot building, from artists to builders, and in the old wine vats area we run a Halloween haunted tour of the building and we have been doing this since 1988. The haunted tours have been a big attraction for Farmington and run Friday and Saturday nights in early October and then we begin to run it on Sundays and some weekdays as we get closer to Halloween.”

I quickly discovered White has a genuine passion for the swifts that share his historic building and he went on to explain the haunted tours help raise money to preserve the historical building. He included the fact that the chimney is now 119 years-old and it needs repair work that will require a crane to reach the 151-foot top of the chimney. 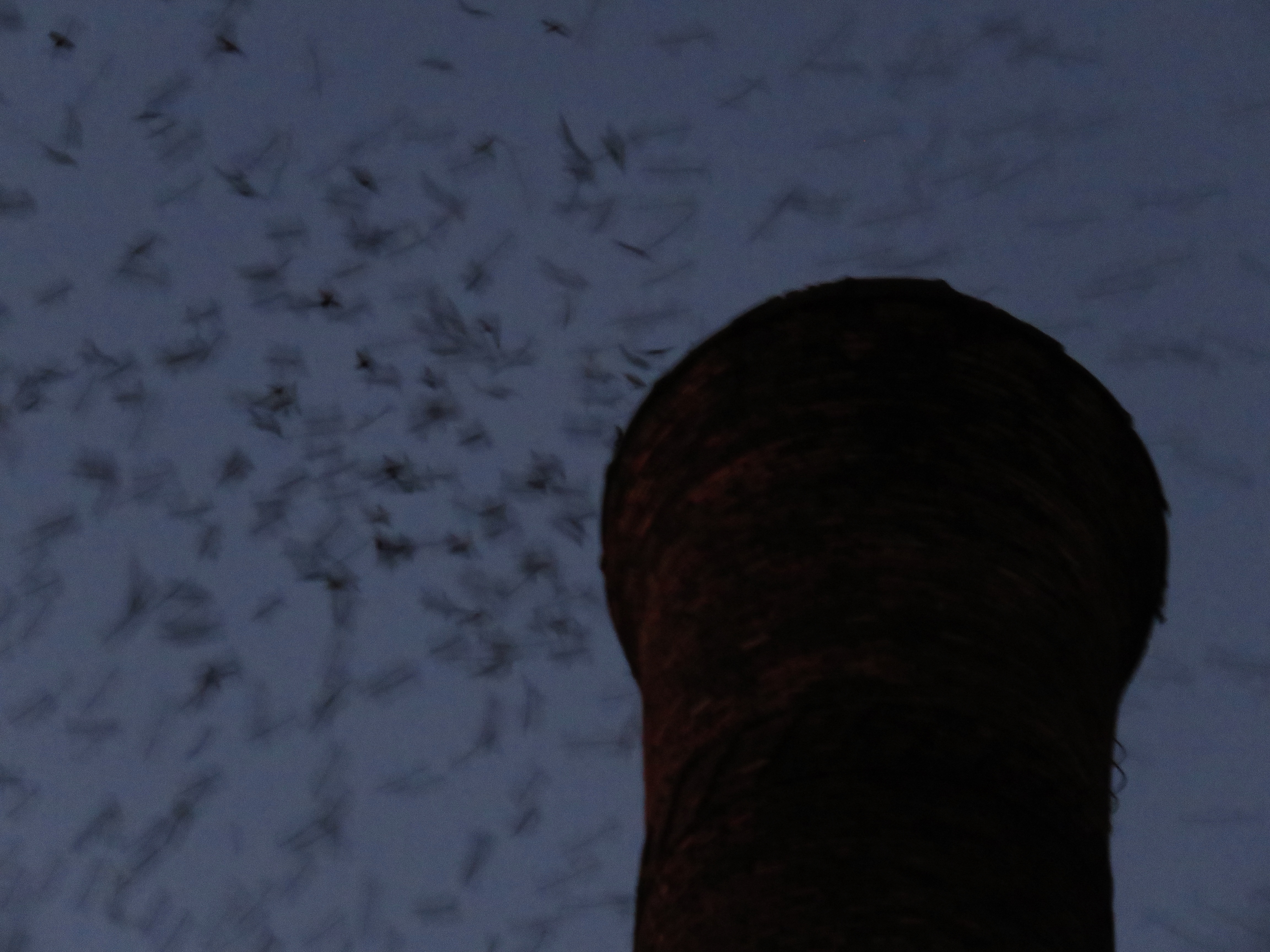 We wrapped up our chat and I went back to watching the swifts, now swirling above the top of the stack, with hundreds at a time disappearing as if they were being sucked up by the world’s largest vacuum cleaner. The book, Chimney Swifts: America’s Mysterious Birds Above The Fireplace states:

“Chimney Swifts are most noticeable during migration, when flocks numbering in the thousands circle in large tornado-like flocks above roosting chimneys at dusk, and then suddenly descend in ever-narrowing vortices into their depths to spend the night.”

That statement is not an exaggeration. 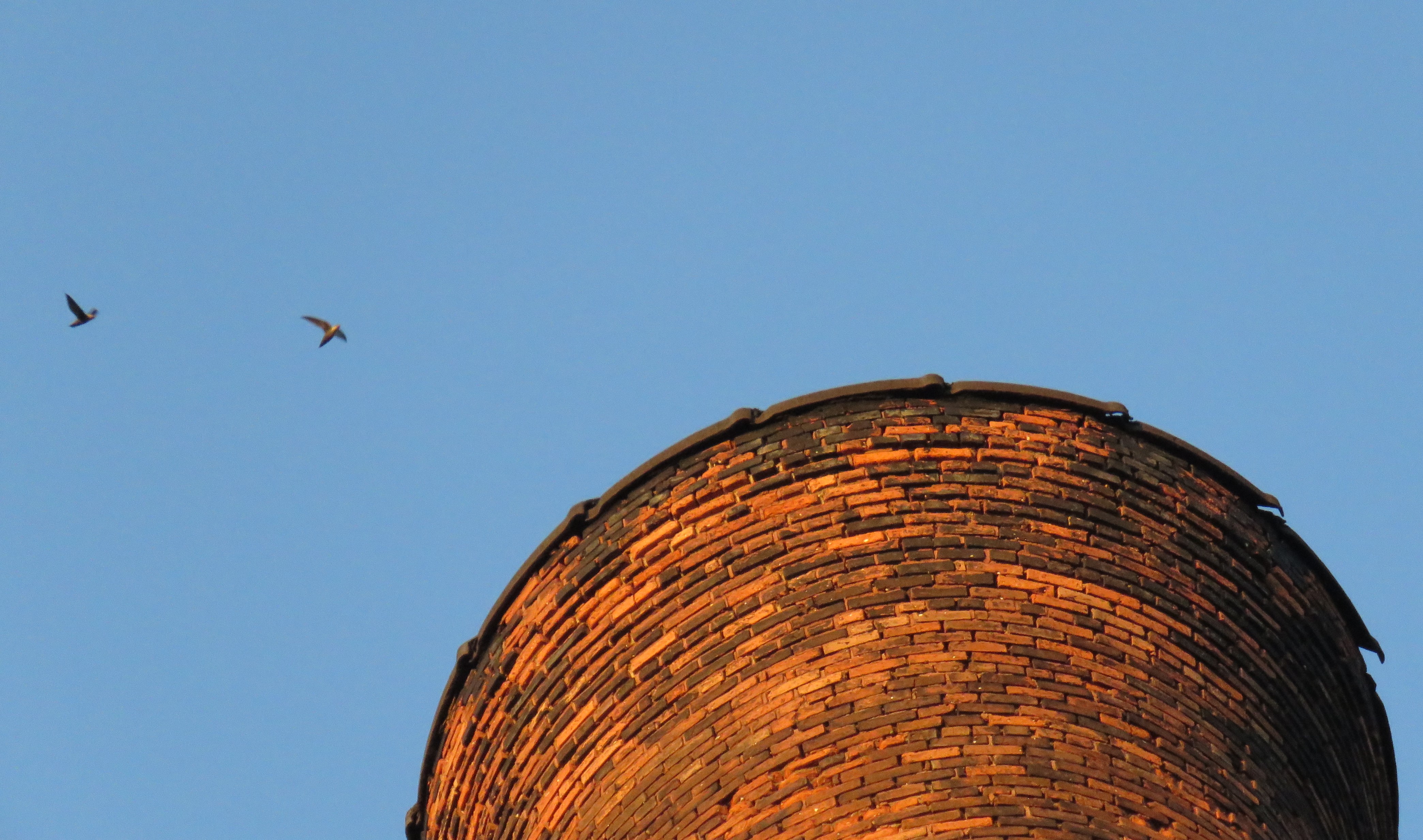 It is not easy to capture a photo of an individual chimney swift in flight but I did capture still images of some, like the one above, before the grand show began. After a bit of a technical struggle, I successfully filmed about thirty seconds of a small part of the still growing and swirling flock a few minutes before darkness prevented the capture of the entire flock descending into the chimney for a night’s rest. Watch and listen to it by clicking here. 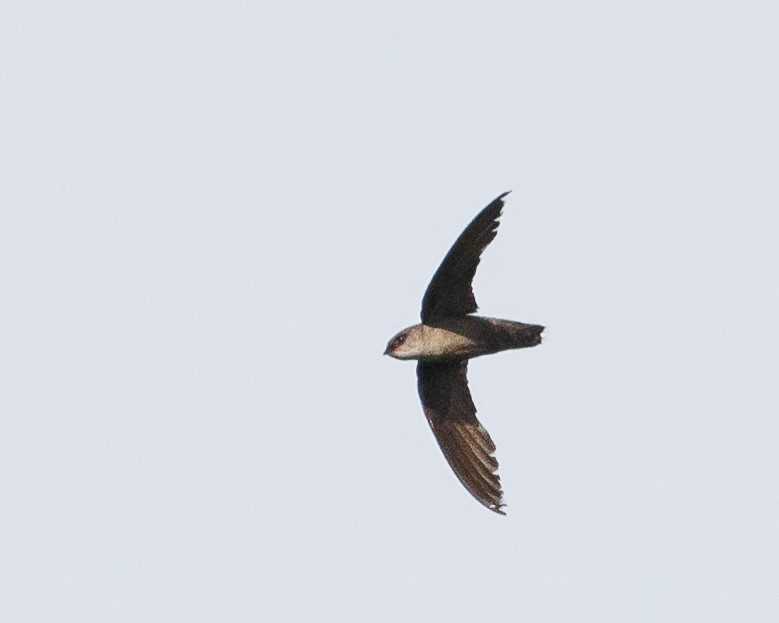 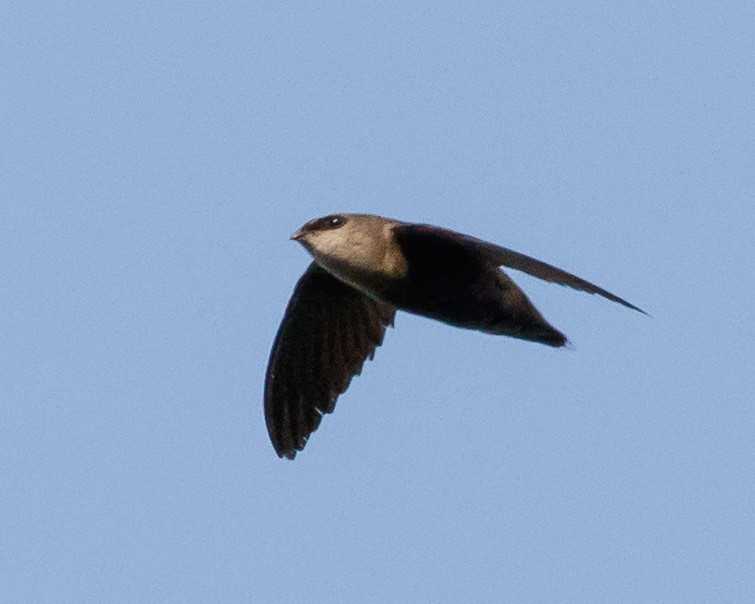 Giant flocks commonly roost together in large chimneys throughout the summer and at migration they use waystations such as the chimney in Farmington, often leading to the misconception that the birds are nesting as a colony. I held that misconception until last week when I chatted with Jac Kyle, the enthusiastic Program Coordinator with Detroit Audubon that spoke at the event and managed an information table. 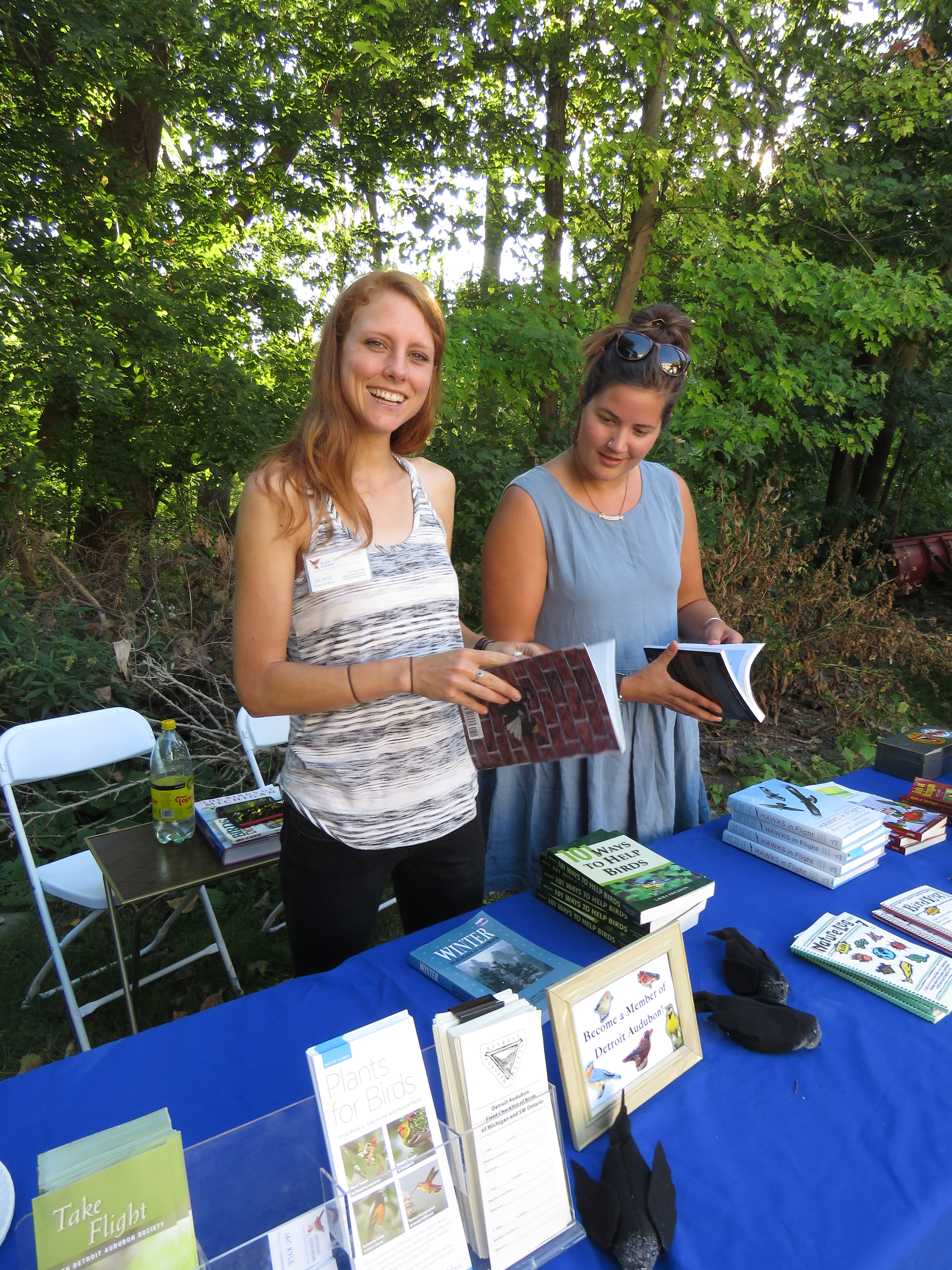 She said, “According to the Chimney Swift Conservation Association, two parents and their offspring can consume over 12,000 flying insects such as mosquitoes, gnats, termites and biting flies, every day.” She paused before adding, “Talk about a good neighbor!” 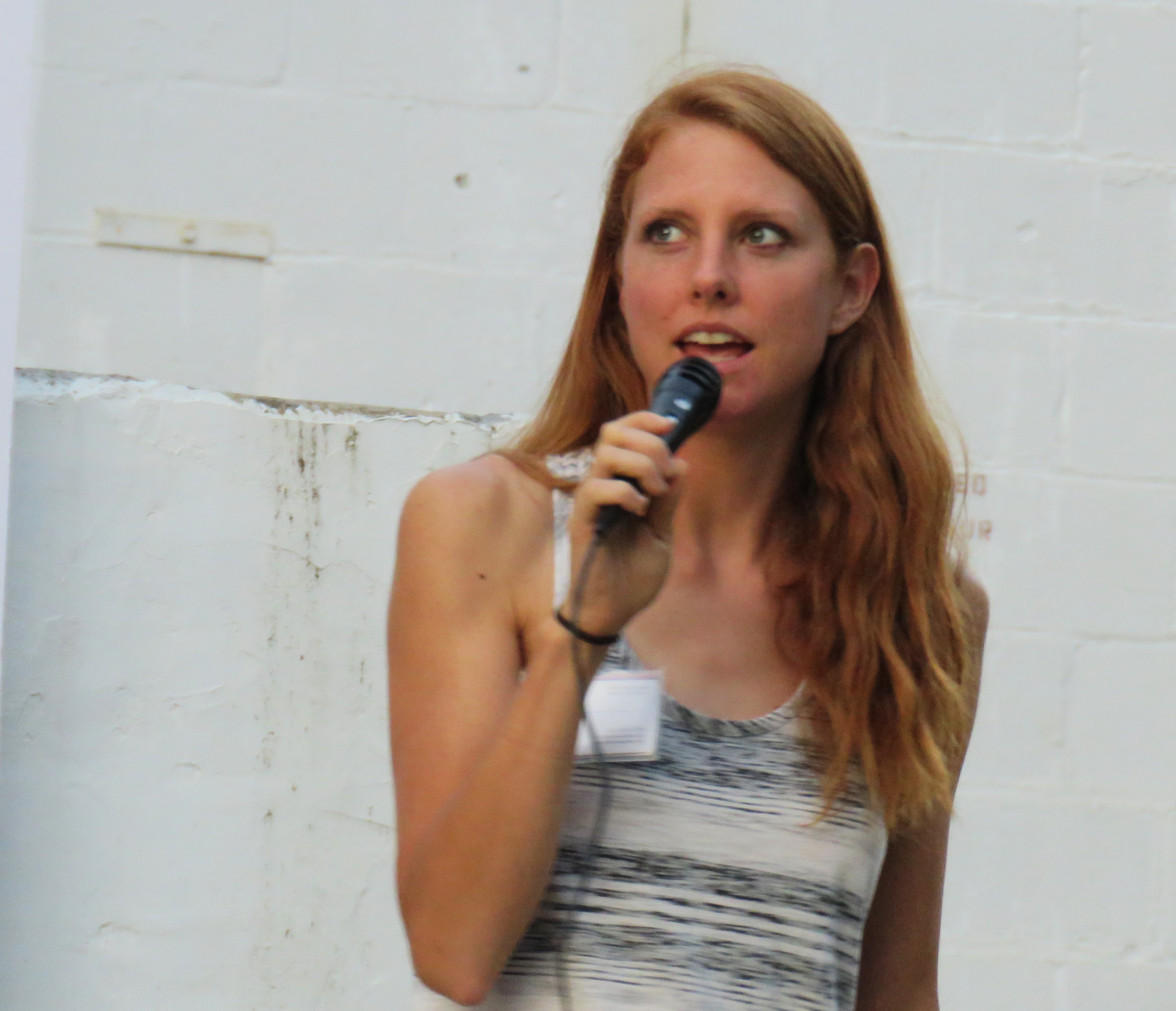 Chimney Swifts are on the decline and are protected by Federal law under the Migratory Bird Treaty Act. Kyle empathized that roost sites, such as large hollow trees and open masonry chimneys, are diminishing, but people can help out by being a responsible chimney owner. She explained that Chimney Swifts utilize residential chimney during the warmer months so typically there is no conflict. Owners of brick chimneys can take the cap off before spring and schedule chimney cleanings after the breeding season which typically wraps up by August in our region. Detroit Audubon has been funding a LiveCam (click to view) inside the historic chimney of the Swift Sanctuary so we can better understand the birds that utilize this structure. “Our hope is to raise awareness and ultimately funds that will preserve one of the largest roosting sites in North America.” she said. 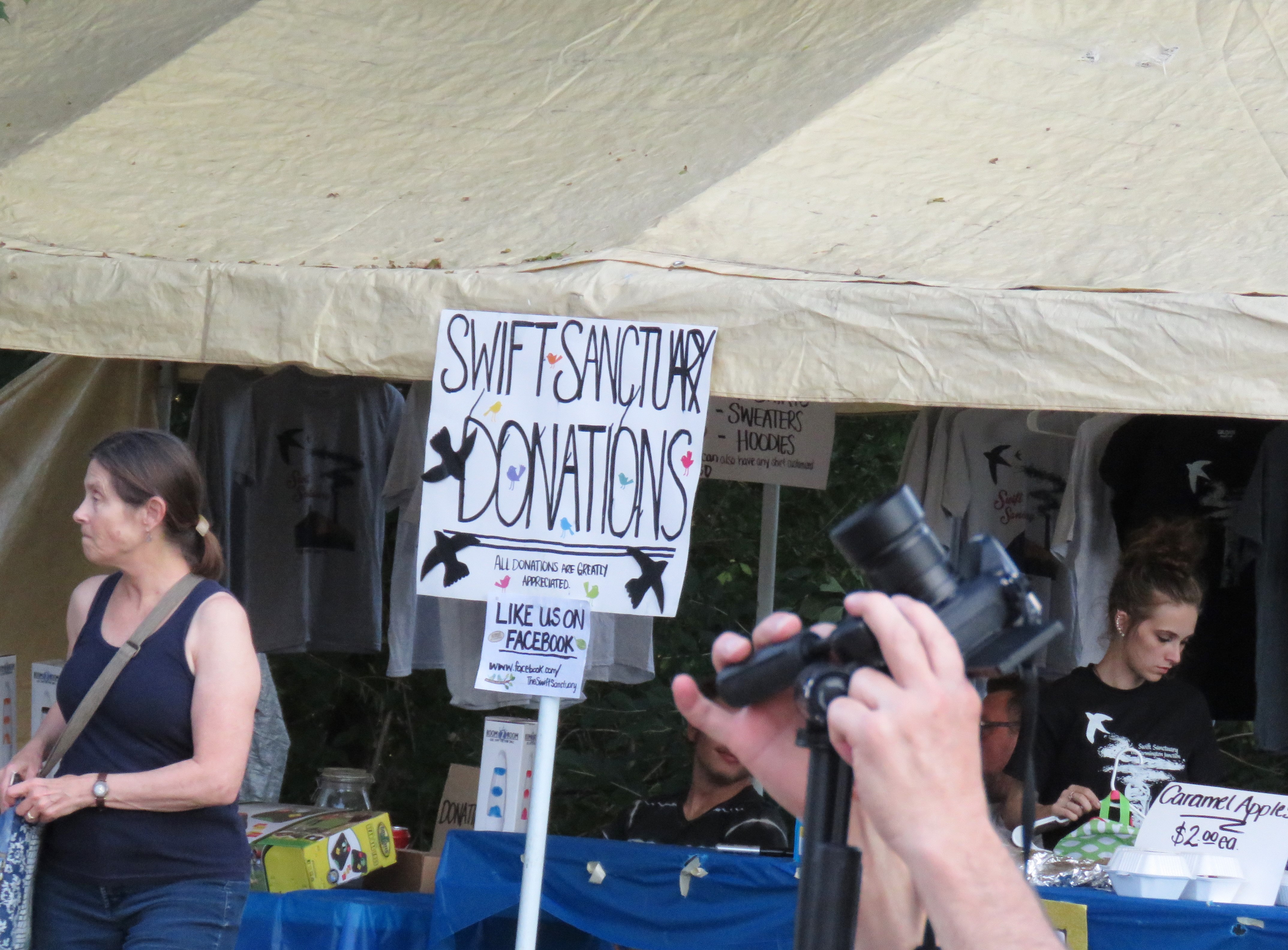 Chimney Swifts overwinter in the upper Amazon basin of Peru, Ecuador, Chile, and Brazil. When they return to their Michigan habitat in spring, pairs of bonded birds break away from the flock and build new nests in hollow trees, old buildings and of course in chimneys, sometimes confusing or delighting homeowners that hear chirping in their chimney. The nest is not the typical nest one thinks of, but is masterfully created for attachment to a chimney interior. It’s comprised of small twigs gathered not from the ground, but in flight that are then cemented to the interior wall of the chimney with the bird’s glue-like saliva.

If you miss this year’s event, don’t despair. The great gathering of swifts that use the Farmington chimney as a rest and refueling stop will repeat the show next year and David White said birders and nature lovers are still welcome to explore the site now, while it remains active. Jac Kyle added “We plan on continuing our Swift Night Outs, so if you missed it this year we hope to see you next September! We are currently seeking funding to reinvigorate Citizen Science efforts at Farmington Junction, and if you would be interested in getting involved you can visit www.detroitaudubon.org or email staff@detroitaudubon.org.” Perhaps now is the time to plan your own swift night out on the Wilder Side of Oakland County and then watch the sky for the return of these beautiful aerial acrobats next spring.

One thought on “A SWIFT NIGHT OUT: Flying Cigars over Farmington”

Leave a Reply to To Migrate or Not? That is the Question. – Oakland County Blog Cancel reply