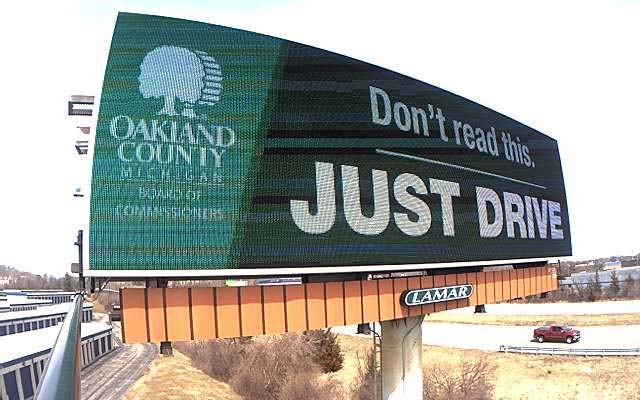 Did you see a billboard like this during the month of April while driving on I-75 in Oakland County? Since the Oakland County Board of Commissioners observed April as Distracted Driving Awareness Month, hopefully the answer is a resounding no.

Commissioner Eileen T. Kowall (District 6 – White Lake Township and a portion of Waterford Township) introduced the resolution establishing this important observation during the March 24, 2022, Board meeting. It was adopted unanimously and acknowledges the life-threatening impacts of distracted driving and encourages all motorists to commit to safe driving behaviors.

“Staying focused on driving is within all of our control. Although you may only take your eyes off the road for a second, maybe to read a text message or reach for a snack, that’s all it takes to make a choice with consequences that last forever. The effect of distracted driving isn’t only about how you are impacted, but how your decision impacts other drivers, pedestrians or road workers.“

Throughout the month of April, the Board’s goal was to reach as many people as possible with the message of prioritizing the act of driving above all else and leaving distractions in the rearview mirror. They executed a campaign that included billboards at four locations across the county for two full weeks during the month, digital signage on the Oakland County campus, newsletters and a collaborative social media push across several Oakland County department channels.

According to many traffic safety experts, there are three main types of distraction:

Kowall and Board staff worked with other staff in Oakland County to address all of these driving distractions with messaging that addressed snacking, texting, phone use, and attention being diverted by something outside the vehicle while driving.

The National Safety Council (NSC), which leads Distracted Driving Awareness Month nationally, estimates that in 2018, more than 2,800 people in the U.S. died in distraction-related crashes. At least seven people died per day, with an estimated 400,000 injured in motor vehicle crashes involving distracted drivers annually. The goal of the awareness campaign was to inform and educate with the hope of saving drivers, pedestrians and road workers from injury or death while also protecting personal property and vehicle damage.

According to AAA’s 2017 traffic safety culture index, 96.8 percent of respondents view drivers texting or emailing while driving as a serious threat, however 44.9 percent also reported that they had read a text message or email while driving within the last month of taking the survey. This comparison marks a difference between how drivers feel about distracted driving and their actions.

At the core of this contradiction is the multitasking myth: the idea that driving has become second nature and that it can easily be done while engaging in another activity without risk.

Activities like texting, emailing and talking on the phone are cognitive tasks, as is driving. Instead of processing two or more cognitive tasks at the same time, the human brain switches between them, meaning not one activity gets the full attention of the driver. In addition, texting while driving is against the law in Michigan. Drivers face a $100 fine for the first offense and $200 for subsequent ones.

What Drivers Can Do: Just Drive

Kowall encourages motorists to take the NSC’s safety pledge, regardless of the time of year. By agreeing to “Just Drive,” motorists promise to not have phone conversations, use voice-to-text features, use phone apps or contact other people when they are driving. And, leave the phone call, the text message, snacks, and other distractions for when the car is safely in park – during Distracted Driving Awareness Month and all year long.