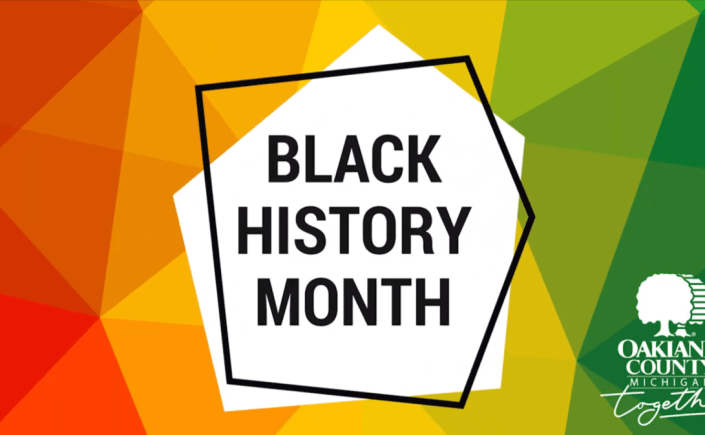 Black History Month is a time to reflect on the past and look ahead to the future. It’s also a time to share and learn about Black stories and history. This year, we highlighted the history of our county seat, Pontiac, which has a legacy of a strong pioneering Black community, dating back to the 1800’s.

Elizabeth Lisette Denison Forth, a formerly enslaved African, earned her freedom by escaping to Canada. She returned to the U.S. to start her new life as a free woman and gave back to her community by becoming a philanthropist and landowner. Notably, she is the first Black American to own property in Pontiac and Oakland County, portions of which are now part of Oak Hill Cemetery.

Throughout her life, she came to develop relationships with notable individuals, including Detroit’s first mayor, Solomon Sibley. When she died, she asked that her life savings be used to build a church so that people of all walks could worship together. Construction began a year after her death on St. James Episcopal Church in Grosse Ile.

Dr. Roy Van Cooley, Jr., a World War II veteran, family physician and public servant, held many leadership roles in the Pontiac community throughout his life. Born in Alabama in 1919, he moved to Michigan at a time when many Black Americans were still migrating to Northern states. Cooley, who served in the U.S. Army, earned his medical degree from the University of Michigan and practiced family medicine for over 50 years.

He served as a Pontiac City Commissioner and a member of the former Oakland County Board of Supervisors. He also held board positions or memberships with the Pontiac City Building Authority, Boys and Girls Club and Pontiac General Hospital. Cooley also fought to improve lives of Black residents in Pontiac as a member of the Neopolitan Club, a social organization formed in 1946. He was also a longtime member of the NAACP and the historic Newman African Methodist Episcopal Church.

In 2007, the City of Pontiac honored Cooley and five other local Black Americans for their activism during the city’s Civil Rights Era. His peers included people like Dr. Robert Turpin, Robert W. Bowens, Jr., Charles Tucker Jr., and Ellen B. Ferguson.

At the time of his death in 2010, Cooley’s name could be found on the cornerstones of the following Oakland County sites, according to his obituary: Pontiac Municipal Courthouse, Pontiac City Hall, Phoenix Center Parking Structure, Boys and Girls Club of Pontiac and the auditorium of the County Board of Supervisors.

Jazz drummer Elvin Jones, one of Pontiac’s most celebrated creatives, was born in 1927 in Oakland County. He grew up in the southwest section, a Black cultural and business hub of the city. His siblings included celebrated trumpeter, Thad Jones, and “The Dean of Jazz Pianists,” Hank Jones. He taught himself how to play drums at 13 while attending public school.

Jones served in the U.S. Army and played with a military band for three years. He returned to Michigan and spent time on Detroit’s jazz scene with his brothers, known as The Jones Boys, before moving to New York City in the 1950s. He was the first great post-bebop percussionist, and his fiery drums powered the John Coltrane Quartet, “the most influential and controversial jazz ensemble of the 1960s,” according to The New York Times.

After leaving Coltrane’s group, where he played on the classic album, A Love Supreme, he spent time with Duke Ellington’s big band. He went on to form his own trio and other groups, including The Elvin Jones Jazz Machine. His career includes time with famed musicians such as Charles Mingus, Miles Davis, McCoy Tyner, Wayne Shorter and Grant Green. He remained active through his senior years and died in 2004.

U.S. Representative Brenda Lawrence made history in Michigan when voters elected her mayor of Southfield in 2001. Her victory made her the city’s first woman and first Black mayor.

Born in 1954 in Detroit, Lawrence graduated from Pershing High School and went on to earn a Bachelor of Arts degree in Public Administration from Central Michigan University in 1976. She had a 30-year career with United States Postal Service before entering politics. Lawrence also sat on the Southfield Public Schools Board of Education where she held numerous roles, including president.

In 2015, after four mayoral terms in Southfield, Lawrence won her current role as a representative for Michigan’s Fourteenth Congressional District, which includes Oakland County’s seat, Pontiac. She is the only Black lawmaker representing Michigan in Congress.

Although Black History Month is almost over, that doesn’t mean the celebration has to end. Black History is more than one month. Let’s continue to honor, study, explore, and celebrate every day of the year.

It’s all of our responsibility to take what we’ve been given and the legacy that we’ve inherited and make sure that we continue the moral arc of the universe towards justice.

One thought on “Black History in Oakland County: Pontiac”