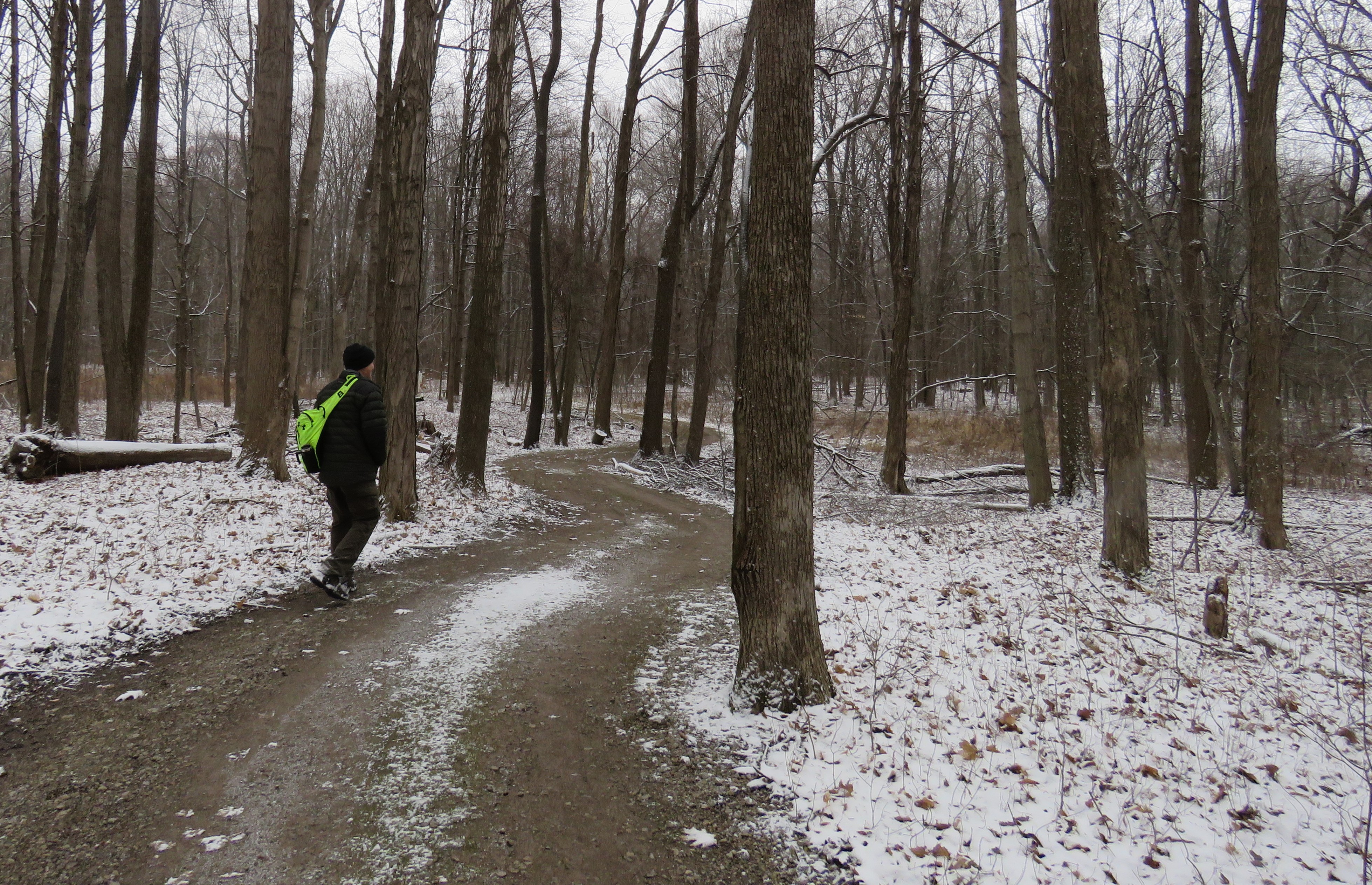 Lyon Oaks County Park is tucked away in Lyon Township in the far southwestern corner of Oakland County. It’s best known perhaps for its Arthur Hills-designed 18-hole golf course and a very popular 13-acre fenced dog park. The busy I-96 Freeway parallels the southern property line. An industrial park saddles up to a large section of its eastern perimeter, and a major underground natural gas pipeline bisects the park almost straight down the middle in a north-south orientation. With those thoughts in mind I decided to wrap up my weekly 2018 “wilder side” trail treks with a slow-paced 5.8 mile “discovery” meander at Lyon Oaks to see what secrets of nature would be exposed on a cold and heavily overcast end of December winter’s day, my first time at Lyon Oaks in over four years. 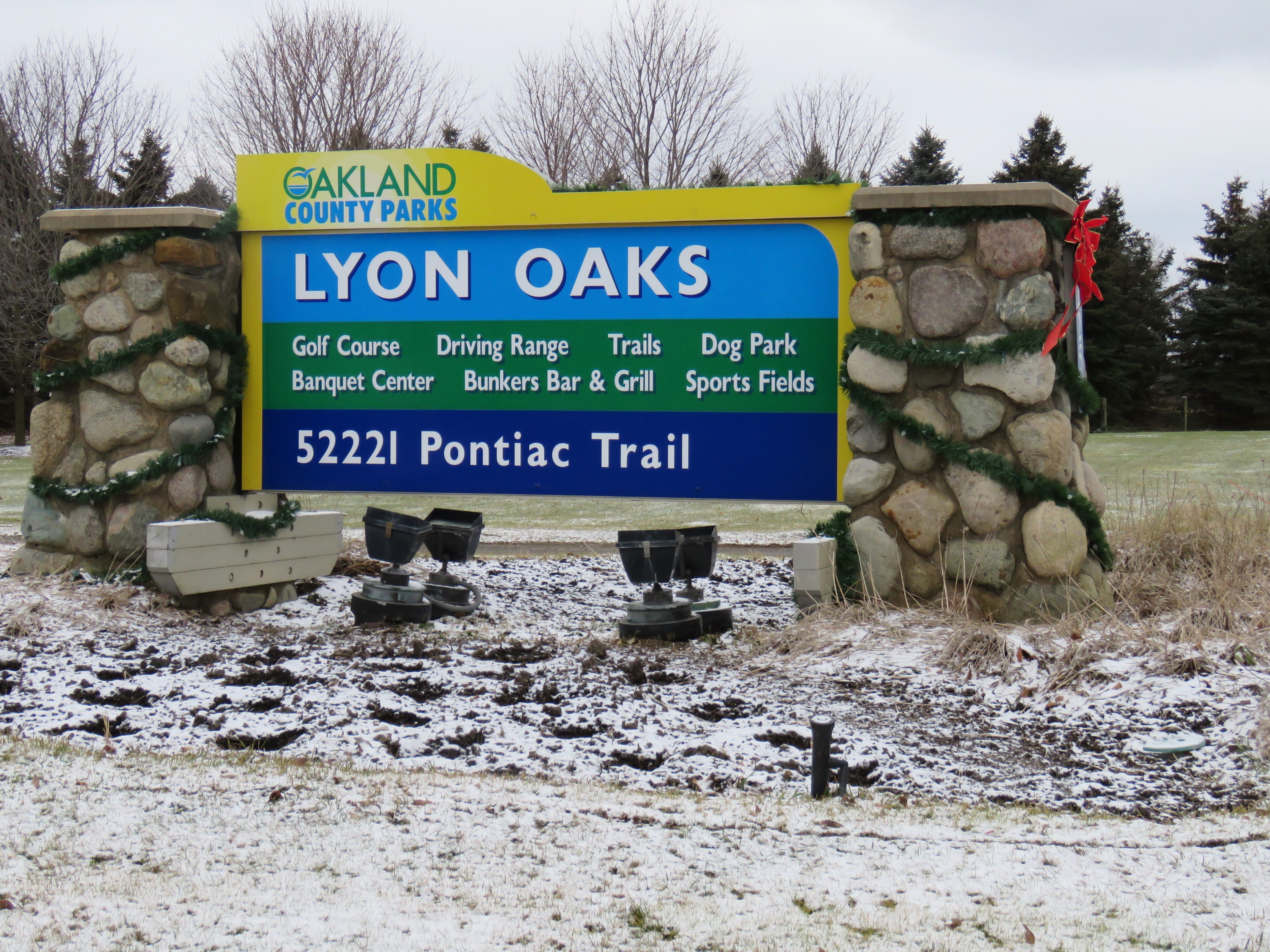 Does nature still find a way to thrive, or at least survive at Lyon Oaks? That’s what I set out to find in this mostly “flatland” 1,041-acre park that includes about 800 acres of wetlands and forested swamps.

My hiking companion and I started our trek at the parking lot adjacent to the trailhead, which also serves as a drop-off site for Christmas Tree Recycling. The map holder at the welcoming display panel only held two remaining copies of the trail map so I suggest hikers do what I did before heading out; print the online map. Five of the seven trails, all of which are interconnected, bear eye-catching wildlife names: Coyote Corridor, Heron Loop, Red-Tail Run, Fawn Loop and Turkey Loop. The only listed creatures that made an appearance for us during our trek, that followed wide trails and took us over wooden bridges and boardwalks, was a small flock of turkeys. They were scratching about the barely snow-covered leaves near the industrial park fence, perhaps searching for beech seeds or frozen grubs.

The Heron Loop trail name caught our attention, especially when the first trail junction we reached had a sign promoting the way to the rookery. That would be our first stop. We knew Great Blue Herons do not overwinter in the county but from experiences at other rookeries, I also knew that sometimes Great Horned Owls will take over an empty nest and “redesign” them during the winter. A stealthy approach with my camera at the ready brought us to the edge of the rookery and we saw a heron – a wooden one mounted on a pole.

A casual glance at the rookery hinted it had long been abandoned. There were no signs of any old nests anywhere. A colorful interpretive sign near the wooden heron shared part of the story: It was a man-made rookery designed to lure great blue herons that once nested in the trees of the wooded wetlands. Intrigued by the absence of any evidence of Great Blue Herons nesting there, I did some follow-up research and discovered this from published background literature:

“Based on verbal histories of Spencer family members, who have owned much of the park property since 1857, a nesting colony – rookery – of great blue herons has existed in Lyon Oaks for at least 75 years prior to the early 1990s. In 1988, 257 heron nests were reported. During the 1990s the rookery dissipated, which is not uncommon when nesting trees fall. This man-made rookery is an effort to bring nesting herons back using utility poles with pre-fab nesting platforms. Less likely to fall than trees, they can be placed where needed. Also, predator guards can be easily installed. DTE Energy graciously donated the poles, labor, and equipment to install this rookery, the first of its kind in Michigan. It will serve as a model for other heron restoration efforts.” 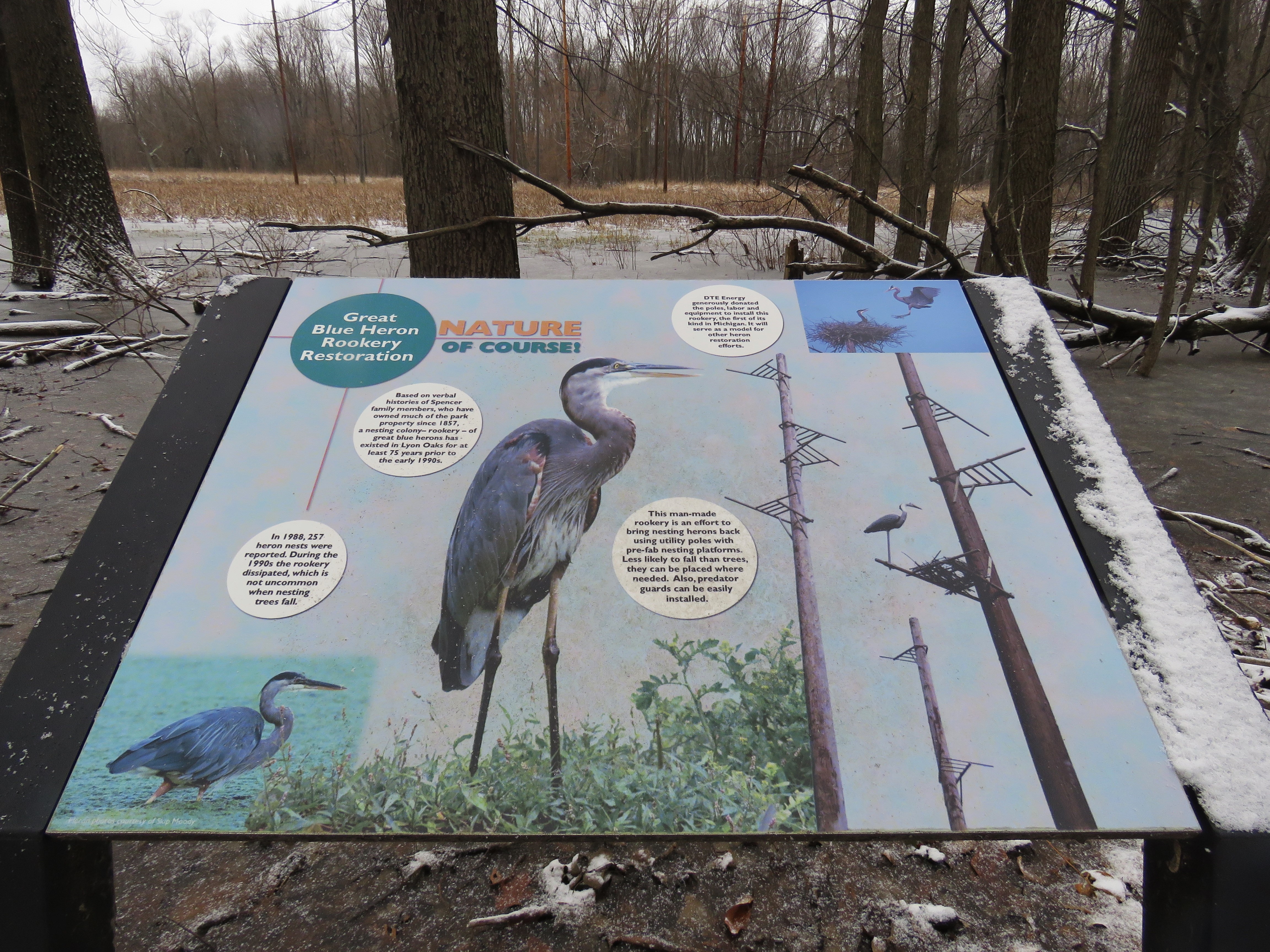 Nature’s way, however, does not always agree with human whims, wishes and plans – in this case, a well-thought out scientific experiment by Oakland County Parks, that I would have supported, to lure herons back to a site they abandoned as natural trees fell. Unfortunately, the experiment failed, the herons never returned. I may return in the spring to see what creatures now live at the rookery site and immediately adjacent uplands, perhaps including Wood Ducks, Blanding’s turtles and even a residual population of Eastern Massasauga Rattlesnakes. I am certain the marshy edges of the rookery site will erupt in frog symphonies in the early days of spring, and without a doubt, many of the downed trees provide over-wintering sites for salamanders. And even now, during the early days of January, I suspect raccoons and perhaps red foxes explore the wetland’s edge zone in search of meaty morsels. 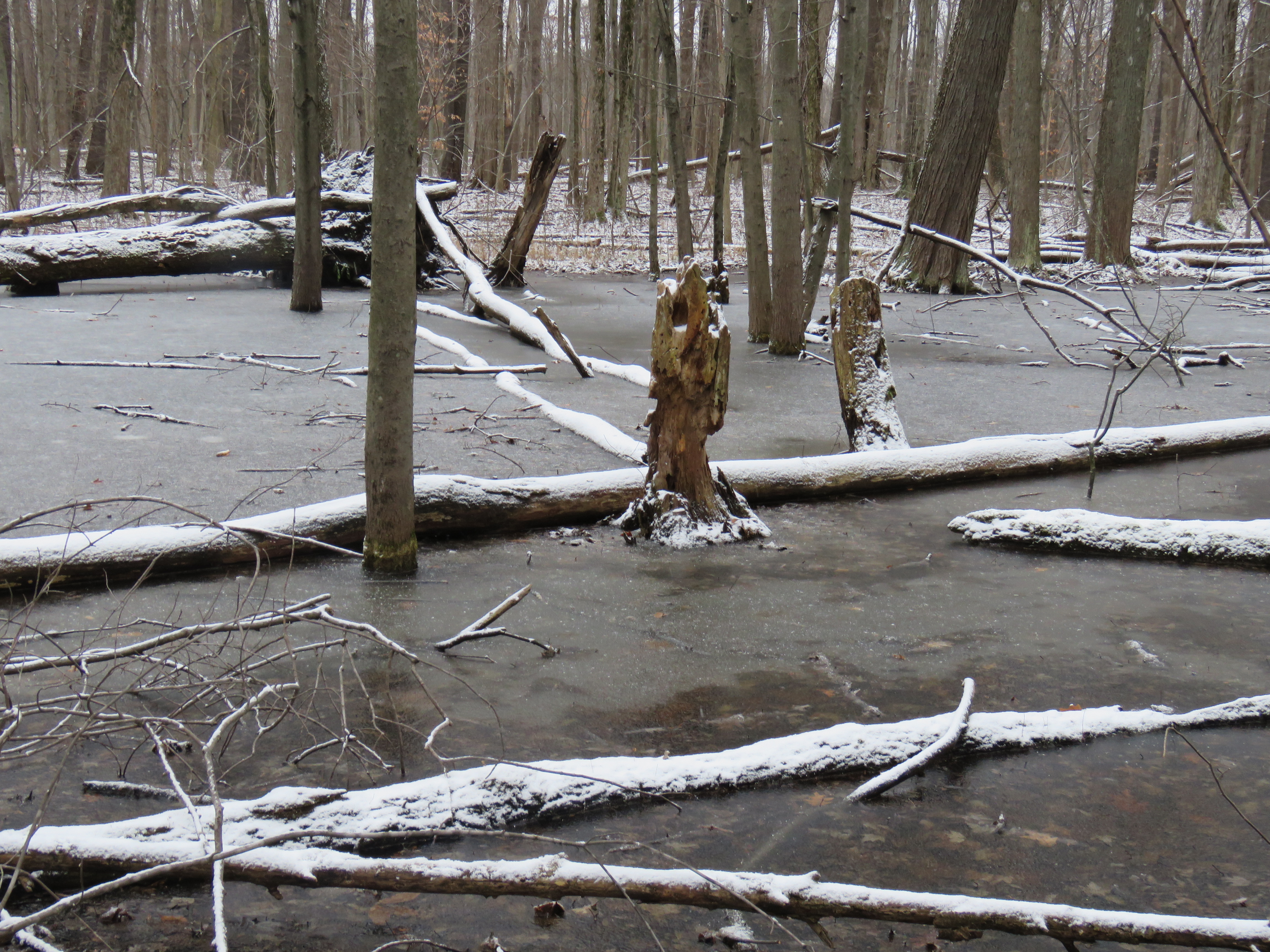 We meandered on for a few more hours – almost at a snail’s pace – admiring various aspects of nature’s way that are often overlooked on gray days, including frosted fungi, icy streams, bright green moss and puffballs on tree trunks, the rough bark of black cherry trees, vernal ponds, and much to my surprise, the still flowering brilliant yellow spider-like blossoms of witch hazel trees.

Nature also shared dramatic clues as to the landscape’s past usage, including farming. Enormous grapevines could be seen from the trail in several locations, including one that seemed to be embracing the smooth bark of a beech tree. But the grapevine that really caught our attention was one that had no tree support and had formed a nearly perfect enormous woodland heart, a great spot for a photo shoot.

As we looped back along the mile long “Coyote Corridor” that embraced the edge of restored prairie habitat, I thought to myself, “if I was a coyote, that would be a perfect habitat for nocturnal rabbit and mouse hunting, and a good place for deer to bed down in the day.” The dried seed heads of many of the native prairie flowers were laced with snow and I imagined the bold colors the prairie presented in late summer would be spectacular. Old bluebird houses amidst the sea of tall big bluestem grasses stood ready for their prairie arrival in spring.

Some discoveries we made were expected, and some were not. The biggest surprise of all for our entire trek as we followed the official pathways, and at times the trail of the wind that rustled tree tops, was that we encountered no other two-legged creatures, with the exception of that flock of turkeys in their hidden away habitat on the wilder side of Oakland County. For detailed information on all 13 parks managed by Oakland County Parks and Recreation, including park maps, trails, special events and 2019 permits, visit their website. 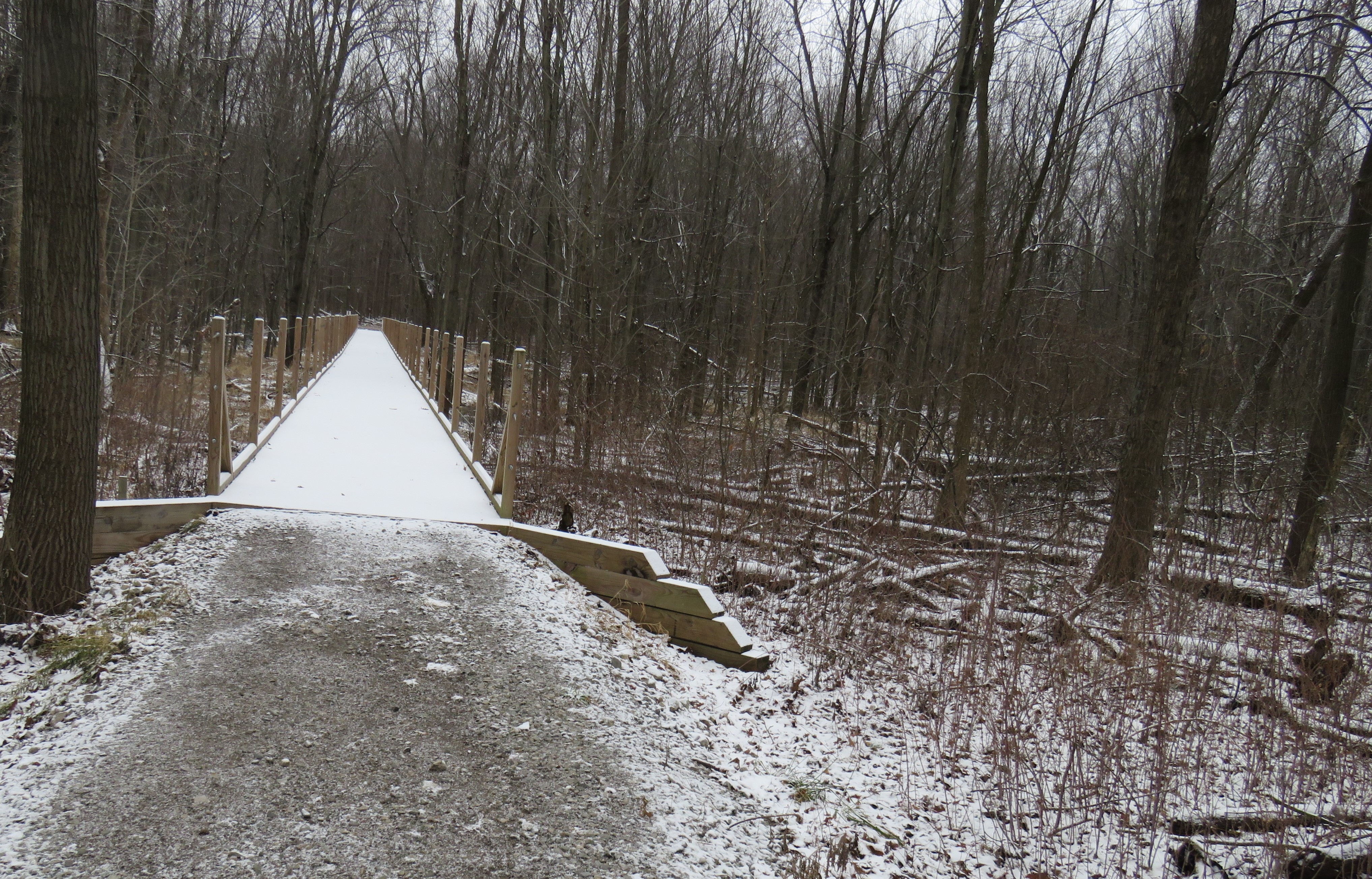 2 thoughts on “Wandering Lyon Oaks on a Winter’s Day”