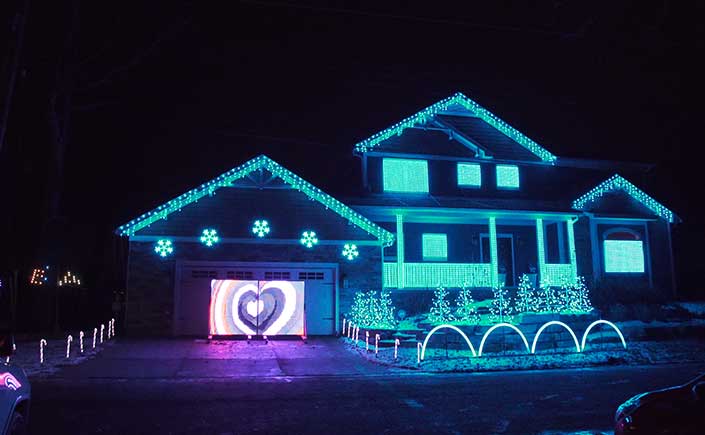 Lights on the Lake in Lake Orion is a must-see light and sound display, with over 14,000 pixels synchronized to music and two different shows that run on alternating days. Head to 439 Shady Oaks to see it in person while you listen to the broadcast on 93.1 FM.

Check out our video for a preview before you go and learn what inspired Rob and Lindsey-Anne Gawthrop to create a holiday wonderland using pixels. Each individual pixel can be controlled to show any color, making all kinds of patterns possible. The show runs: Sunday–Thursday from 5:30 p.m. to 10:00 p.m. and Friday–Saturday from 5:30 p.m. to 11:00 p.m.

Each pixel of Lights on Lake moves in time to several songs, like Let it Go from the Disney movie Frozen and Santa Shark, a holiday version of the popular Baby Shark song. Each song takes about eight to ten hours to program. The whole set up and tear down require a full day’s work each, but it takes several hours to design and put new elements together.

New this year is a pixel matrix on their garage made up of 8,500 pixels that are tightly spaced. It’s like a large outdoor television that shows videos. In addition to new songs that have been added, a scene from the movie Frozen is depicted on the matrix.

Last year, the Gawthrops decided to make their show a charitable one. They selected The Daisy Project Michigan because they wanted to support a local organization that involved kids. They spoke with their township supervisor for suggestions of local charities and were touched when they learned about the efforts of The Daisy Project, an organization that helps to enrich the lives of special needs families. Last year, they raised almost $1500 for The Daisy Project “Let Them Play” playground, an all-inclusive playground at Friendship Park for children that are wheelchair bound.

This year, 100% of Lights on the Lake donations will go toward The Daisy Project and Easter Seals Michigan Miracle League of North Oakland Field that’s being built at Friendship Park. The field will allow wheelchair bound children and adults to play baseball. The Gawthrops plan to match $500 in donations this year.

The holiday light and music display first began in 2015 when the Gawthrop’s daughter was born. With an infant, they weren’t able to go out much, but they did make it out to see Our Dancing Lights in Auburn Hills. Rob was impressed by the display, which inspired him to get involved with lighting. Together, the couple started using LED lights on props like hand-made light balls and trees, and the next year they moved on to pixels.

Lights on the Lake was featured on the Oakland County Holiday Lights Map last year, and again this year. The Gawthrops shared that the exposure has benefited them by getting more people out to see their display and generating more donations for The Daisy Project.

Go and See “Lights on the Lake”

Lights on the Lake hopes to impact visitors by making them happy and helping them to feel the spirit of the holiday season.

Please enter from Pine Tree Road turning on Dollar Bay Drive, then turn right on Shady Oaks. If there are cars in the parking area, stay to the right along the fence and you will be able to see the show while waiting for traffic to clear.

Get updates and learn more about Lights on the Lake by following along with them on Facebook.