If your life feels like it’s becoming too fast-paced and distracted, perhaps it’s time to relax and refresh with an early spring nature embracing hike. The 5,900 acres of Highland State Recreation Area (HSRA), nestled away on the south side of M-59 in Highland and White Lake Township, might just be what the doctor ordered, and no prescription is needed. Find a hilly trail – that won’t be hard to do there – then walk slowly, stop often, be attentive to the sounds and your trail surroundings, and then the ways and wonders of nature will come alive. Such was the case last Sunday morning when I tagged along with the Crossroads Group of Sierra Club as they set out for a two-hour meander over and around the glacial features that dominate the park’s alluring landscape.

The Sierra adventurers and I met at the parking area adjacent to the old Edsel Ford Barn, a magnificent 15,000 square foot structure that was built in the early 1930s, but was severely damaged in a 2008 windstorm. Restoration work continues, thanks in part to the dedication and work of the Friends of Highland Recreation Area (FOHRA). A brief note on the history of the area is in order, for many hikers and visitors that come to Highland are unaware of the human history of the land, especially in the Haven Hills Natural Area section of the HSRA. Edsel Ford, the son of Henry Ford, began purchased hilly property with lakes in northwest Oakland County in 1923 and later built an estate on the land in the section of HSRA known today as Haven Hill. Local history buffs are proud of the fact that in 1976 Haven Hill was registered as a National Natural Landmark by the National Park Service. Before the morning was over I realized the combination of natural and human history makes Haven Hill and the rest of the HSRA one of the most exciting, yet for many, lesser known destinations on the Wilder Side of Oakland County.

After a brief discussion of possible routes, I opted to trek with those that wanted to hike the 5 mile Green Loop in the northeastern section of this expansive state recreation area. There are almost 18 miles of hiking trails, 15 miles of equestrian trails available to hike, and some trails designated for mountain bikers. Good etiquette when trekking on equestrian trails is important. The Michigan Trails and Greenways Alliance wrote, “As the largest, slowest-to-maneuver and (usually) least-predictable creatures on the trail, horses get the right of way from both hikers and mountain bikers. If you’re sharing the trail with equestrians, give them as wide a berth as possible and make sure not to make abrupt movements as they pass and talk calmly when approaching to avoid startling the animal.”

Our hike got underway under a crystal blue sky with the temperature still hovering at the freezing mark, the perfect backdrop for a Sandhill Crane low flyby. We heard it before we saw it, for its loud rattling call is unmistakable. Our route took us along the shoreline of a still mostly frozen kettle lake. It was there that I had the pleasure of watching a pair of mallard ducks as they came in for a steep and rather hard landing in a small pocket of open water before scrambling and slipping back onto the ice. Kettles lakes were created as the last sheet of glacial ice retreated some 11,000 years ago and great blocks of ice broke off and sank into the glacial till. As the partially buried ice blocks melted, small basins referred to as kettles were formed. Those that filled with water are known today as kettle lakes. 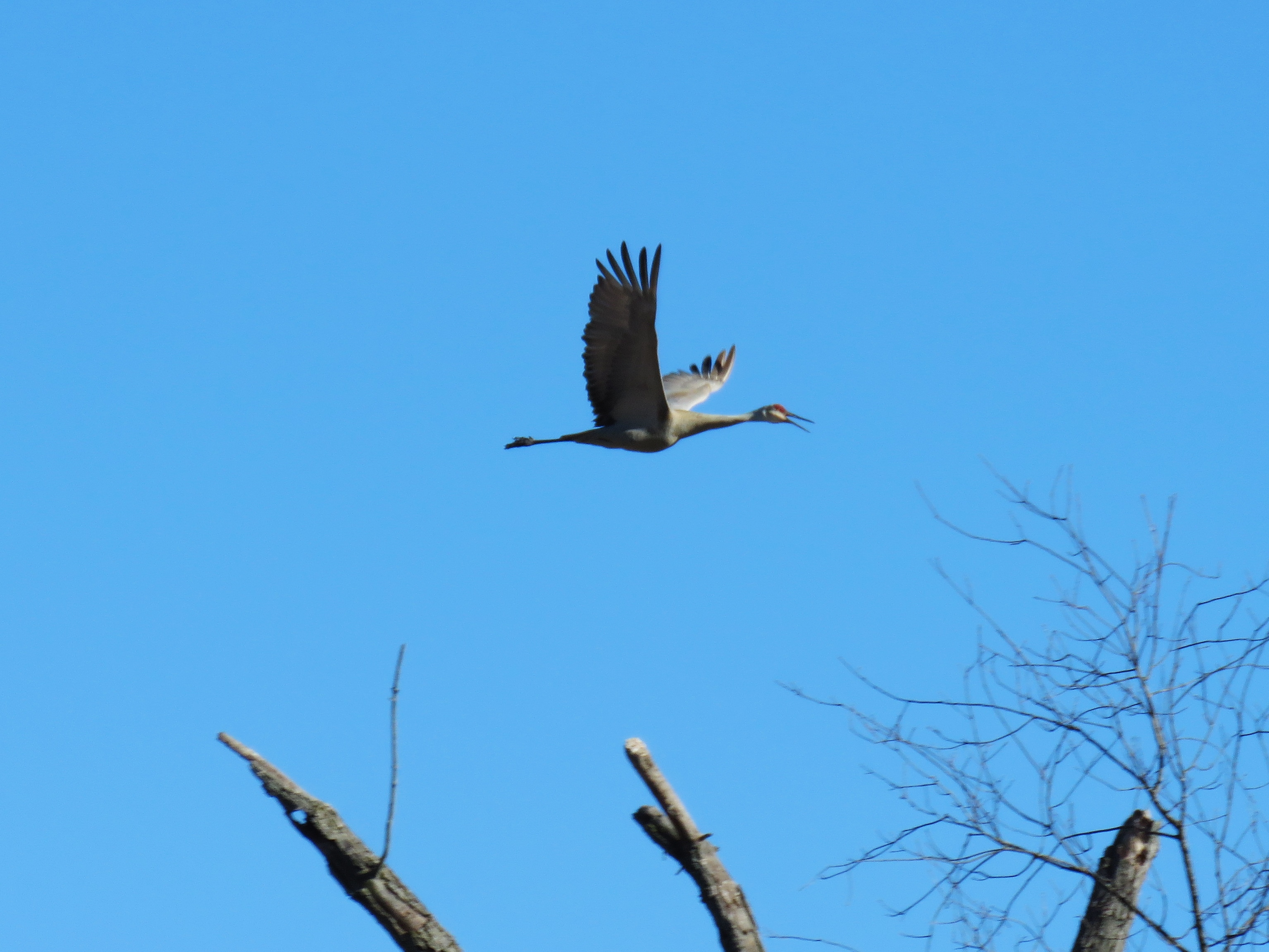 The Green Trail also passed by numerous vernal ponds, seasonal waters that are perfect breeding grounds for salamanders. The rains and warmth from earlier this week have in all likelihood accelerated the annual salamander migration from under decaying logs where they overwintered, to the vernal ponds, perfect places for breeding. The seasonal nature of these very shallow waters keeps them free of fish increasing the chances of survival for the next generation of salamanders.

Hiking with the Sierra Club is not a fast-paced adventure; but it was, in fact, a pleasurable combination of casual nature appreciation, fellowship, and a ceaseless quest for knowledge on nature’s way. Some of my trail companions wore heavy backpacks – as did I – to get leg muscles in shape for future more rugged adventures, while others even paused for yoga maneuvers in sun-soaked sections of trail. Everyone seemed impressed by the numerous large beech trees that towered over the trails and massive oaks with large outstretched gnarly branches. Smaller trees also drew the attention of our group, including blue beech, a small tree with a smooth bluish-gray bark that takes on the appearance of a flexed muscle, leading to one of its other common names, musclewood. One of the blue beech trees that grew adjacent to the trail slowed down the group as many of the hikers stopped to feel the unusual bark.

One of the nicest features of the well-marked trail was the small wooded boardwalks that crossed tiny creeks and wetlands. As we walked through the wetland areas we chatted a bit about the ‘highlands.’ I discovered that one of the highest areas of Highland bears the name ‘mountain.’  Mount Kanzer (1,150 feet above sea level) is, in reality, the high point of glacial moraine located west of Duck Lake Road, a north-south road that bisects the park. Those glacial moraine ‘high-lands’ were the source for the name Highland Recreation Area. As we trekked along, members of the Sierra Club enriched me with the fact that the ‘Highlands’ were popular daily destinations for families that grew up in the area and fished in many of the lakes, including Haven Hill Lake and Lower Pettibone Lake on the west side, and Teeple Lake on the east side.

The final duel between the seasons was exposed dramatically in the trail sections heading east-west. Some north-facing slopes still held two to four inches of snow, while the south-facing slopes were bare and dry enough for a wildfire if there had been an ignition source. Those in tune with nature’s way realized the south-facing slopes receive more direct sunlight and snow will melt faster, soil moisture will evaporate faster and woodland wildflowers appear sooner; while just yards away-the north slopes of the steep ravines of HSRA still embraced winter.

By noon the woods were alive with the song of Black Capped Chickadees and the distant chatter of a Pileated Woodpecker. Having arrived on site at 8:30am for an early exploration, I jumped at the chance to join Lee Burton, the Chair of the Crossroads Group of Sierra, and few other hikers for lunch for a wrap-up discussion. Burton explained, “The Crossroads Group of the Sierra Club represents over 1200 members in Livingston County and western Oakland County. We offer a variety of outings all year-long and several informative and interesting programs which are all open to the general public.”

A quote I long ago committed to memory from Gary Snyder’s 1988 book, The Sacred Earth – Writer on Nature & Spirit, came to mind as I drove home, a quote that was perfect for wrapping up the adventure at HSRA: “The wild requires that we learn the terrain, nod to all the animals and birds, ford the streams and cross the ridges, and tell a good story when we get back home.”

For more information on the HSRA, visit MDNR.