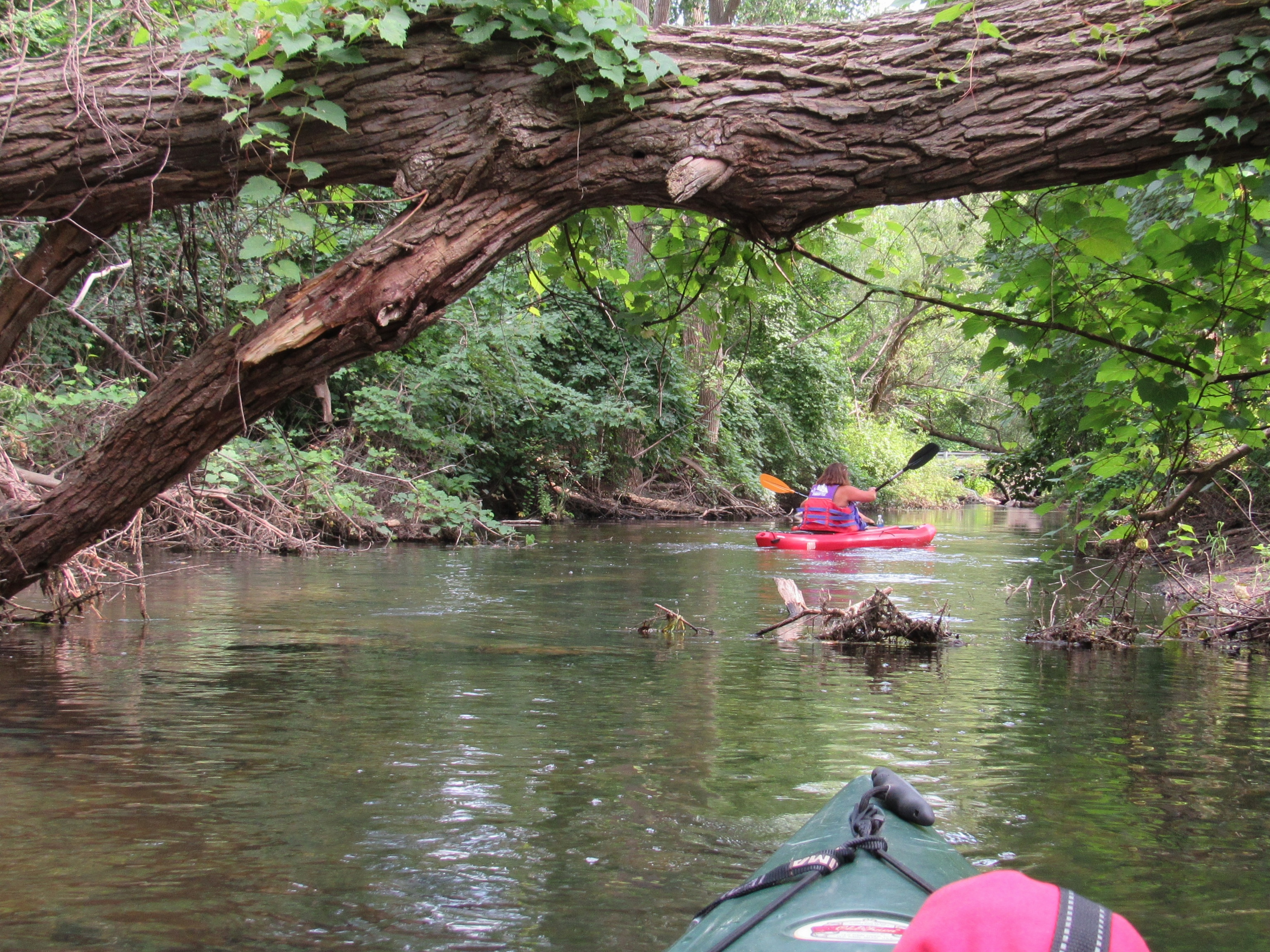 The mission of the Six Rivers Land Conservancy is to “Conserve, sustain, and connect natural areas, lands and waters that make the place we live special.” Combine those two sentences and then it’s time get ready for sultry summer days and crisp fall adventures on the wilder side of Oakland County. 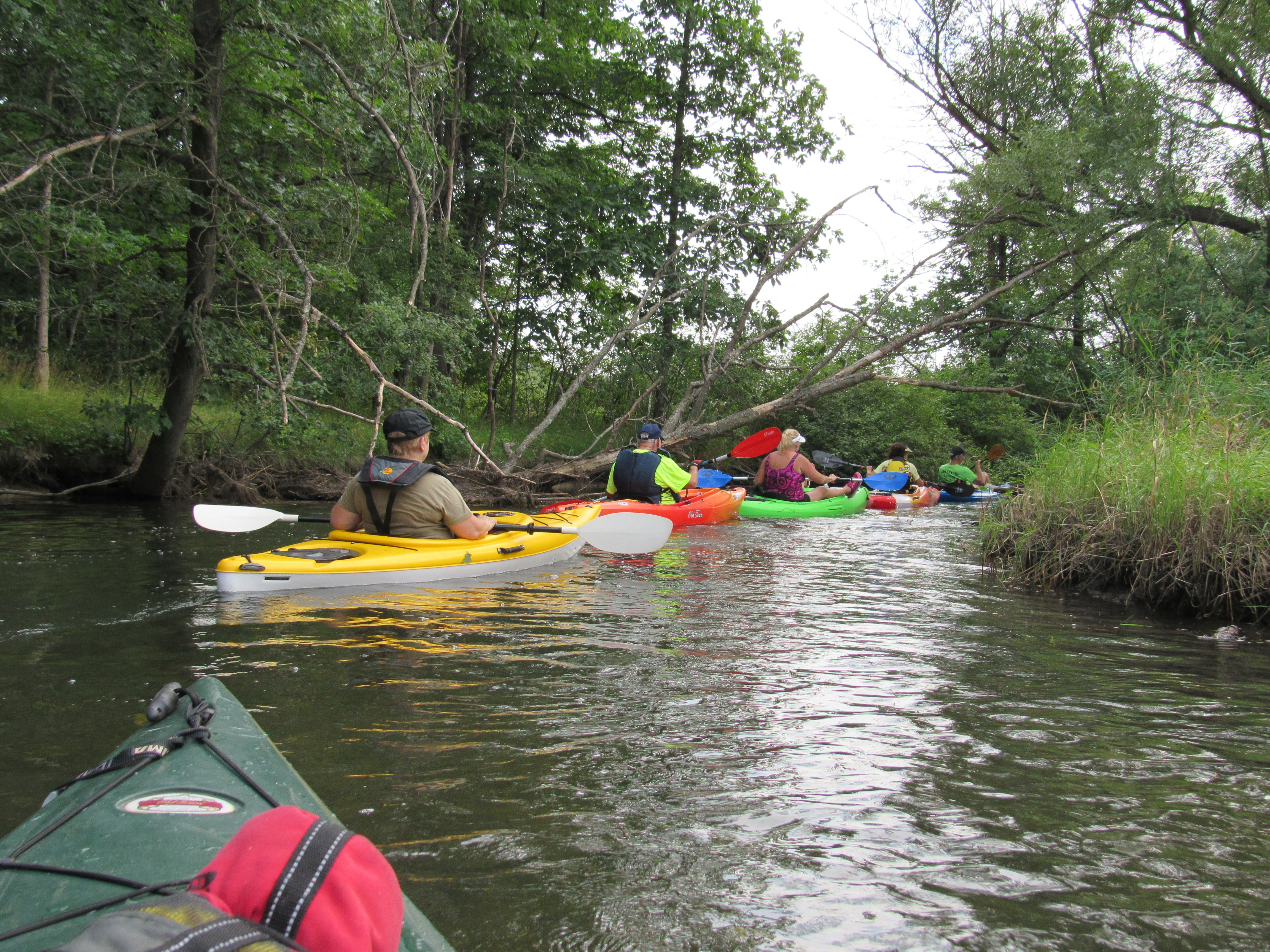 The spirit of wildness can be found even on a river that flows through a highly urbanized section of Oakland County. Last Wednesday evening I paddled with 14 participants from the Six Rivers Land Conservancy Adventure League. We were on a segment of the Clinton River that runs through Waterford Township, a shallow meandering section once best known by winged, web-footed paddlers. We launched from the edge of a Buffalo Wild Wings parking lot. Leaving behind one person to watch our kayaks, we shuttled our vehicles downriver to our take point at the Wonton Plaza strip-mall. Thirty minutes later, our urban paddling adventure was underway. 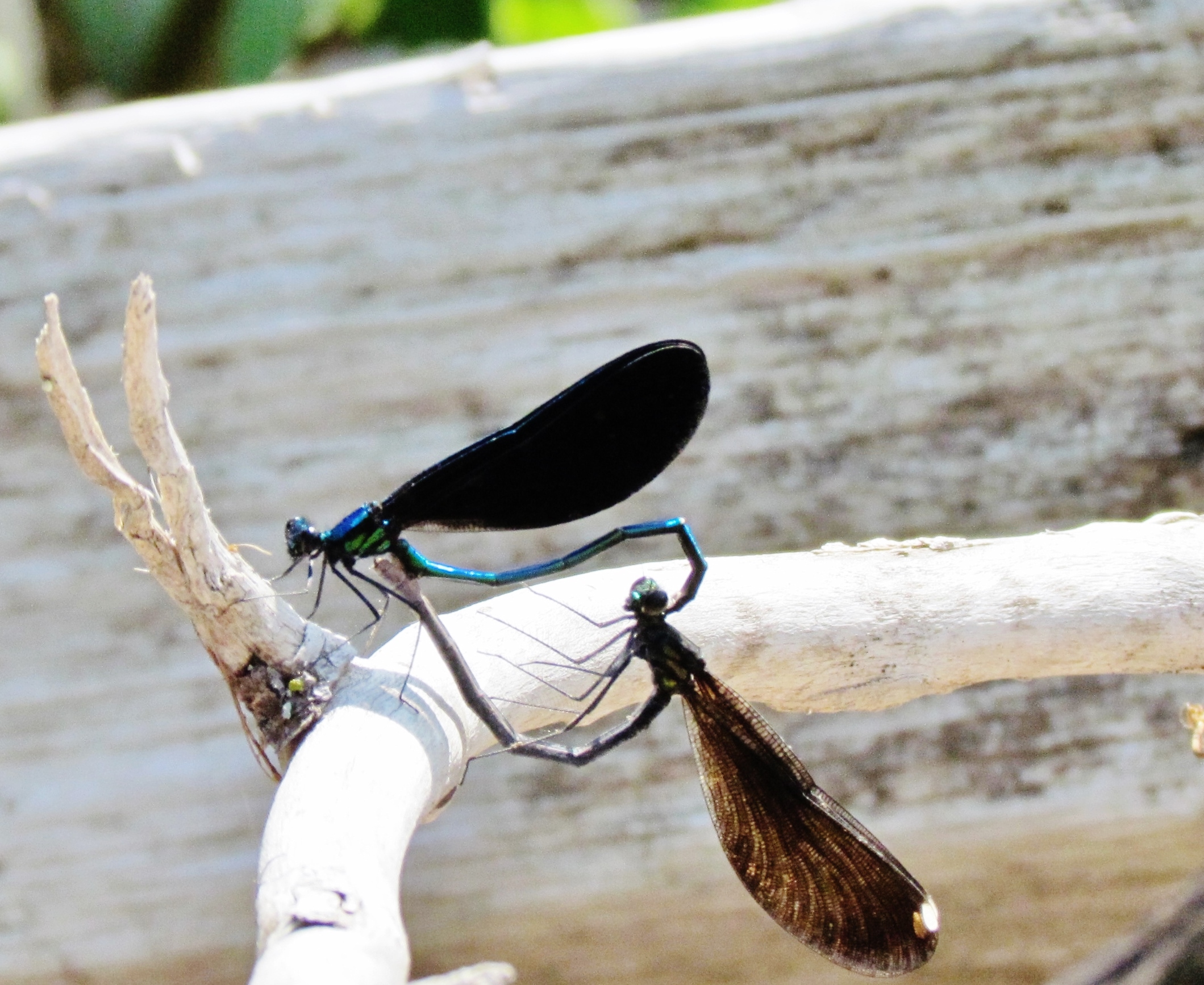 The words placid, tranquil, and quiet are not words I normally associate with the bustle, noise, and urban hustle of Waterford Township, but on the river a new world emerged. Though not a wilderness, a healthy degree of wildness thrived along the river banks. After skirting around our first obstacle in the river, a tangle of kayak-grabbing branches held in place by a partially submerged log, I switched into nature-observer mode. Within the first ten minutes, I noted deer tracks on the muddy banks, painted turtles trying to catch some of the sun’s warmth under the cloudy sky, and a swimming muskrat. A few seconds after the muskrat encounter, a beaver-gnawed branch drifted by. The shoreline trees and shrubs were alive with songbirds, and clumps of swamp milkweed attracted butterflies. 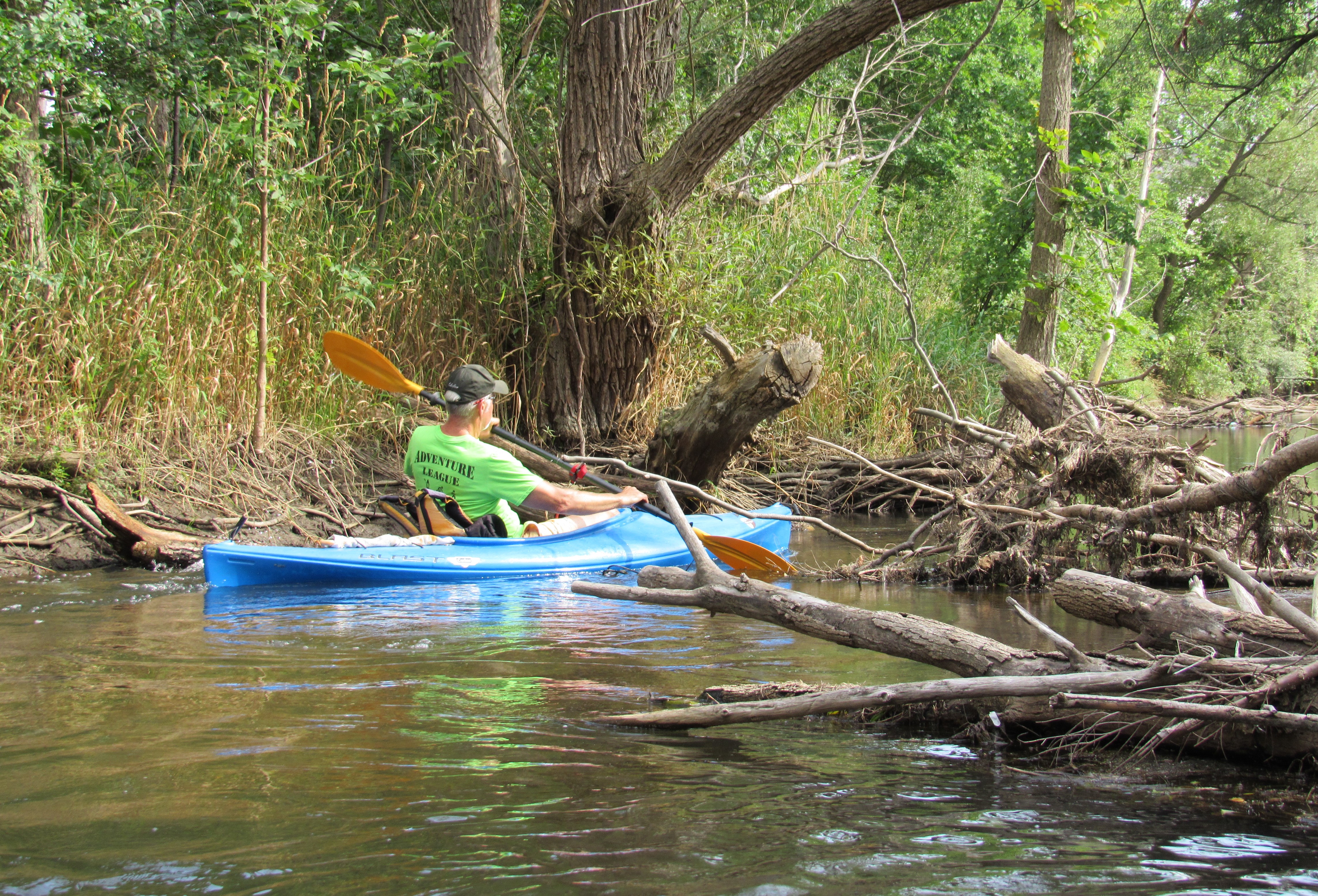 Photo captures were challenging at times as I paddled to avoid the obstacles of branches, trees, sandbars, partially submerged logs, and lesser-experienced kayakers in our group. Visual distractions added to the adventure. A massive trunk of a riverside willow drew my attention when I noted tracks in the mud at its base that were created by a coyote. I paddled on wondering if the creator of the tracks might just be on the other side of the massive trunk, warily watching our passage.

After another bend in the river, one where I briefly ran aground on a sandbar, our small expedition of explorers, adventures, dreamers, and summer fun-seekers passed under a covered bridge and reached the Clinton River launch site: a 2.5 acre riverside park at Elizabeth Lake Road just east of Airport Road managed by Waterford Parks and Recreation. A low-flying green heron greeted us a few hundred feet further downriver. On the next big bend some of us hesitated to watch a great blue heron perched in the limbs of a long dead ash tree. It was there that I noted bluegills in a small pool at the edge of the river, perhaps the reason the great blue heron was not flying off like the frog-hunting green heron did. The heron’s reluctance to take flight also suggested it was accustomed to paddlers; however a painted turtle on a log silently slipped into the waters at my approach.

The sun broke through the clouds just in time to spot a pair of Sandhill Cranes wading in the muddy shallows: most likely foraging for invertebrates in the mud. The Sandhill, like all wildlife in the wetland zone between wildlands and urban areas, follow a behavior pattern that could best be described as “survivability related to adaptability.”

One of the cranes stayed just long enough to capture a fleeting photo, but the loud voices of some paddlers quickly sent them both deeper into the reeds, rushes, and cattails. I made a mental note to return and paddle in the dawn’s early light with just one companion: a much better way to embrace nature on any river. A note: Safety dictates to not paddle alone. Because of the river’s non-buildable flood plain, we did not pass many homes, except in a few locations where they were up on bluffs. At one of those locations a dog sat next to an empty lawn chair passively watching our river journey, perhaps its way to enjoy a summer evening.

As our adventure came to an end after two hours of leisurely paddling, I asked Jim Lloyd, the organizer and leader of the Adventure League, more about their outings.

“The Six Rivers Adventure League is an outdoor recreation activity designed to showcase the outstanding recreational opportunities we have right near home. We have an amazing array of public park lands within the urban environment, but the accessibility of these lands is relatively undeveloped. The Adventure League exposes people to the hiking, biking, and river paddling adventures available close to home and how to access these places. We have lots of fun and get to see some real gems that people don’t know exist,” he replied. 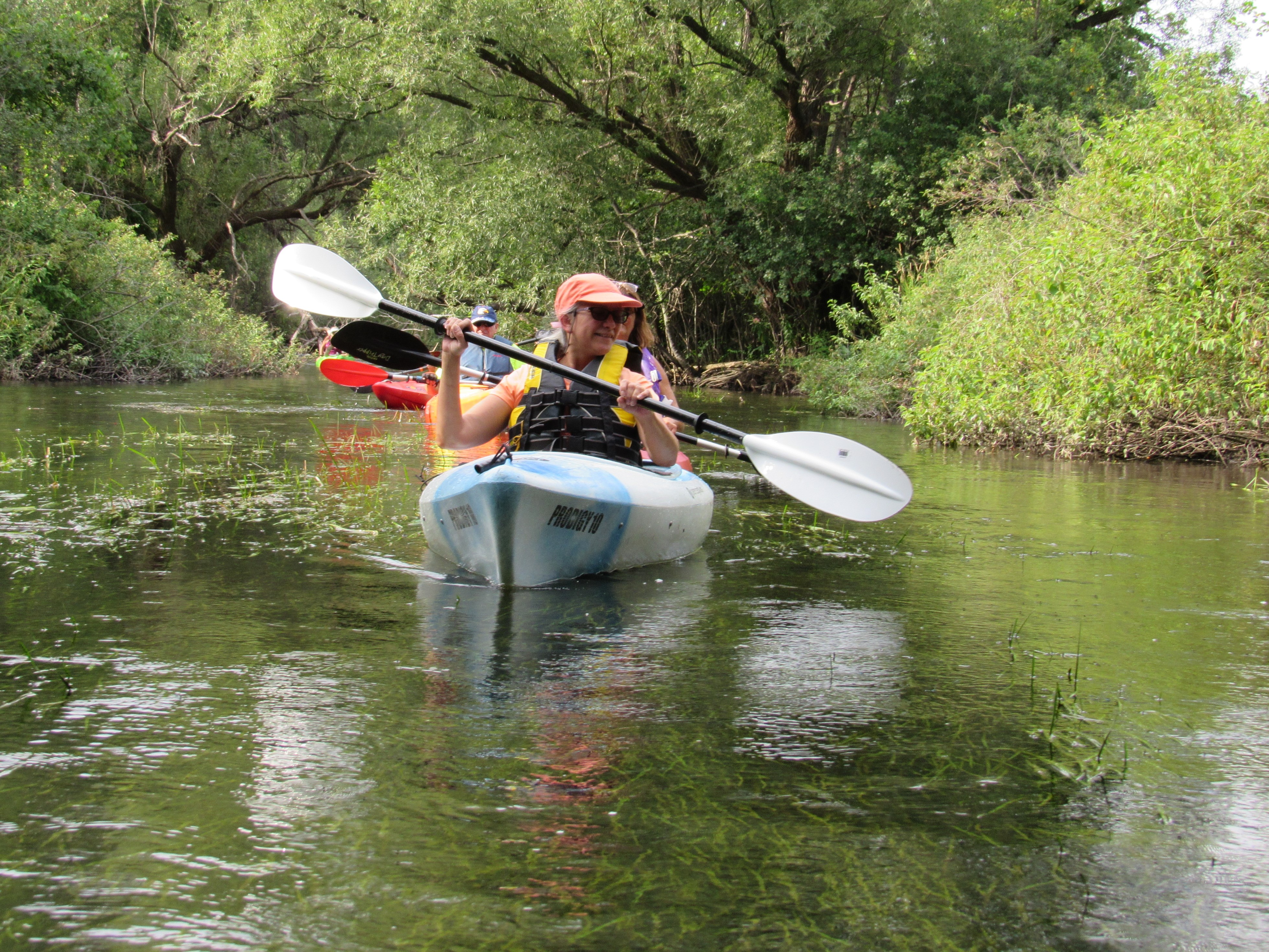 For more information on the adventure league and upcoming outings visit their website. 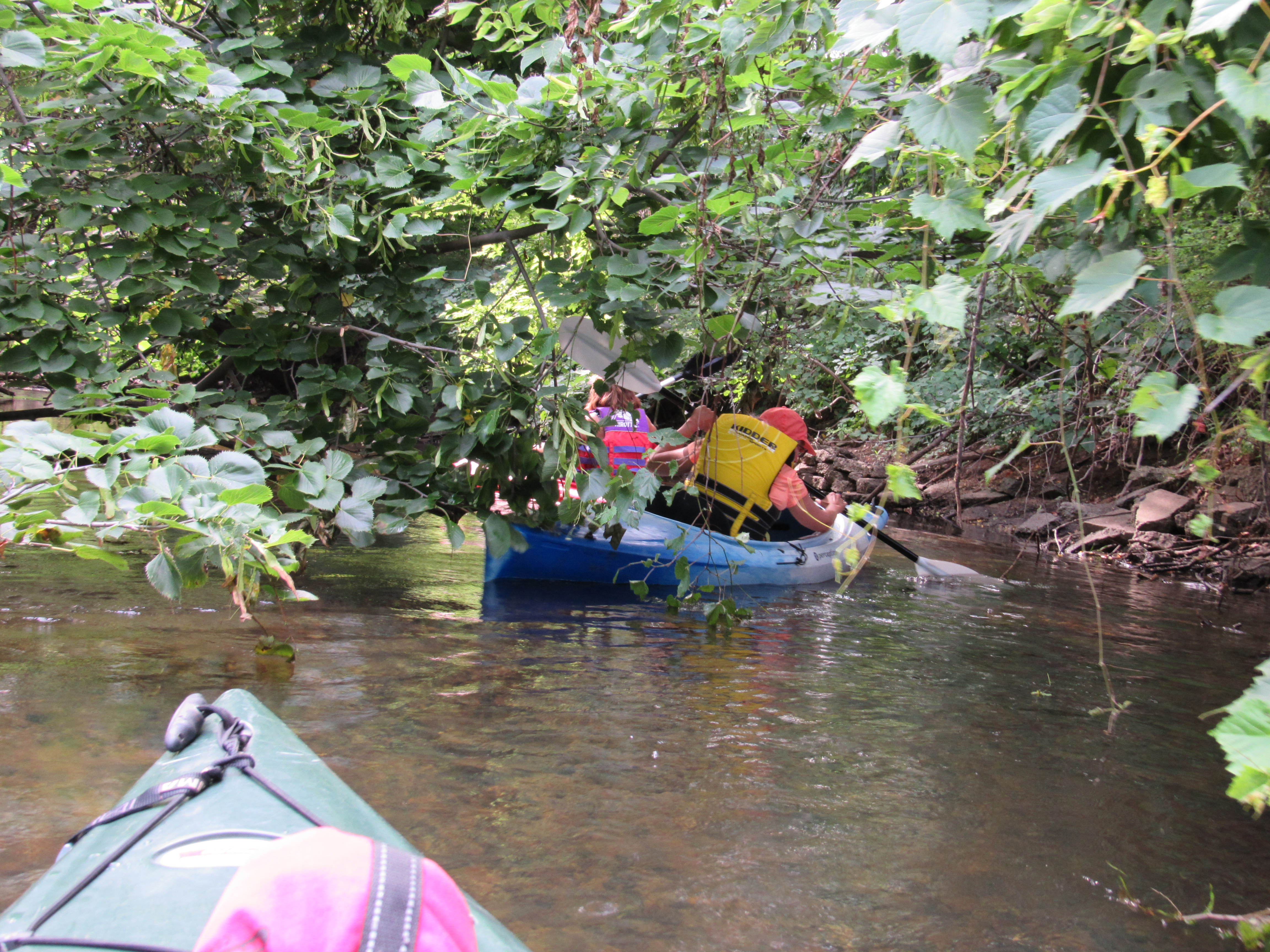 Some safety tips are worth mentioning before attempting to replicate this adventure. First and foremost, it is a section of water trail where one must duck under tree branches and navigate around partially submerged logs and brush, making this paddle impractical for first-timers. Unless attention is paid to ‘reading’ the waters, it is easy to run aground in many locations, so be sure not to be barefoot should it become necessary to exit the kayak. Paddling during flooding conditions is foolhardy at best and darn right dangerous at worst. The river is part of the Clinton River Watershed. Heavy rains in the watershed can cause rapid water rises and strong currents and a life-threatening hazard: strainers. Strainers are piles of brush, logs, and low-hanging tree limbs that can trap and drown even an experienced kayaker when currents are strong. The wise paddler watches the weather. 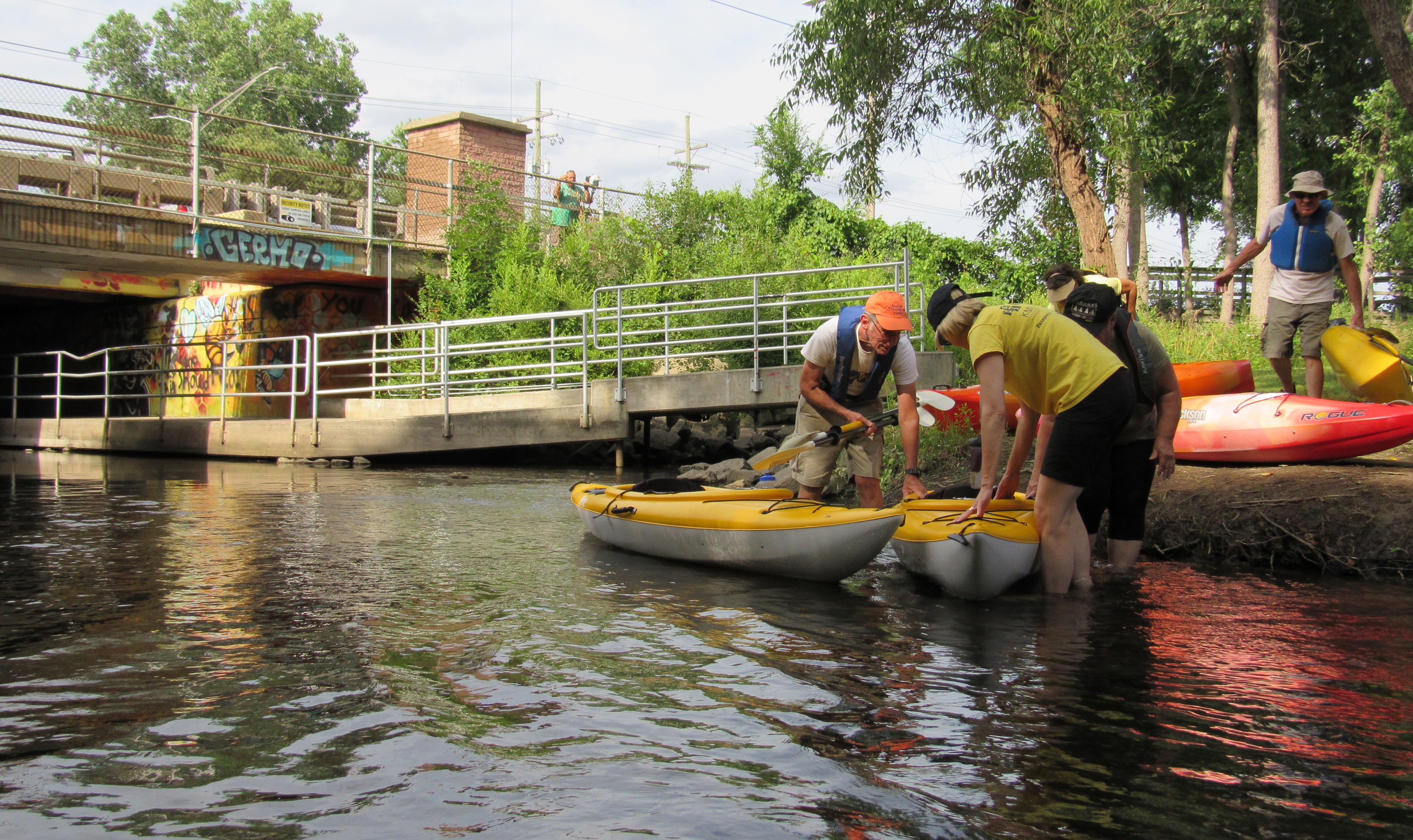 The entire Clinton River Water trail is about 80 miles long and generally flows eastward to Lake St. Clair. Our small section was the exception. It flows to the south and slightly to the southwest before making its eastward turn. The river is not navigable in the City of Pontiac. There it was buried decades ago under the streets as urban development surged and flooding became an issue. The Urban Land Institute is working with others to explore the possibility of ‘daylighting’ that hidden section and wrote this in their 2013 feasibility study introduction: “From the time of Pontiac’s founding in 1818, all the way until its mid-20th century auto industry boom, the Clinton River flowed freely through the city. However, during the 1940s and 1950s, the Clinton River went through numerous periods of high flow, causing catastrophic flooding throughout downtown Pontiac. As a result, in 1963 the construction of the Clinton River Drain No. 1 was completed, eliminating the flooding issues by enclosing the river in a 10-foot-high by 10-foot-wide reinforced concrete double-box conduit running below the downtown area for approximately 3,000 feet.”

Perhaps one day dreamers, planners, engineers, and paddlers will find a way to free the river from its urban entombment and return wildness and paddling adventure to all residents of Oakland County from the headwaters of the Clinton River in Independence Township all the way to where it enters Lake St. Clair in Harrison Township, just south of the Selfridge Air National Guard Base. 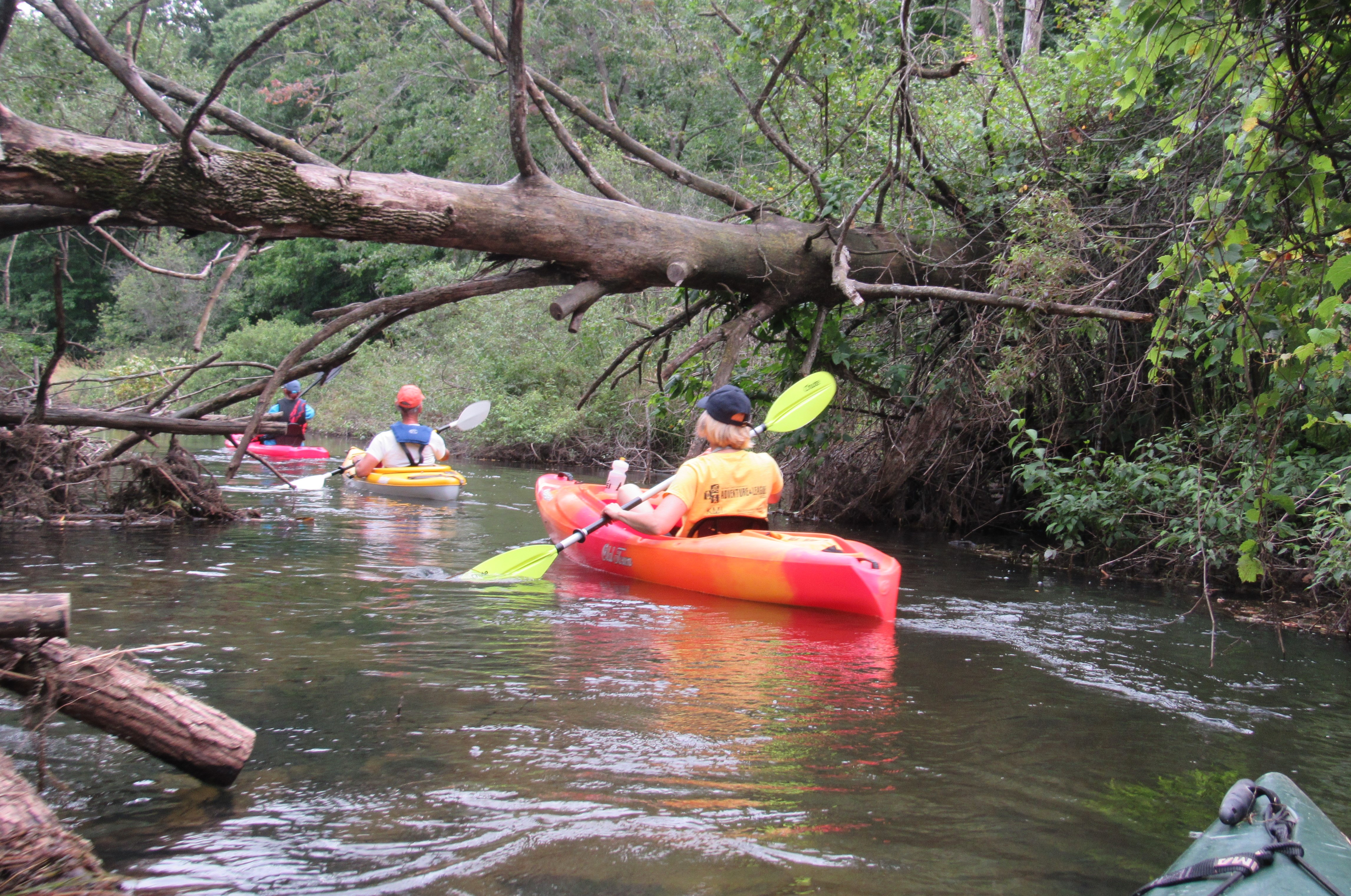