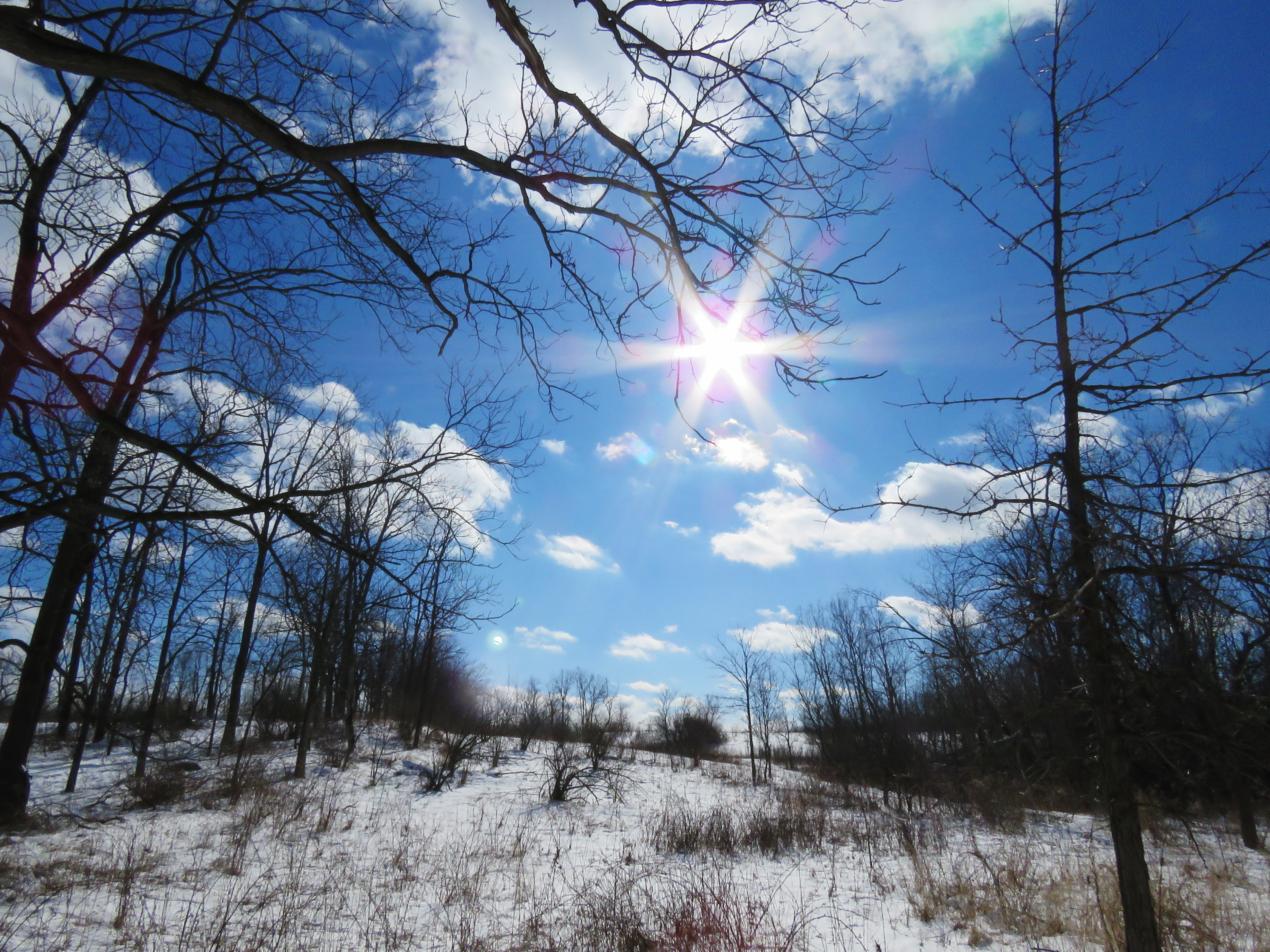 “Climb the mountains and get their good tidings. Nature’s peace will flow into you as sunshine flows into the trees. The wind will blow their own freshness into you and the storms their energy, while cares will drop off like autumn leaves.” Those words of John Muir fit my exploration of Bear Creek Nature Park last Friday afternoon. The temperature hovered just above the single digits, strong winds rustled dry oak leaves, and long-missing brilliant sunshine made snow sparkle.

Bear Creek is a publicly accessible 107-acre park that has been managed by the Parks and Recreation Commission of the Charter Township of Oakland since 1977. Parking permits are not required. There are no bears at Bear Creek, and Bear Creek is not a wilderness by any means, but the landscape has a rich history of farming and cattle grazing going back to European settlement in 1827. 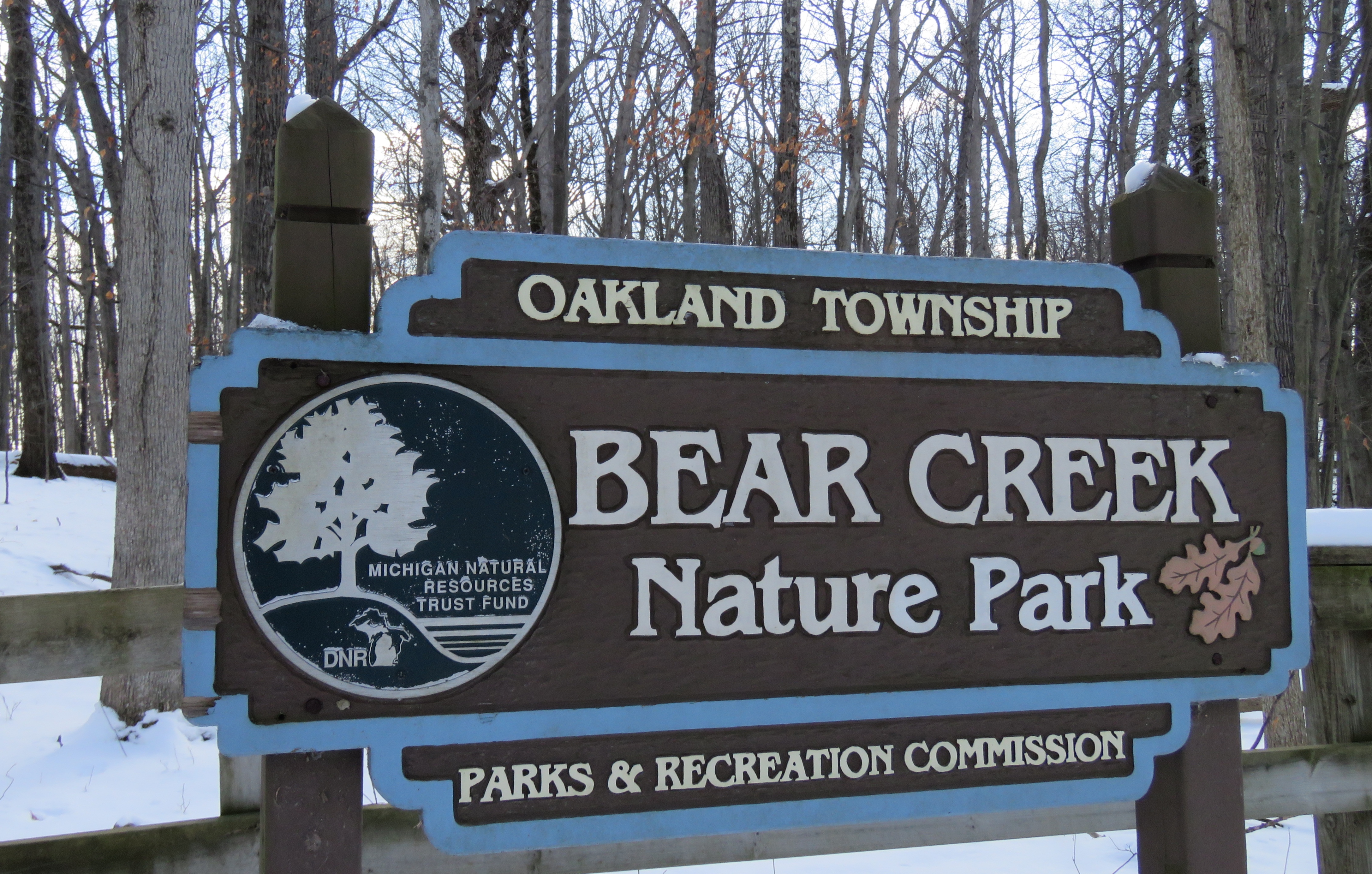 The rectangular shaped park has three entrances. The most frequently used one is on Snell Road, east of Orion Road, and includes a parking area, a rentable picnic shelter and playscapes for children, as well as a small kiosk at the trailhead. Entry to Bear Creek can also be made from the Township hall parking lot off of Collins Road where hikers can follow an uphill meandering trail to reach the park from its west side. The north side of the park has a pedestrian entrance on Gunn Road. I suggest printing the online map to check your options before heading to Bear Creek.

I entered Bear Creek from the south side on Snell Road and after checking the trail map, headed for the dot on the map designated as an “Interpretive Node”. To reach it I first crossed a small snow covered boardwalk that embraced a frozen wooded wetland. All was still except for trees creaking in the wind, and a lone Downy Woodpecker exploring for grubs. The trail then followed a large field with remnants of last year’s wildflowers, including tall dried flower stalks of mullein.

At the Interpretive Node, glacial boulders had been arranged in a pleasing semi-circle, and would be superb sitting spots for a spring day. However, the prominent interpretive panel overlooking the meadow was completely blank, and so I let my mind wander to create an imaginary seasonal message. “In winter dark, this field comes alive with things pure and simple. Great Horned Owls swoop low on silent wings, and a rabbit becomes the meal. A distinctive pattern of meandering tracks indicate a skunk; breeding season has arrived. And in the dawn’s early light, a lone red fox may leap and pounce in snow in hopes of a meadow mouse entree. What tracks will you find in these former farm fields?” But with the wind howling, and biting at my cheeks, I placed my imagination on hold and hiked on towards the north end of the park. 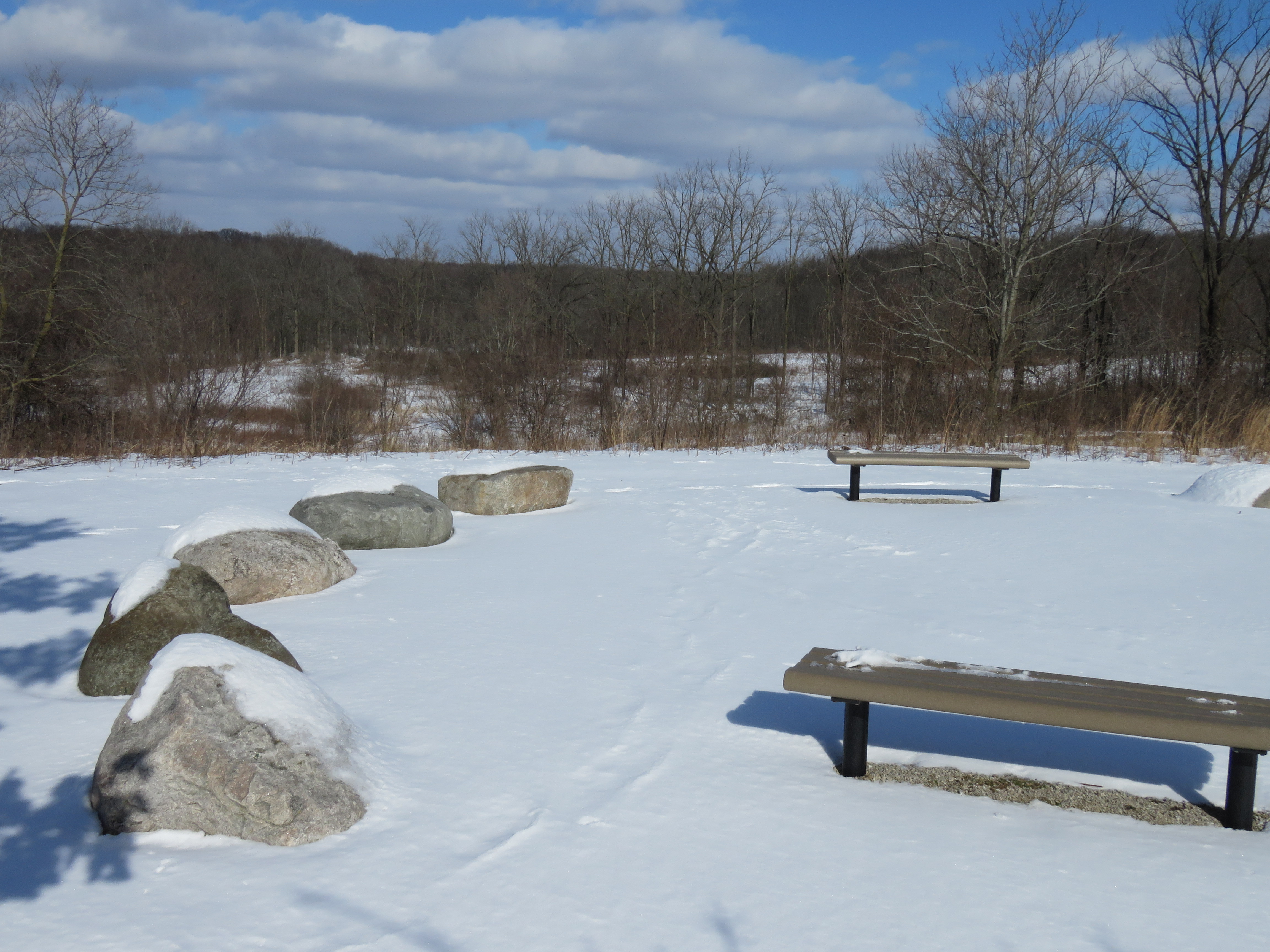 A stately oak with a massive trunk and outstretched limbs stood guard at the edge of a small pond near one of several observation decks. I continued into the woods past large windfalls that most likely sheltered hibernating wood frogs and salamanders, and then discovered extremely fresh tracks of an Eastern Coyote. I suspect, he, or perhaps she, bolted at my not-so-silent crunchy snow approach. No far away, rabbit tracks headed for a thicket, perhaps a wise move. The landing location of the rabbit’s larger hind feet, landing in front of the smaller front feet, show the direction of travel of the fast-hopping rabbit.

After meandering trails in the northeast corner that presented wintery views of marshes, I explored an ice covered vernal pond and then reached a small display board near the north entrance. I was pleased to see it included information on peaceful coexistence with the eastern coyote.

It was a refreshing walk over the rolling hills, across open fields, around wooded swamps and frozen wetlands and into heavily forested sections with mature oaks, hickories and black cherry trees. And as John Muir would have said, cares dropped off like autumn leaves. But after two hours of meandering about this peaceful Oakland Township nature park I hiked back up hill to my starting point and decided it was time to come in from the cold.

My final destination was the historic Paint Creek Cider Mill at 4480 Orion Road in the nearby village of Goodison, just a very short drive away. There’s a rustic and cozy café on the ground floor that serves hand-cut sandwiches, salads, homemade pizza, baked goods, burgers, wraps, and even ice cream. My order was simple and satisfying: hot cider with a cinnamon stick. The old mill is also home for the administrative offices of Oakland Township Parks and Recreation and the Six Rivers Land Conservancy, and is adjacent to the Paint Creek Trail, Michigan’s first non-motorized Rails to Trails project. Consider the mill the perfect place to warm up and fuel the body before or after a Bear Creek adventure on this rather tame, but still Wilder Side of Oakland County.