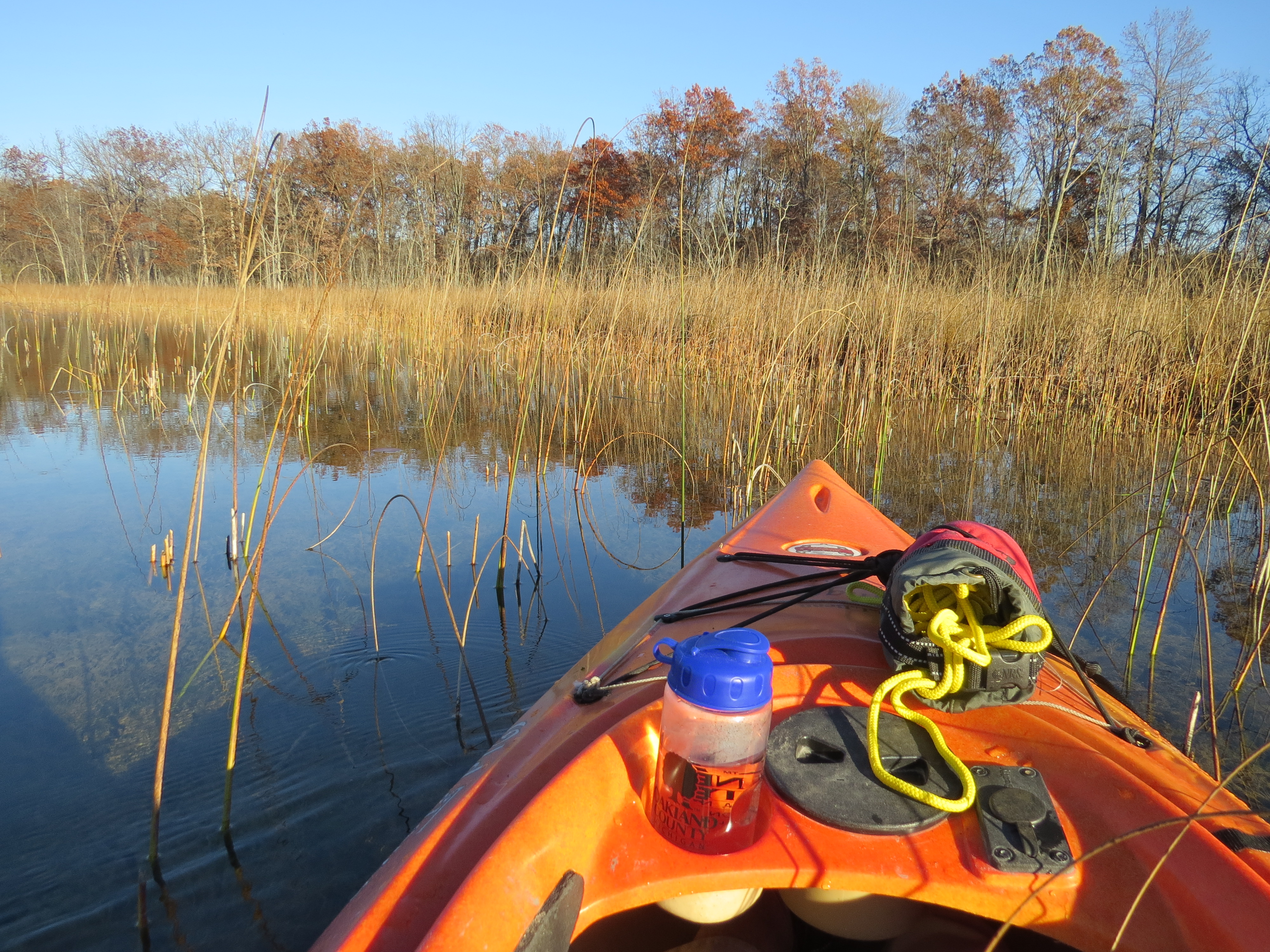 The only thing missing as I paddled Crooked Lake on November 3rd with the temperature soaring and sunlight illuminating the smoky-gold tamaracks, was a book. Not just any book, but A Sand County Almanac by Aldo Leopold, who was a conservationist, philosopher, forester, statesmen, naturalist and writer. This book has fueled my never-ending passion for nature’s way. Perhaps the reason his timeless words seared their way into my mind was his ability to see nature’s way in the simple and the complex, the fragile and the rugged. With each season his words remained as powerful and unstoppable as the gales of November. I think of Leopold’s words the most in November, when some creatures slip away into hibernation and others gather in great flocks, and the seasons duel.

Before my first paddle stroke sliced through the calm waters, I heard them, and then saw them: a flock of high-flying Sandhill Cranes. Their trumpeting was powerful and undeniable. My mind raced back to Leopold and a few sentences that grabbed me decades ago,

“When we hear his call we hear no mere bird. We hear the trumpet in the orchestra of evolution. He is the symbol of our untamable past, of that incredible sweep of millennia which underlies and conditions the daily affairs of birds and men.”

I was empowered by those words years before I encountered my first Sandhill Crane, but it was Leopold, perhaps even more than Thoreau or Emerson, that set me on the path I still follow. I smiled as the sleek cranes came into view and flew artistically overhead. With the warmth of the sun on my neck I pushed off to paddle the shoreline of this glacial gem nestled between the hills and meadows of Independence Oaks County Park.

Another 10 minutes slipped by with wind so faint that the shoreline grasses barely moved, and the sound of chickadees flitting about branches wafted over the lake. I passed a gnawed log floating in the water with fresh marks. I watched the shoreline closely as wood ducks exploded into flight and oak leaves floated between lily pads. Then I saw a freshly cut aspen tree which reminded me that in spite of the warmth, beavers knew it was time to stock their winter pantry. Not far from the aspens, and very near the oaks, red squirrels and chipmunks scurried feverishly about with the squirrels chattering loudly on what I presumably was an acorn gathering mission. Though decades of reading Leopold has taught me not to presume, for in nature’s way, creatures are always adapting to their environment.

Something shining caught my eye so I slowly paddled closer. An Eastern Painted Turtle sunned on a shoreline log in November! Maybe the turtle forgot it was time to settle into the muddy bottom for the winter, or maybe it just wanted to sun one more time. I smiled, for most paddlers were done for the season but I wasn’t, and neither was the turtle. Just beyond the turtle, a flash of scarlet turned out to be Poison Sumac, still dressed for autumn and rich with a crop of berries

Entering a bay, my slow approach barely budged three Mute Swans. One just glanced my way and folded its long neck and head back down to float and nap in the November sun. While they can disrupt our native Trumpeter Swans, the momentary peacefulness and solitude of their season in the sun could not be disputed.

As my second hour on the lake came to an end, the shadows were long and the mallards were edgy and restless. I watched a few joggers pass by along the Lakeshore Loop, a 2.4 mile pathway that follows a wooded glacial moraine on the west side of Crooked Lake. Their sudden attention to a doe frozen motionlessly near the shore on the far side was broken by a new sound. “Out of the clouds I hear a faint bark, as of a far-away dog. It is strange how the world cocks it ears at that sound, wondering. Sooner it is louder: the honk of geese, invisible, but coming on.”  I finished my paddle as the geese seemingly skidded into a water landing and was greeted by a Sheriff’s Deputy on his terra firma shoreline patrol. I didn’t tell him I was paddling with Leopold, but I was.

Why not make November your opening chapter to explore the woods, waters and trails of Oakland County Parks? You just might be glad you did; and bring along Leopold’s classic, a book of discovery that opens eyes to nature’s way on the Wilder Side of Oakland County. “It is warm beyond the driftwood now, for the wind has gone with the geese. So would I – if I were the wind.”